When Covid-19 shut down in-person classes in March 2020, Clark Jones ’89 (MS ’92) retooled his lesson plans to finish the semester online. The senior instructor of biology revised the syllabus for Microbiology of Human Disease to reinvent student labs, a key component of his popular course.

Grace Watkins was midway through the class and enthralled with the hands-on labs. The nursing major finished the spring semester of her freshman year at home in Kansas City, Missouri.

Upon returning to TCU for fall 2020, she became one of six teaching assistants for the class. Typically these assistants work shoulder-to-shoulder with students in the lab. Instead, she led discussions and answered questions via Zoom.

Watkins worked hard “to connect students with the experience I had in person, but it’s such a fun lab and meant to be hands-on.”

In one lab session, students observe the bacterial arrangement of Streptococcus pyogenes (the organism that causes strep throat) and then look at Staphylococcus aureus (the bacteria that cause skin infections).

Something as simple as peering into a microscope became a challenge because of Covid-19. But the havoc the pandemic wreaked on academic life at TCU in the spring led to a summer of rigorous preparations for a path forward.

Starting in August, professors could either engage in hybrid teaching — a single class taught to both in-person and online audiences — or fully virtual classes.

The crossroads of making a class available to any student who wanted to take it online spurred professors to harness technology in ways that managed to advance their teaching and jump-start student engagement.

“TCU professors are experienced and talented educators,” said Sean Atkinson, associate professor of music theory. “We have worked hard to ensure that our academic experience wouldn’t be hampered by the delivery method.”

For the most part, professors chose how they would teach their classes: online or hybrid. If an instructor wanted to teach a larger class in person, the university tried to find a space big enough to meet social distancing requirements, or they had to divide the class up on alternate weeks to meet that requirement. Jones opted for a hybrid format for Microbiology of Human Disease. TCU’s IT department purchased technology, including a large TV/computer monitor that could connect with the lab microscope so that whatever he saw through the lens could be viewed by remote students. A mobile cart with a camera and microphone allowed online students to see the projected images from the microscope and the lab room and hear the explanations of the images and lab exercises.

Figuring out an approach to the lab’s 24 spaces proved trickier. In the end, Jones divided students into four groups so that no more than eight people, himself included, would occupy the room at the same time.

He reduced lab sessions from three hours to one hour and 15 minutes to accommodate the four sections. The experiments didn’t change, but lab time became more precious, which shifted some lab lectures and quizzes online.

Typically, he’d have three undergraduate lab assistants work with students on how to focus microscopes, examine bacteria and perform other tasks. For the fall, on alternate weeks when students weren’t in the lab, Jones had his student helpers lead class via Zoom.

“The course advanced the TA’s in terms of their leadership and as teachers of biology,” Jones said. “They realized quickly how hard it is to be an expert in the field as questions were thrown at them.”

During spring break of 2020, few could have predicted the enduring impact of the virus.

Sophia Vandewark, now a sophomore journalism and political science major, had to ask her resident assistant to ship her books to her suburban Seattle home so she could finish the interrupted semester.

Upon landing in Lexington, Kentucky, for the NCAA Rifle Championships, Stephanie Allan, a sophomore nutrition major from Greenwich, Connecticut, learned the competition had been suspended because of the virus.

Both Vandewark and Allan opted to return to campus in the fall. “Spring was frustrating for everyone,” Allan said, “but when we got back to campus in August, you could tell the faculty had a good grip on what was going on.”

Professors and staff had spent all summer preparing for a new style of teaching, one that meant they weren’t necessarily physically in the classroom.

TCU hired eTrainers for every college, and all faculty completed a training program in hybrid teaching designed by the Koehler Center for Instruction, Innovation and Engagement.

Joanna Schmidt, interim director of the center, said it offered more than 100 workshops on using TCU Online, a system designed to manage virtual education by posting course materials, giving feedback and promoting student engagement through activities such as message boards. Mikio Akagi, assistant professor of the history and philosophy of science in the John V. Roach Honors College, opted to teach from home during the fall semester, meaning the onus was on him to make sure his technology worked. Courtesy of Mikio Akagi

As the fall semester wore on, Mikio Akagi, assistant professor of the history and philosophy of science in the John V. Roach Honors College, said discussions in his classes became richer.

In November, the 15 students in his Philosophy and Science of Social Justice class participated in a robust exchange on language and dialects. When the focus shifted to a reading on Black American English, students discussed how white middle-class Americans might pepper their speech with Black slang to sound either funny or intimidating.

Many students agreed that constituted a problematic use of dialect, with one student describing the practice as “linguistic blackface.”

Fostering an environment for such in-depth and relevant discussions was at the heart of what Sandra Callaghan ’88, associate professor of accounting and director of the Center for International Studies, described as TCU’s rigorous campuswide response to education in the wake of Covid-19.

“The most tangible way that the provost prepared for fall was technology, which we really pushed to leverage,” said Callaghan, who noted that TCU made the decision to equip all classrooms with the technology that would allow faculty to teach simultaneously online and in-person.

Weeks before students returned for the fall semester, Joshua Tooley, director of IT Support, and his team installed cameras at 268 locations around campus. They also ensured students would have access to all the software resources they would need.

“The biggest challenge and most stressful piece was the procurement of the cameras, which were sold out everywhere, and then getting them all installed by the first day of school,” Tooley said. “It was really a team effort.”

Most professors had to learn a new way of teaching. They had to project through masks and ensure that online students could see them clearly on screens at home.

A paramount concern, Atkinson said, was to make sure all students received an equivalent level of educational excellence.

Akagi opted to teach from home during the fall semester, meaning the onus was on him to make sure his technology worked.

He spent the spring and summer augmenting his home studio, which he equipped with everything from a tripod and ring lights to a microphone that clipped onto his clothes.

He purchased a backdrop that enabled him to work in different parts of his apartment without worrying about how everything looked. That proved particularly helpful during virtual office hours.

“I also encourage my students to turn their cameras on and use video during discussions,” he said. “I think it makes discussions better.”

Conversations are deeper, he contends, even when “face-to-face” has to happen over Zoom. In his Disease, Disorder and Disability class, undergraduates participated in 90-minute discussions every Wednesday.

“There are a few more collisions and interruptions in Zoom, but both people usually try to defer to each other,” said Akagi, who noted the discussions often delve into the subject matter and the students’ life experiences. In the fall, the professor of professional practice in the department of management and leadership in the Neeley School of Business taught students from Honduras, Singapore and India. Despite differing time zones, the international students joined live class sessions and seemed to speak up more often than when in a traditional classroom.

“We are having more meaningful discussions on how to manage people the most effective way in the business space,” said Bluntzer of both her undergraduate course, Critical Thinking in Organizations, and her MBA class, Transformational Leadership.

She was “pleasantly surprised” at how students came to class more prepared than before the pandemic. She surmised that the accountability inherent in having their names and faces on the screen spurred the extra effort.

Jones likewise considered TCU’s accommodation of international students one of the bigger victories arising from the Covid-19 crisis. He has a student in Vietnam who takes an 8 a.m. microbiology class at 8 p.m. Vietnamese time. That student was one of about 12 percent of those in Jones’ classes who opted to remain remote for fall.

For Andrew Romero, a senior movement science major, fall 2020 felt like a significant departure from the four previous semesters he had worked as a teaching assistant in the microbiology lab.

“One of the really smart things Dr. Jones did was require these mentoring meetings with students as a check-in point on how they’re feeling,” Romero said. “I thought students might be unwilling to talk in small groups, but it was almost unanimous that these students felt the meetings were helpful.”

Jones said he plans to keep the mentoring meetings as small groups, whether in-person or online. “The students seemed more willing to share their successes and failures.”

“Taking courses online requires a certain degree of determination and persistence that students don’t necessarily have to have with in-person.”
Matthew Bolding

Rebecca Dority, associate professor of professional practice in the department of nutritional sciences, found inspiration in the online-only format for her Contemporary Issues in Nutrition lecture-lab class, which hovers around 100 students a semester.

“I could have gotten guest speakers who weren’t local in the past, but it wasn’t on my radar,” she said. “This situation opened doors for me to have experts in the field who don’t live here but have a lot to contribute.”

Brett Singer ’10, a sports dietitian at the Ironman Sports Medicine Institute at Memorial Hermann Hospital in Houston, gave Dority’s class an overview of sports nutrition. Page Meachum ’14 spoke to Nutritional Biochemistry students about inborn errors of metabolism and her role as a pediatric metabolic dietitian at Children’s Health in Dallas.

Fine arts faculty came up with creative solutions as well, said Atkinson of TCU’s School of Music. For a midterm composition project in music theory class, he taught freshmen how to record individual parts using software built into most smartphones.

“It’s a way to leverage their situation,” he said. “They’re all going to be musicians, and they’re going to need to know how to use basic video and audio software, which is something I’ve never been able to justify using in a music theory classroom before now.”

For many students, remote and hybrid learning bolstered their work ethic while instilling grit.

“Taking courses online requires a certain degree of determination and persistence that students don’t necessarily have to have with in-person,” said Matthew Bolding, a sophomore mathematics and computer science major. “I feel like I’ve become more responsible, organized and productive.”

At the end of the day, the university community is doing the best it can possibly do, said Atkinson, who credits the less-than-optimal circumstances for compelling him and fellow faculty members to embrace more of what technology can bring to the classroom.

“Because of the pandemic,” he said, “TCU is going to come out stronger than we were.” 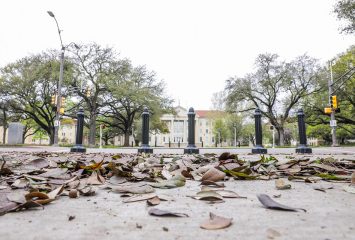