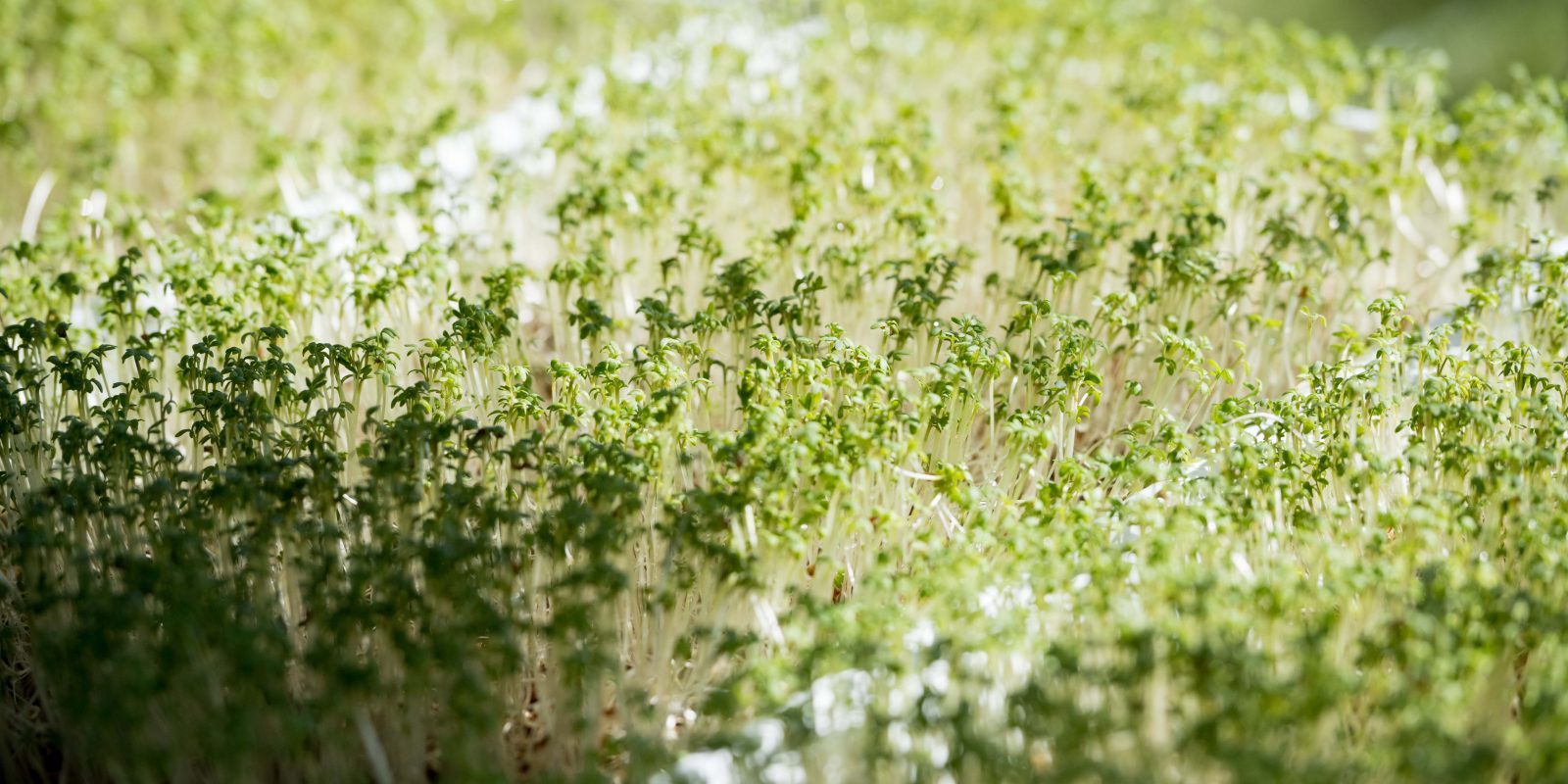 Skincare With a Conscience “I can’t tell you how much we love the dichotomy of these two things,” she said.

McLinden and her husband, Hani Eideh ’93 (MBA ’98), purchased the farm to expand the skin care business, originally run from their Frisco, Texas, home. The grassy hill now includes the company’s office, the couple’s home, a greenhouse for growing vitamin-rich microgreens for the products, and an assortment of horses, donkeys and goats given a new lease on life.

The company is a true family affair. McLinden is founder and CEO. Eideh is president. McLinden’s brother, Scott McLinden ’95, is brand and media director, and his wife, Delia Faulk McLinden ’98, is co-founder and vice president of sales.

The journey started after Shannon McLinden created a foot scrub trio that was lauded by Oprah Winfrey. But the animal lover envisioned more than spa products. Driving with her husband through the Texas countryside one day, she gestured to the ranch homes and acreage they were passing by. “I would love to have a business on a hill surrounded by acres of land and animals we rescue. This is my end game.”

“This isn’t where it ends,” he said in support of her dream. “It’s where it should start.”

A Foot in the Door

When she was young, McLinden learned to crochet dish towels, which she sold door to door. “I love the creation process,” she said, “dreaming up something, making it with your hands.”

While a TCU student studying journalism and advertising, the lifelong tinkerer invented a peel-and-stick liner for flip-flops and sandals to combat sweaty feet. “In Texas it is so hot in the summer, and people are just sliding around in sandals,” she said. “I knew I could figure out something.

McLinden started cutting fabric and then searched for manufacturers. She paid textile experts $50 to serve on her advisory board. A year and a half later, she had a patent.

After the success of the foot liners, McLinden dabbled in foot scrubs for her own dry, cracked runner’s heels. She created a trio of whipped honey, sweet cream and apple sea salt exfoliants. After packaging and patenting the concoctions and hiring a publicist, she got the products in front of Winfrey, who put them on the O-List in 2007.

Today, FarmHouse Fresh creates moisturizers, exfoliants, masks, serums and shea butters that are either certified organic or natural and free of harmful ingredients. The products are offered in thousands of luxury hotels and spas from Dallas to Dubai. While building the company, McLinden learned about phytonutrients, plant-based chemicals that have antioxidant and anti-inflammatory benefits, and microgreens, 7-day-old sprouts that are nutrient-dense. She began growing microgreens of kale, watercress and amaranth in an automated hydroponic greenhouse.

“Even a pinch of watercress or red amaranth provides four times the vitamin content compared to a large bushel of carrots or spinach,” she said. The watercress is a feature of FarmHouse Fresh’s bestselling moisturizer. The red amaranth is a key component of a dry oil designed to give skin a summery glow.

The on-site greenhouse produces tens of thousands of trays of microgreens each year. The FarmHouse Fresh staff picks the greens, which are quickly mixed into products at one of several local labs.

Nearby farms also supply ingredients, such as the cucumbers needed for their caffeic acid. After harvest, cucumbers are delivered directly to the labs, which create extracts within hours. Bushels of the unused rinds go back to the farm to feed the chickens.

The fresh harvesting process gives the products a unique advantage. Often in the skin care industry, extracts are shipped from overseas in hot containers. FarmHouse Fresh works with local farmers as well as scientists who help determine optimal formulas for skin health.

“It’s a complex process,” McLinden said. “It’s not as easy as taking a plant and rubbing [it] on your skin.” FarmHouse Fresh is both an Earth-friendly product line and a sanctuary for abused farm animals. Photo by Leo Wesson

Skin care products are the FarmHouse Fresh calling card, but the furry friends who get a second chance at life are what capture hearts. Every product purchase helps give goats, horses, cows and other animals plentiful food, pastureland, a spacious barn and tender care.

McLinden said she has always loved animals. “I was the kid whose parents had to sit me down to say, ‘No, you can’t bring that wounded bird into the house,’ or ‘Don’t pull over if you see a raccoon in the road that has been hit by a car because you might get hit yourself.’ ” FarmHouse Fresh customers can enter bar codes from purchased products on the company’s website to see the timeline of rescue initiatives. A regular Friday email — “Hey Girl, HAY!” — features a specific animal who receives support from products purchased that day. A camera lets viewers be chased by a donkey or pet a goat virtually.

Lolly, a white Alpine goat, was confined to an 8-foot cage by a previous owner who claimed the goat was mean. Now Lolly has lots of room to roam
and follows people around begging to be petted.

Willow, an 8-foot-tall sorrel Belgian draft horse, is “the most breathtaking, magical creature we’ve ever taken care of,” McLinden said. Willow was a workhorse on an Amish farm. She was dropped off at an auction, didn’t sell because of an infected gash on her leg and was tagged for slaughter. The FarmHouse Fresh team swept in to save her.

Willow’s leg was swollen to four times its normal size, McLinden said. The tendons in her back leg are permanently damaged and cannot support her fetlock bone — it should be vertical but is nearly horizontal.

“We have to wash, clean and wrap her leg every few days,” McLinden said. “Five of us go down to the barn like a NASCAR pit crew. She bows to let us put the harness on. … She doesn’t even blink; she just stands calmly” for the hourlong process.

A Family of Frogs

Delia Faulk McLinden joined FarmHouse Fresh as co-founder to help manage the growing publicity. She now leads and mentors the sales team and represents the company at trade shows worldwide.

“I remember her first day, [Delia] had on this earpiece and was taking calls from spas, and I thought, ‘This is the best day of my life,’ ” Shannon McLinden said.

“People who are successful in work and life are those who put themselves out there, take creative risks, work hard and don’t take no for an answer. They start doing and find a way.”
Delia McLinden

Delia McLinden said she was excited to bring her experience as a marketing professional to the company. “People who are successful in work and life are those who put themselves out there, take creative risks, work hard and don’t take no for an answer. They start doing and find a way.”

Scott McLinden, an experienced broadcast professional, produces videos and blogs about the products and rescues. Shannon McLinden said her brother is “a ball of fire.” He brings analytical skills from a career in investment banking and television production savvy from his other career as a journalist.

Eideh previously directed pension investments for JCPenney and now is helping position FarmHouse Fresh for rapid expansion. McLinden said she applied his financial advice from the beginning — especially his guidance to avoid venture capitalists, not overspend, keep cash or capital in reserve and have a strong relationship with the bank. “These are imperative when you grow ingredients a year in advance and pay farmers a year in advance.” FarmHouse Fresh products are offered in thousands of luxury hotels and spas from Dallas to Dubai. Photo by Leo Wesson

Eideh’s highest priority — now that he is a full-time member of FarmHouse Fresh — is to strategically finance the expansion of the business, he said. “So far growth has been astounding.”

Eideh and McLinden live on the farm, which helps them keep the business blend in balance. “It certainly makes every day an exciting stroll through the farm,” Eideh said.

A team of employees includes Horned Frogs in internships and full-time positions. Francie Ronan ’14, a copywriter and social media coordinator, and Elizabeth Tausch ’12, a retail sales associate, are part of the media and sales department.

“We love hard workers with positive attitudes who don’t shy away from any opportunity,” McLinden said. “Most of our employees have done a little of everything over the years, and my guess is that most would tell you that working in a fast-paced company with an entrepreneurial spirit, they can just about figure out anything that comes their way.”

A skin care product line meshed with a mission to save farm animals means no two days are the same. “One day you might be helping determine new product launches or working a 14-hour day in cowboy boots at a spa trade show, and the next you might be helping rescue a goat,” McLinden said. “It’s never a dull moment, and that’s how we like it.”