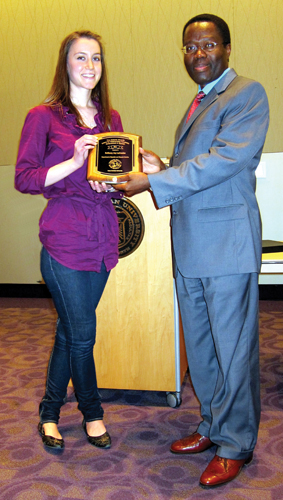 He taught at TCU from 1965 to 1979, serving as a professor and chair of the department of modern languages.

Rivarés died last year, but his legacy lives on thanks to a new award recognizing outstanding scholastic achievement in the Department of Spanish and Hispanic Studies named in his honor.

“I must point out that when I asked colleagues to contemplate in whose name we should create this award, the name Antonio Rivarés popped up immediately, and it stuck, with no debate whatsoever,” said department chair Komla Aggor.

The first recipient is Bethany Lacombe, a May graduate majoring in Spanish, history and anthropology from Southlake. She studied abroad in Sevilla, Spain, for a semester and volunteered her services in several local schools teaching Spanish and English to young children.

“Despite a heavy load and competing academic requirements, Bethany has received nothing less than an A grade in every course she has taken at TCU since her freshman year,” Aggor said in presenting the award at the department’s inaugural awards day ceremony in April.

The department also presented Faculty Choice Awards for Excellence in Spanish to students who achieved overall best performance in the courses taught during the year.