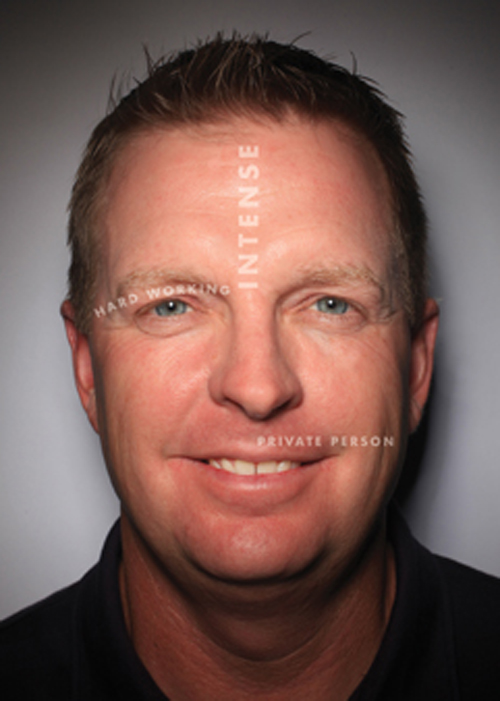 The vertical line between his eyebrows is what I call a “freight train” line. This line indicates that he is intense. When he focuses on something he goes all out for it and lets nothing stop him. Like a freight train, once he is committed you should either get off his track or get on board, but don’t expect to stop him.

Low eyebrows show his quickness of mind. He can anticipate what people will say and may have had 10 thoughts on the topic while they were saying it.

His deep set eyes mean that even though he may look relaxed and laid back, he is aware of everything around him. However, don’t think that if he is nodding his head while you are talking that he is agreeing with everything you are saying.

His thin nose tells me that he is self-reliant and self-sufficient. If asked if he needs help he will most often decline, even if he could have used some help. However, his large nostrils are the mark of a generous spirit who is ready to help the other person.

He is working too hard. Those droopy upper eyelids say that he has been giving more of his life energy and life force to everything else.
His thin upper lip tells me he is a very private person that plays his emotional cards close to the vest. However, if he ever tells you something, you can take it to the bank.

In his professional — or business side (the right side of his face) — he has a managerial eyebrow, thin at the beginning and getting larger toward the outside of his face. Once he takes something on, it is done.