A humanizing reformation in the Texas criminal justice system started with an unlikely hero. In 1993, Karyn Purvis ’97 (MS ’01, PhD ’03), then a 47-year-old mother of three, enrolled at TCU to finish an undergraduate degree in child development. Six years later as a doctoral candidate, she partnered with her mentor, David Cross, to create a summer camp to help adopted children bond with their new families.

That camp became the foundation for TCU’s Institute of Child Development. Purvis and Cross co-authored The Connected Child: Bring Hope and Healing to Your Adoptive Family (McGraw-Hill Education, 2007), which remains a bestseller on Amazon. The book introduced a set of practices parents could use to bond with their adopted and foster children, a method the authors later named Trust-Based Relational Intervention.

It turns out those bonding techniques also work for people — from police officers to sex trafficking victims — involved in the criminal justice system.

The methods focus on making mindful connections. Examples include getting down to eye level with children, paying close attention to the tone, volume and cadence of the voice, listening and offering choices, and being playful in interactions when possible. These small actions can make a big difference with both children and adults. Purvis died in 2016, but her work to help adopted children continues to expand to unexpected places, including residential facilities that serve sex trafficking victims. TCU renamed the institute in her honor.

Purvis had been working on a book that was completed and published in 2020: The Connected Parent: Real-Life Strategies for Building Trust and Attachment (Harvest House Publishers). The book, co-authored by Lisa Qualls with contributions from Emmelie Pickett ’09 (MLA ’15), tells the stories of parents and children who have used Purvis’ methods to bond and heal as a family.

Cross, now director of the Karyn Purvis Institute of Child Development and a professor of psychology, deepened his studies on the psychological effects of trauma to better understand how to help victims heal.

Researchers have found that in children who experience trauma, the corpus callosum, which functions as the communicator between the left and right hemispheres of the brain, has been affected. This results in slower cognitive function and delayed reaction times. So when a teacher tells students to stop cutting and put down their scissors, a child who has endured trauma may take an extra 10 to 15 seconds to register the command. Teachers may punish the child because those actions are perceived as disrespectful. The institute’s intervention methods encourage a better understanding of why those behaviors occur so adults can help the child succeed.

Cross said that the relational methods used for adoptive and foster families could extend to almost anyone, including teachers and counselors in classrooms, doctors in hospitals and judges in courtrooms.

After all, trauma is a common experience.

Karen Furman ’03 MEd (MBA ’09, EdD ’09) is a project liaison for the resulting joint effort between the state government’s trafficking team and the institute. Serving as the principal investigator for the project, Transforming Cultures of Care, she helps coordinate Trust-Based Relational Intervention training for the many entities — police, courts, legal advocates, residential care facilities, schools, hospitals and shelters — that deal with trafficking victims.

She said the institute steps in to ensure that each organization is trained in the techniques. As of August, the institute had trained more than 2,000 people and partnered with 38 organizations involved with child and youth sex trafficking and trauma support across the state.

The improved approach centers on building trust and creating an understanding of how trauma can change a person.

“Survivors have experienced significant trauma that impacts their behavior, and that behavior may be difficult for all involved.”
Karen Furman

“Our challenge is to help organizations adopt a more relational mindset,” Furman said. “We encourage trainees to view behaviors through a trauma-informed lens, seeking to understand the need behind the behavior and working toward meeting that need. Survivors have experienced significant trauma that impacts their behavior, and that behavior may be difficult for all involved.”

At one emergency shelter for at-risk youth in Houston, Furman said, staff members were frustrated and concerned that those in their care were running away to a dangerous part of the city known for targeting victims for sex trafficking. After the staff received TBRI training, there were no runaways for 45 days.

According to the Texas attorney general’s office, 79,000 children are victims of sex trafficking in Texas at any given time. Furman knows that trauma-informed care can help victims as they are being extracted from these situations. “I had always thought trafficking was some distant threat that happened somewhere else … but it’s in our midst, and it’s under our noses.”

A New Kind of Police

Earlier this year, Cross began to work with the Texas Department of Public Safety to develop a training module on using trauma-informed tactics to de-escalate conflict. The department’s more than 80,000 officers will watch and discuss four 30-minute videos that detail how the Purvis Institute’s relational methods can help them handle stressful and potentially violent situations. David Cross is working with the Texas Department of Public Safety to develop a training module on using trauma-informed tactics to de-escalate conflict. Photo by Glen E. Ellman

Cross said when he first talked with department officials, he realized they needed techniques to remain mindful and calm while simultaneously establishing a sense of control when responding to calls.

When adapting the trust-based methods for officers who needed to dissolve tensions, Cross saw that the advice was the same as what he and Purvis had always given to adults who dealt with misbehaving children and youth.

“From a human psychology standpoint, it’s no different than a teacher who’s got a kid who’s throwing chairs at them in their classroom, or a parent who’s got a child who maybe pulled a knife on them,” Cross said. “The human element is exactly the same.”

Cross hopes the sex trafficking and law enforcement trainings in Texas will serve as examples to other states. When he and Purvis embarked on their research in child development, he said, he did not foresee the tremendous impact the TBRI method could have for thousands of people.

He compared the institute’s approach to climbing hills: “It’s the idea that I want to go up and I want to go in that direction, but I can only see the first hill. So I’m going to go there, and then I’m going to look and see how I did and where do I go next. And then I go to the next hill, and then I keep moving up. But I don’t know how I’m going to get there until after I look back and see, and that’s very much how the work with the Purvis Institute has been.” 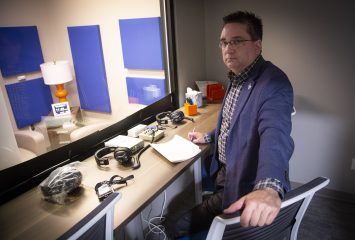