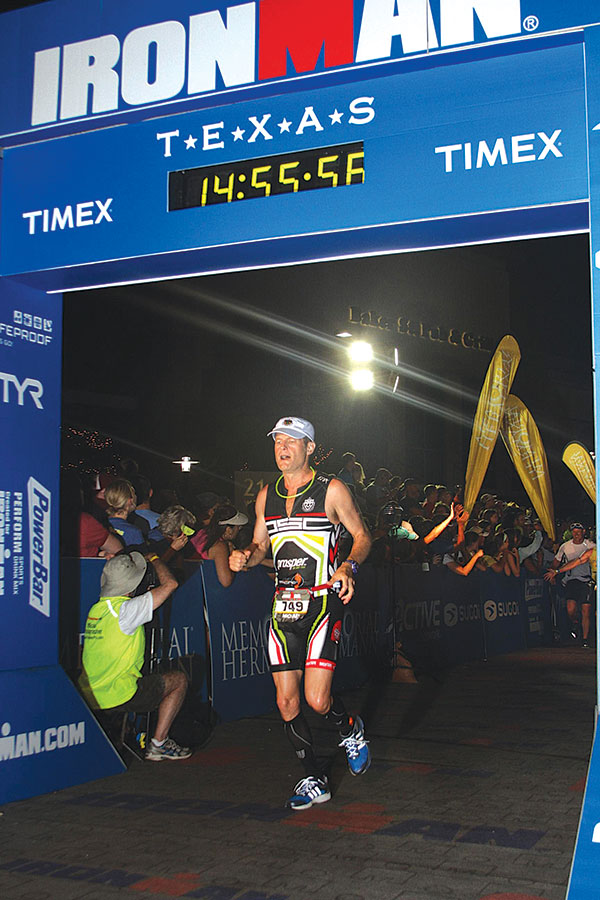 Michael Conway ’92 finished his first Iron Man triathlon in May at The Woodlands.

Michael Conway ’92 is one tough guy. Not because he works out six days a week or that he has completed the 140-mile Iron Man triathlon. And while that pinnacle of endurance racing is a feat worth noting, the 44-year-old sees beating brain cancer as his toughest accomplishment.

“For me, the repetitiveness, the endurance and the time during the training — even though I’m now perfectly well from cancer — was therapeutic and rhythmic,” said Conway, who also suffers from Tourette Syndrome (TS).

Diagnosed with medulloblastoma at age 21, Conway said his initial reaction to treatment was, “Am I going to lose my hair?”

That optimism and good humor has stuck with him in the 20-plus years of being cancer free. But compounding the stress of cancer treatments was a trigger for something else —tics brought on by TS.

On the phone, a slight stutter periodically comes through the line, but for the most part, Conway doesn’t let TS or cancer slow him down. Instead he uses it to push himself toward his next Iron Man, which he hopes will be in Kailua-Kona, Hawaii.

On the local level, Conway, who works for M.D. Anderson Cancer Center, has turned his passion for sport into a chance for kids with Tourette Syndrome to succeed through Camp du Ballon Rouge, a free summer camp for kids with TS.

“A lot of these Tourette kids have things they haven’t done in their life,” Conway said. “I know it’s a confidence builder, but the best part isn’t that it’s fun, it’s the feedback from parents about how much their child may have improved.”

The camp, which is run through Tourette Syndrome Association of Texas, is Conway’s way of giving back, and the kids in turn inspire him during his races.

“I feel like I have to finish this because I would feel like I let them down if I don’t,” said Conway, who completed his first Iron Man in May in The Woodlands. “Whether it took me 10 hours or 16 hours, I did it and they need to see that, ‘Hey, it can be done.’ ”