Offensive coordinator with the Buffalo Bills, former TCU running back is working hard, even if the NFL lockout is going strong. 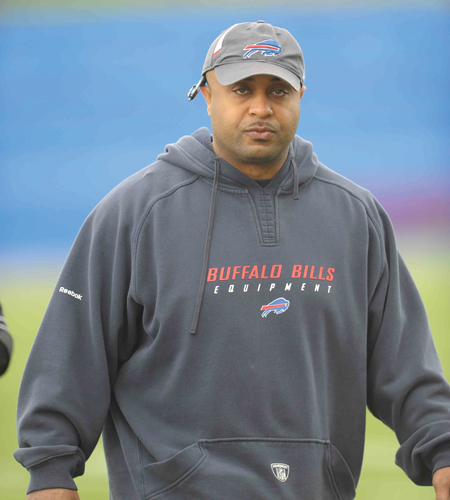 Curtis Modkins enters his second season as the offensive coordinator with the Buffalo Bills. (Photography by Buffalo Bills)

Offensive coordinator with the Buffalo Bills, former TCU running back is working hard, even if the NFL lockout is going strong.

What does an NFL offensive coordinator do during a work stoppage? He keeps game-planning. That’s what Curtis Modkins spends his days on for the Buffalo Bills while the league and players’ union work out their differences. “I’m actually more busy,” he says. “Instead of one offseason workout plan, I have five. There’s scripting, planning practice schedules. Also some self-study. Study of opponents. Study of defenses that give us problems.” It’s the kind of work ethic he learned as a Horned Frog from 1989-92 under Jim Wacker and Pat Sullivan. Modkins still ranks eighth all time in rushing yards with 2,763, plus 14 touchdowns and 440 yards receiving.

We tracked Modkins down this summer to find out what he was doing during the NFL Labor Strike.

What does an NFL offensive coordinator do during a work stoppage? I’m almost as busy – no more busy – than if there was no lockout. There are so many scenarios I have to prepare for: Do we have a full training camp but no OTAs (Organized Team Activities)? What if we do have OTAs? What if only rookies can come early? What if we have three weeks to prepare for our first game? I’m working on about five or six different contingency plans. There’s scripting, planning practice schedules. Also some self-study. Study of opponents. We have the schedule so we know who to get ready for. What new things do we want to incorporate. Study defenses that give us problems.

Normally you’d be doing what? Instead of five plans, we’d have one. Either way, we still have to get ready to teach and install the plan. It’s new territory for all of us. I’m just doing what I always do and that is to focus on what I can control.  I can be ready when they say it’s time to go.

What’s your take on the prospects for a deal getting done? I’m just focused on the job I have to do. It’s really a waste of time and energy to think about it. I just need to be ready whenever they tell us to go.

How would he assess the Bills in the second year as OC? The first year you take over an organization, it takes time to incorporate you ideals and change the culture and learn the personnel and have them learn the coaches. You have install how you practice, new terminology. I think the arrow is point up, though.

How would you describe your style as an offensive coordinator? What [head coach Chan Gailey and I] do doesn’t have a name and that might be one of the best things about it. It’s not a West Coast anything. Or a Coast of any kind. Each year is different and the players are different. I think the strength of our system is that it’s versatile to mold to our players. In Kansas City, we had a two-back system and the quarterback went down. The backup was more of a spread, West Coast guy, so we went to that. We try to be successful with multiple systems. In this league it changes week to week.

What are your coaching asperations? Like everybody else, I would like to be a head coach in this league or in college, especially if a good opportunity came along. But right now, my focus is helping Chan Gailey win a championship. That’s as far as I can go. It would be selfish to say anything otherwise.

What are your thoughts on the current success of the Horned Frogs? I’m very proud of them. I’m excited for what they’ve accomplished. I follow them as much as I can. I get every game I can. They’re doing what I knew TCU could do when I went there. I knew things could happen at that place with the location and the culture. The resources have changed, but they’ve done a great job. Every year when the schedule comes out, I check mine to see if there is an opening I can come see a game. So far there’s not been. But as you know, how your college team does is the No. 1 thing guys like to brag about. So I have a lot to say.