The tough-minded junior right-handed pitcher was among four Horned Frogs taken in the Major League Baseball Draft in June. But will he go pro or return for a senior season at TCU? One of Frogs’ aces talks about his future and the 2011 season. 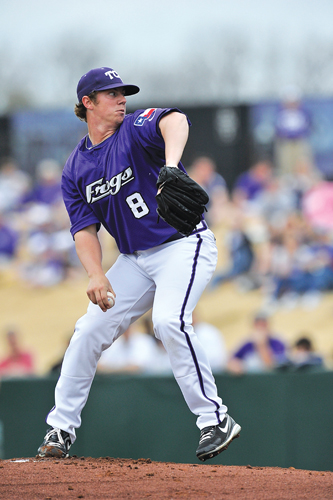 The tough-minded junior right-handed pitcher was among four Horned Frogs taken in the Major League Baseball Draft in June. But will he go pro or return for a senior season at TCU? One of Frogs’ aces talks about his future and the 2011 season.

You were drafted in the 10th round by the Arizona Diamondbacks. Where do you think you’ll be pitching come the fall? My dream has always been to play professional baseball. I passed that dream up once when I was drafted coming out of high school [in the 37th round by the Milwaukee Brewers], which was the right decision for me at the time. But it’s going to be hard to do it again. It’s a tough decision. I won’t say that I couldn’t return [to TCU], but I really want to follow my dream. Being at TCU was the best years of my life, that’s for sure. Even if I get what I want contract-wise, it will be hard to leave friends and coaches behind.

How would you assess the team’s 2011 season compared to last year’s magical run to the College World Series? Struggle. It seemed like we were fighting injuries all year this time. A year ago, we didn’t have any. But we kept playing TCU baseball, and we ended up hosting a regional.

You missed several starts in May because of arm pain and then only threw 12 pitches in the Fort Worth Regional. Describe what your arm felt like. Soreness. Tightness. When the regional started, I felt good. I felt like I could pitch five or six innings. But then [in the regional game against Oral Roberts] I felt something pop, and I came out of the game. Very disappointing.

When you got here as a freshman, TCU had never hosted. Now, it has three straight years and gotten to Omaha. The program has a lot of momentum now. What’s it like to be a player during that time? I tell guys that come here on recruiting visits, ‘You can either be a part of a tradition, or you can come here and help build a tradition.’ That’s sort of how I see my career at TCU. A lot of guys see it that way. We wanted to come to a place that hadn’t hosted, hadn’t won a regional, hadn’t gotten to Omaha, and we wanted to accomplish those things. I’m very proud of being a part of that.

Read more of the First Person interview with Kyle Winkler, and watch a video, including what Jim Schlossnagle is like as the coach, the new bats in college baseball and what it was like to play with a pitch clock at magazine.tcu.edu/webextras.