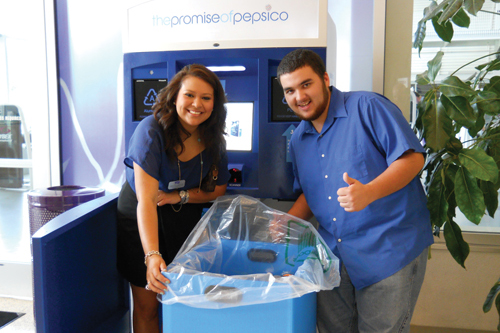 Working with Keith Whitworth, a sociology instructor who teaches classes on sustainability, they worked with the Physical Plant to have the machines installed in strategic campus locations including residence halls and the University Recreation Center.

“The machines are vending machines in reverse,” Garza says. Students scan the bar code of the bottle or can then deposit it into the machine and are rewarded points that can be used for discounts at local businesses.

Garza says the impact of recycling can really add up. Last fall semester, she filled her closet with more than 400 used bottles and cans by the end of the term. She recycled them all through the Dream Machine, earning more than 1,000 points.

The Dream Machine recycling initiative — created by PepsiCo in collaboration with Waste Management, Keep America Beautiful and Greenopolis — is introducing thousands of recycling kiosks and bins at high-traffic, public locations around the country to help increase the U.S. beverage container recycling rate. They were introduced along with the Greenopolis Recycling System, an online social community that encourages incentive-based recycling. Students can go online, set up an account and get rewards based on their recycling efforts. The rewards can be redeemed for things such as meals, movie tickets or merchandise.

Garza says the machine are already proving to be popular.

“The day we did the ribbon-cutting, the machines, which hold 500 plastic bottles or aluminum cans each, were already full.”

On the Web:
sustainability.tcu.edu
More on TCU’s green initiatives