Professor Paul Boller’s linguistic role in World War II is part of an upcoming episode of the “History Detectives.” 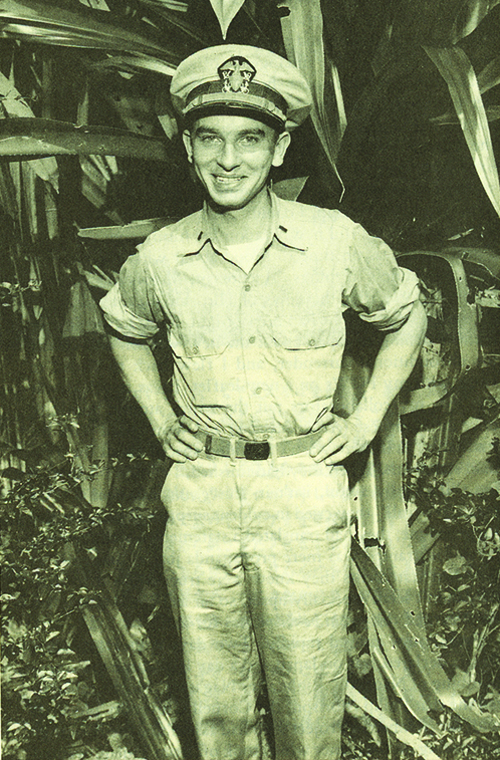 Professor Paul Boller’s linguistic role in World War II is part of an upcoming episode of the “History Detectives.”

Before firebombs rained from the sky in Japan during World War II, words of warning dropped from the heavens.

A series of U.S. air raids in the spring and summer of 1945 inflicted heavy damage on one Japanese city after another. But a U.S. Navy campaign involving a young language officer and three Japanese prisoners of war helped curb civilian casualties in Japan in the deadly final months of the war.

Paul F. Boller Jr., TCU Emeritus Professor of history, was the Guam-based Navy language officer who supervised the creation of a series of U.S. propaganda leaflets dropped over Japan in advance of B-29 air strikes. The two-sided documents called for Japanese surrender on one side, and on the other urged the evacuation of civilians in cities identified as possible bombing targets.

“The true heroes were at the front,” says the 94-year-old Boller. “They are the ones who deserve to be honored. Still, I felt like I did a little something. It did save lives. I felt some pleasure in that.”

After all this time, Boller is receiving attention for his part in history. He will appear on an upcoming episode of “History Detectives” that focuses on some recently uncovered World War II propaganda leaflets. The show aired on June 28 but will run again on Sept. 13 on most PBS stations. Or you can see it online at pbs.org/video.

Host Wes Cowan and a camera crew came to TCU in December to film an interview with Boller.

“I don’t know how much I’ll be featured on the show,” Boller says. “Maybe they’ll just get a fleeting look at me.”

In the episode, Cowan and company will delve into the origins of a collection of recently uncovered WW II propaganda leaflets. It turns out that the leaflets Cowan and his crew showed to Boller were produced at a U.S. Navy base in Honolulu.

The leaflets produced in Hawaii were quite different from the ones Boller worked on in Guam. For one thing, the Honolulu-produced leaflets depicted graphic images of death and destruction. Moreover, the Honolulu leaflets called for Japan’s surrender but offered no warnings aimed at protecting Japanese civilians from harm.

“The one I worked on had the effort to save some civilians’ lives,” Boller says. “I couldn’t find any other leaflet drops in the war — not in Europe, either — that provided for the possibility of avoiding civilian casualties.”

Boller arrived at the Commander in Chief Pacific (CINCPAC) Fleet Headquarters in early 1945 feeling dejected. He had wanted to experience the rush of being a battlefield translator. Instead, he was reporting for yet another desk job.

Boller was a history graduate student at Yale in 1942 when a recruiter persuaded him to enroll in the Navy Japanese School at the University of Colorado at Boulder. He completed the intensive yearlong course and became an ensign in the Navy Reserve. Boller was assigned as a language officer in Pearl Harbor, where it was his job to read over recovered Japanese materials to search for valuable intelligence.

He performed his duties admirably at Pearl Harbor and was picked to serve as a linguist on the front lines of Iwo Jima. Boller envisioned playing hero by prying military secrets from Japanese captives or finding and translating key Japanese battle plans. However, his superiors decided at the last minute that Boller was needed instead at CINCPAC Headquarters in Guam. His new assignment carried the seemingly glamorous title of senior translator in the language section of the Advance Intelligence Center. But it was mostly a mundane position filled with hours of combing through recovered Japanese military manuals and geography books and finding nothing of importance.

“It sounds crazy, but it was a disappointment,” says Boller, who described himself as an isolationist who had come around to the view that Nazi Germany and the Japan’s militarist regime needed to be defeated at all costs. “I knew some translators from Boulder who got to serve as translators in combat, and I was young and wanted to do it.”

Luckily for Boller, his direct superior in Guam, Lt. Frank Huggins, allowed him to slip away from the office on slow work days and trudge several miles to the Japanese prisoner stockade. Boller’s visits with the prisoners were not just opportunities to gather intelligence but a chance to practice his conversational Japanese.

An early attempt to chat with a Japanese officer went poorly. Boller greeted the prisoner in Japanese, but the man refused to converse with an American officer in his native tongue. “Speak English,” the officer scolded in a heavy accent. He then proceeded to berate Boller in Japanese.

Other prisoners proved more cooperative. Boller soon made the acquaintance of a number of Japanese POWs, including Maj. Yanagi, a physicist from Tokyo who desperately wanted the war to end so he could return home to his wife and three teenaged daughters.

Boller’s contacts in the stockade proved vital. In April 1945, Lt. Cmdr. Robert Morris, a specialist in psychological warfare, asked Boller to round up some prisoners who might be willing to help on a propaganda leaflet campaign. Morris needed the POWs to translate the propaganda messages from English into Japanese.

“I could have probably translated them myself, but they wouldn’t have been authentic,” Boller says. “They just wouldn’t have.”
Boller was placed in charge of supervising Yanagi and two other acquaintances from the stockade to make certain they transcribed the messages correctly and did not try any funny business. The POWs assured Boller they would work hard and follow instructions. Indeed, two of the prisoners worked diligently each week translating the words.

The other prisoner, an artistic young man, concentrated on writing out the completed messages in beautiful brush-stroke characters.

“They were convinced Japan could not win,” says Boller, who worked alongside the POWs inside a Quonset hut decked out like an office. “And if these leaflets got the war through sooner, that was OK with them.”

Every weekend, Boller called a friend in the Air Force who had the scoop on where the next week’s raids were likely to happen. Instead of identifying the exact locations, the leaflets would list eight or 10 cities that were possible targets. B-29 pilots then dropped the leaflets over potential target cities during routine runs to survey weather conditions.

The leaflet campaign continued through July. But something changed the first week of August. Boller’s Air Force contact suddenly had no info to pass along. “They must be up to something special,” Boller’s contact said.

A few days after that unusual phone conversation, Boller traveled to the island of Saipan, which along with Guam was part of the Marianas — a strategically important island chain within easy bombing range of Japan. He was there to help coax a Japanese officer hiding out in a cave to surrender peacefully. But Boller learned shortly after arrival that an atomic bomb had been dropped on Hiroshima.

“When I heard about the atom bomb, I was filled with depression,” Boller says. “War is bad enough. Now we have this?”

Boller quickly boarded a plane back to Guam. Once there, he and the POWs assembled in the Quonset hut to craft a dire message imploring the Japanese to surrender or risk another atomic bomb attack. The prisoners went diligently, but calmly, about their task of creating a leaflet warning their fellow Japanese citizens about a weapon they called “genshi bakudan.”

Conversing in Japanese with the prisoners, Boller professed his uneasiness over this new era of nuclear warfare the world had just entered.

“This genshi bakudan is some bad stuff,” Boller says, recalling the conversation. “They said, ‘You mean it’s real?’ I find it so interesting that they prepared the leaflets even though they didn’t believe the weapon existed.”

It indeed existed. Three days after the Hiroshima bombing, genshi bakudan was unleashed again — this time over Nagasaki. Emperor Hirohito knew it was time to give up the fight. Japan formally surrendered Aug. 15, 1945.

The war was over, but Boller still had work to do. He was first sent to the Mariana island of Rota, 40 miles north of Guam, where 3,000 Japanese soldiers remained. In Rota, he served as interpreter for a ceremony in which surrendering Japanese officers would be asked to hand their samurai swords over to a battalion of Marines. Boller opened the proceedings by declaring in Japanese, “In the name of the United States, we take possession of this island.”

“It was one of those moments when I thought to myself, ‘Did I really just say that?’” Boller says.

After Rota, Boller spent six months in Japan as part of the U.S. occupation. He worked in Tokyo for the United States Strategic Bombing Survey, translating documents that revealed the effects of the U.S. firebombing campaign on the Japanese war effort. Boller also interrogated police, municipal government officials and members of the former War Ministry. The first time he learned of the direct effects of the leaflet campaign was during an interview with the mayor of Hachioji, a Tokyo suburb.

The mayor told him that B-29s dropped hundreds of leaflets one week, warning of possible raids to come. The mayor gave residents permission to evacuate if they wanted to, and most did. A few days later, the town was leveled by firebombs. Of those who read the leaflets but chose to stay, 360 were killed.

While in Tokyo, Boller visited the home of his physicist friend. Yanagi was still presumably in U.S. custody, but Boller had a chance to speak to the prisoner’s wife. He told her he had seen her husband recently: “He is in good health. And he will be coming home soon.”

As far as Boller knows, Yanagi and the two other POWs he collaborated with did return home safely. As for Boller, he returned home to serve a brief stint as a translator for U.S. Naval Intelligence in Washington, D.C. before resuming his academic career in 1946.

He wrote about his time in the Navy in a 1992 book, Memoirs of an Obscure Professor and Other Essays (available at the TCU library). But it was not until recently that Boller began to wonder just how much of an impact the leaflets he worked on had on sparing civilians’ lives.

“If I was younger, I would go back to Japan and research it,” Boller says. “I can’t think of another time when this was done.”

He can at least rest easy knowing that, in the heat of battle, he and his superior officers — and some willing volunteers from the opposing forces — never lost sight of the value of innocent lives.

“I hate war so much,” Boller says. “At least I was able to do something decent.”