Rocks at the bottom of the world 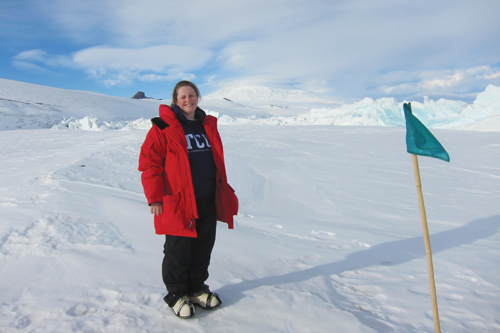 Assistant professor of geology Rhiannon Mayne collected more than 1,000 meteorites on Antarctica from November 2010 to January 2011.

Rocks at the bottom of the world

Each year, a select group of scientists stock up on pasta, pack up their parkas and get up-to-date on their dental work. Then they head to Antarctica and spend six weeks collecting more than a thousand meteorites.

“The two biggest places we get meteorites from nowadays are the desert in North Africa and in Antarctica because they’re relatively easy to find. In Antarctica you get a real concentration of them — we found 1,200 in the six weeks we were there.”

It wasn’t until 1969, when Japanese glaciologists discovered nine meteorites in a relatively small area of Antarctica, that scientist began to see the frozen terrain as a rich treasure trove. The United States teams started collecting specimens in 1976, working out of the McMurdo Station, a U.S. research center operated by the National Science Foundation.

Mayne, a native of Northhamptonshire, U.K., who did her undergraduate work at the University of Edinburgh, heard about the program when she was a graduate student at the University of Tennessee. Attending a presentation at the annual Lunar and Planetary Science Conference, she was intrigued when Ralph Harvey, the Case Western Reserve University professor who heads the effort, called his team, “the dogcatchers of the meteorite world.”

“That’s because the team has no priority for the meteorites they collect,” she says. “They all go to the U.S. National Meteorite collection.”

After earning her doctorate, Mayne went to work for the Smithsonian’s National Museum of History, where part of her job was classifying the meteorites collected in Antarctica.

“I felt like I’d seen all angles of this process, apart from collecting,” she said. “I’d classified them and used them in my research — now I really wanted to collect them.”

Mayne joined the TCU faculty in the fall of 2009 and continued to work on getting to Antarctica. She got the go-ahead for the 2011 trip and began intense preparations that included a battery of medical tests checking for potential issues such as high cholesterol and impacted wisdom teeth.

“Most people who go to Antarctica have their wisdom teeth out because that’s not something they would want to take you out of the field for,” she says. “I’d had mine out in preparation for the trip so it wasn’t a problem.”

She also had to go grocery shopping. Because Mayne has a gluten allergy, she had to mail three boxes filled with gluten-free mac and cheese and pasta in September, to arrive in time for the January expedition.

In November, the team flew to Christchurch, New Zealand, where they gathered more supplies before making the 2,500-mile flight to McMurdo Station, Antarctica’s largest “city,” with a seasonal population of more than 1,000 researchers and support staff. There they attended “survivor school” and learned the basic of operating a Ski-Doo snowmobile.

Mayne said she quickly adjusted to the temps, which reached a balmy 40-degrees Fahrenheit in January, and her new routine, but also felt like she’d been transported to an alternative universe.

“Being in Antarctica is like you’re completely detached from the reality you normally live in,” Mayne said. “It’s its own little town. It’s a very weird experience, it’s very hard to describe.”

One of the hardest adjustments was having sunlight 24 hours a day.

“You’d go into buildings where there was a coffee shop or wine bar, and you’d go in and have a nice cup of coffee or glass of wine before you go to bed. You’d emerge at 11 p.m. or even midnight, and it’d still be as bright as when you emerged from this dark building,” she said.

“You felt like you’d been there all night, and it was the next morning.”

After a week or so, the team prepared to move into the field, where they split up into two groups and began searching for meteorites. Mayne said life in the field brought new challenges, including having to chip off blocks of ice to melt whenever she wanted to drink, cook or bathe.

She and her roommate Inge Loes ten Kate of the NASA Goddard Space Flight Center lit a fire to keep the tent warm in temperatures that dipped to minus-40 degrees Fahrenheit. Some people wore a sleeping mask to shut out the constant sun.

“I was amazed at how comfortable it was,” Mayne said. “You say you’re camping in Antarctica and everyone thinks that you’re crazy, but overall it’s pretty comfortable. It’s not bad — other than the toilet facilities.”

“I really appreciated the sound of a flushing toilet when I got back home,” she added.

Mayne spent her days searching for blue ice, or icy areas known to be rich in meteorites.

As meteorites fall from space, they are incorporated into growing piles of snow and ice, but over time the ice sags under its own weight. On the shore, it can break into icebergs that can sink to a watery grave, but inland the ice hits mountain ranges where it’s exposed to dry winds.

As the ice evaporates, the meteorites rise to the surface and begin to pile up.

“You’re looking at all the meteorites coming out of that ice sheet and you also get this blue ice, which is key because it’s very difficult to find meteorites in an area where it’s going to snow, you just want to be looking on ice,” Mayne said.

“In some areas there are terrestrial rocks as well, so you’ve got to be able to pick out the meteorites,” Mayne said. “In other areas, there are just meteorites.”

The largest meteorite the team found was not quite football size. The smallest was the size of a pea.

While she loved the thrill of finding meteorites, she had to get used to the close confines of the camp, where she spent six weeks in the company of seven other people.

“They are the only people you see and we were there for Christmas on the ice, we were there for New Year’s on the ice,” she said, noting the only other contact was when supplies arrived. “Towards the end, a re-supply came in and brought a large group of people from a bigger camp — 10 or so people — and that was the most people we’d seen for five or so weeks. Which is weird. I thought, ‘Oh wow, people. I can interact with somebody new!’ You get used to that little insular life pretty quickly.”

Mayne said when she left Antarctica and landed in New Zealand, she realized it had been eight weeks since she had heard the sounds of birds or smelled flowers.

“After being in Antarctica, the rest of the world was a bit overwhelming,” she added.

Now back on campus, she’s looking forward to incorporating her Antarctic work into her class lectures. This fall, she’s teaching an introductory geology class and “Evolution and Exploration of the Solar System.”

Sidebars:
Excerpts from the diary of Rhiannon Mayne
Gallery of photos from Antarctica

On the Web:
More info on ANSMET and diaries from the expedition