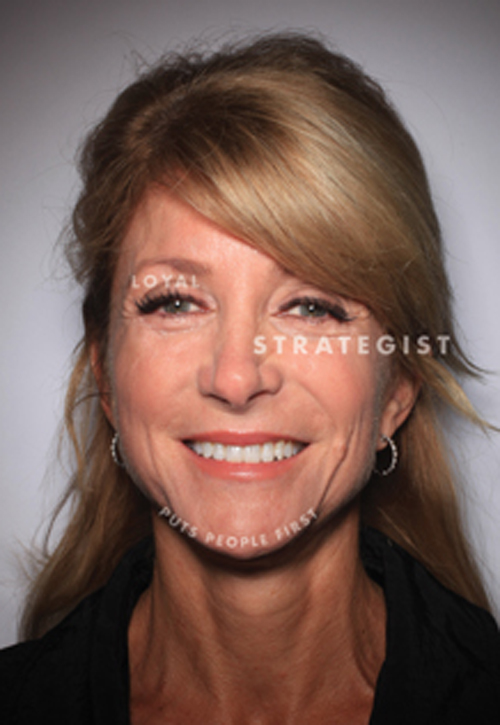 Her Bambi eyelids may make her feel like someone tattooed on her forehead, “Please tell me all your personal problems,” because others open up and respond to those big eyelids. This same trait allows her to cut to the bottom line.

She can reduce conversations to the essentials. Her eyelids also say she is very loyal in relationships and expects the same in return. Her gift is her ability to develop a network of loyal, lasting relationships.

Her winged eyebrows show she is best on the planning committee, seeing all the big ideas and possibilities. Her high eyebrows and low ears indicate she is a natural strategist. She is good at developing the long-range plan or goal. With her low ears, she can’t be stampeded into a decision and prefers wisdom over speed — with some perfectionist tendencies. She listens carefully and wants to make sure that she gets it right.

The fact that her septum hangs lower than her nostrils means her career path is best fulfilled by working in service of others.

She has a round chin, which says that when she acts on her ideas, she puts people first. The fact that she has a large chin means that she can take it on the chin.

The line running down her cheeks and under her chin is a “gift of gab” line. She can talk the birds out of the trees if she is so inclined.

Finally, the wide space between her eyebrows is the mark of innate self will. She is not a flip-flopper. If she decides that she is going to do or not do something, it will be very difficult to get her to change her mind without giving her solid proof that she was wrong.