Parents of two TCU students and benefactors of several Horned Frog programs, the Rees-Joneses are this year’s honorees for the Honorary Alumni Award. 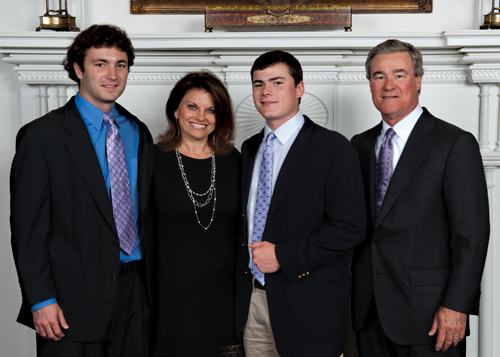 Parents of two TCU students and benefactors of several Horned Frog programs, the Rees-Joneses are this year’s honorees for the Honorary Alumni Award.

Jan and Trevor D. Rees-Jones are known at TCU for their generosity.

They have shared their time, expertise and financial support with the university. Most important, they have given TCU two Horned Frogs: senior Trevor R. Rees-Jones and freshman David Rees-Jones.

Jan Rees-Jones is an active member of Highland Park Presbyterian Church, having held several board positions in the women’s ministry.  She serves on the Advisory Council of the George W. Bush Women’s Initiative and the board of the John Goodwin Tower Center for Political Studies.  She is an animal lover with a passion for animal welfare issues and is also a flying enthusiast.

Trevor Rees-Jones serves on the TCU’s Board of Trustees and the TCU Energy Institute’s Board of Advisors.  An independent in oil and gas exploration and production, Rees-Jones has founded several companies, including Chief Oil & Gas LLC, which was an early operator in the Barnett Shale play in North Texas. Chief continues as a private independent oil and gas company, with activity throughout the United States.  Jan and Trevor Rees-Jones, who have been married for 23 years, are lifelong residents of the Dallas area. Jan Rees-Jones is a graduate of Texas Tech University.  Trevor Rees-Jones is a graduate of Dartmouth College, where he serves on the board of trustees, and the SMU Law School.

The Rees-Joneses are the founders of The Rees-Jones Foundation, a private foundation established in 2006 to help improve in tangible ways the quality of life and life circumstances of the people it serves, with special emphasis on assisting underserved children and their families.  Of special interest are programs designed to serve children who through no fault of their own find themselves in difficult circumstances, which may include abuse or neglect or simply inadequate resources or opportunities to address their individual needs.  TCU’s Institute of Child Development has benefited from the foundation’s support.