Supporting TCU from facilities to academics to athletics, the couple is the winner of the Royal Purple Award. 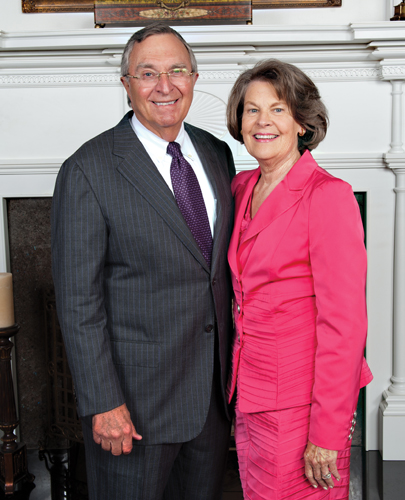 Supporting TCU from facilities to academics to athletics, the couple is the winner of the Royal Purple Award.

The Royal Purple Award recognizes extraordinary service to and support of TCU and the greater community. Few could match the record of J. Luther and Teresa Carter King.

A graduate of the University of North Texas, Teresa King is known for her outstanding support of the arts on the TCU campus and beyond. Her involvement includes serving on the Executive Board of the Fort Worth Symphony Orchestra, the Van Cliburn Board and the Princeton University Department of Art and Archaeology Advisory Council. At TCU, she serves on the Fine Arts Gala Committee and the College of Fine Arts International Board of Visitors.

She also has held positions of significant responsibility at Highland Park Presbyterian Church, The Dallas Woman’s Club, the Dallas Garden Club and the San Saba/Llano Regional Council of the Lower Colorado River Authority.

Luther King earned two degrees from TCU: a BSC in 1962 and an MBA in 1966. He is concluding a six-year term as chairman of the TCU’s Board of Trustees. He is a member of the advisory board for the university’s Luther King Capital Management Center for Financial Studies and a member of the Neeley School of Business International Board of Visitors. In 1992, he was named TCU’s Distinguished Alumnus.

Luther King is president and founder of Luther King Capital Management Corporation, one of the largest independent employee-owned investment advisory firms in the Dallas-Fort Worth area. He is the former vice chairman of the University of Texas Investment Management Company and is a member of the Investment Advisory Committee to the Trustees of the Texas Employees Retirement System Board, where he served as chairman. He has served and, in some cases continues to serve, as chairman of the audit and compensation committees for four publicly held companies, three of which were held on the New York Stock Exchange. In addition, he has served on the boards of numerous privately held companies and philanthropic organizations.

Founders of the Addison & Randolph Clark Society and the TCU Frog Club, the couple’s support of TCU ranges from facilities to academics to athletics.

The Kings live in Dallas. They have two married sons, both graduates of the TCU Ranch Management Program: Bryan ’94, and Mason ’99.