An certain future NFL Hall of Famer, Tomlinson ’05 is the recipient of the Frog O’Fame Award. 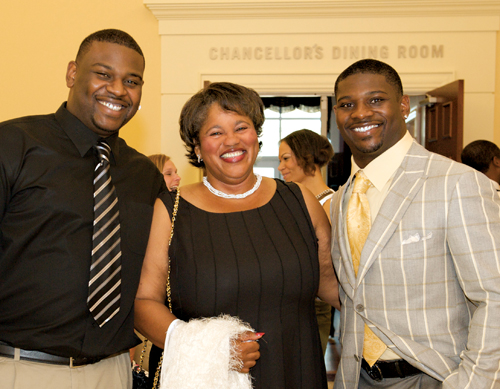 An certain future NFL Hall of Famer, Tomlinson ’05 is the recipient of the Frog O’Fame Award.

LaDainian Tomlinson ’05 indisputably has earned a place in the pantheon of Horned Frog football heroes. He twice led the NCAA in yardage, won the Doak Walker Award for the nation’s best running back and was a finalist for the Heisman Trophy. Tomlinson completed his college career with 5,263 rushing yards, ranking sixth in NCAA Division I history.  Among his many other achievements, he was recognized with the Jim Brown Trophy and was named the Most Valuable Player in the Mobile Alabama Bowl in 2000 and the Senior Bowl in 2001.

In 2005, TCU retired his jersey, and he earned his bachelor’s degree.

Tomlinson was picked fifth overall in the 2001 draft by the San Diego Chargers and became the team’s starting running back. He achieved immediate success in the NFL, rushing for more than 1,200 yards and making more than 50 receptions in each of his seven seasons. In 2003, he became the first player in NFL history to rush for 1,000 yards and record 100 receptions in the same season.  He reached his 50th career touchdown in his 4th season and was elected to the Pro Bowl team in 2002, 2004, 2005 and 2006.

In 2010 after nine seasons with the Chargers, Tomlinson ended one of the most successful one-team tenures in professional sports history, becoming a free agent and signing with the New York Jets.

He holds a number of records:

Yet Tomlinson considers his work off the field his greatest success, particularly his work with children. His charitable initiatives include the Tomlinson’s Touching Lives Foundation that helps families in need, Camp LT for kids, and the LT Celebrity Golf Tournament.

Tomlinson and his wife, Torsha, live in Bernardsville, N.J., with their son, Daylen.