Diana Vela ’05 (PhD) focused her thesis on historical writings by women in the Southwest — and ended up in history herself.

Diana Vela ’05 (PhD) focused her thesis on historical writings by women in the Southwest — and ended up in history herself.

When Diana Vela ’05 (PhD) was doing research work for her thesis, she expected to earn a doctoral degree in English. She just never expected to see her research end up on a New Mexico historical marker. 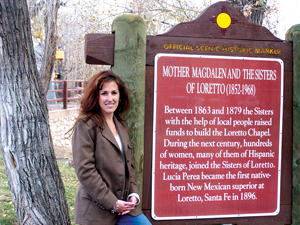 Vela focused her thesis on historical writings by women in the Southwest. “When I began looking for a dissertation topic, there was not a whole lot out there on female writers and so much of what was there was from the Northeast — Phyllis Wheatley, Abigail Adams.”

So she began thinking about who the Southwest settlers were, and who among those was literate, and she hit upon the idea of nuns. They were educated, they were pioneers, and little — if any — attention had been paid to their writings.

Her dissertation looked at three groups of nuns, including the Sisters of Loretto in Santa Fe, N.M. The writings that Vela focused on were Sister Magdalen’s letters home to family, which the nun had copied over into her Spanish practice book as an exercise in learning that language.

Vela’s father was vacationing in Santa Fe about two years ago, when he saw a story about a new state program to put up roadside markers honoring key women in the state’s history. He told his daughter, who filled out an application nominating the nuns and provided the necessary historical documentation.

On Dec. 1, a marker honoring “Mother Magdalen and Sisters of Loretto (1852-1968)” was dedicated, the first of 54 such roadside markers to be established. Vela persuaded actresses Ali MacGraw and Barbara Bossun to read some of the letters at the dedication, which was attended by New Mexico Gov. Bill Richardson and other dignitaries. The 5-foot “Official Scenic Historic Marker” preserves a bit of history, as seen from the oft-overlooked female perspective.