Tall in the saddle

Terry Stuart Forst ’92, ranch manager at the 40,000-plus-acre 7S Stuart Ranch, is inducted into the National Cowgirl Museum and Hall of Fame.

Tall in the saddle

Terry Stuart Forst ’92, ranch manager at the 40,000-plus-acre 7S Stuart Ranch, is inducted into the National Cowgirl Museum and Hall of Fame.

When Terry Stuart Forst ’92 (RM) learned she was a 2007 inductee into the National Cowgirl Museum and Hall of Fame, she was “shocked.” 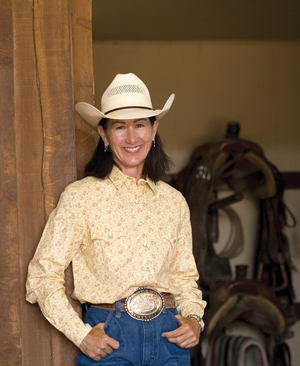 But the November induction was an experience she treasures. “To meet all those ladies, I was like a fish out of water. I was so impressed.”

Forst is ranch manager at the 40,000-plus-acre RT Stuart Ranch LLC, also known as the 7S Stuart Ranch. Headquartered in Waurika, Okla., it’s the state’s oldest ranch under continuous family ownership. Forst’s dad handed her the reins in 1993, a year after she graduated from TCU’s Ranch Management program.

Although Forst grew up in the ranch business, life took her in a different direction. “I had quit the ranch and was doing some other things, and I needed some confidence, something to get me back on the right track,” she recalled.

Homesteaded in 1868 by Forst’s great-great-grandfather, the ranch is laid out across parts of the historic Chisholm Trail, including what experts have described as “some of the best preserved ruts” on the trail.

Under Forst’s able hands, the ranch has earned a reputation as one of the most profitable in the Southwest and as a premier producer of Herefords and Black Baldies as well as all-around cowhorses. It has produced numerous world champion Quarter Horses as well as 1995 Superhorse “Genuine Redbud” and 2004 Superhorse “Real Gun.”