In a new book titled From the Garden Club, English associate professor Charlotte Hogg studied the writing communities of older women in the small town of Paxton, Neb., and  found a trove of unsung women writers and rekindled her own family ties. Here, she offers advice for others interested in discovering and documenting the lives of their loved ones.

In a new book titled From the Garden Club, English associate professor Charlotte Hogg studied the writing communities of older women in the small town of Paxton, Neb., and  found a trove of unsung women writers and rekindled her own family ties. Here, she offers advice for others interested in discovering and documenting the lives of their loved ones.

I had prepared a set of questions, but I tried really hard to let (my interview subjects) run things.

When I first went to the women, I thought I wanted to talk to them about their early days, because a lot of them had gone to country schools. But a lot of them couldn’t remember those days and that wasn’t where their interest was. They would much rather talk about the work they were really into. I now advise people (who want to learn family history) to go in with a few questions, but think of them as general questions and let the conversation drift where it might drift.

Sometimes what we think are the main stories are really not the most important things. It’s when they go off on a tangent that we get the stories that have a lot of concrete details and memories. Instead of the basic statistical facts like here’s when or what I studied and here’s when I graduated, get the stories behind that. 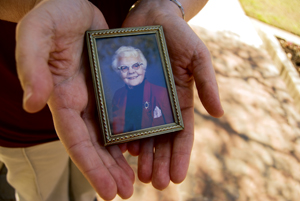 I’ve heard of people who will just send a video recorder or a tape recorder to their relative and say “record your story,” but to me one of the best parts of it was the chance to have this interaction with a family member. My grandmother would start to tell me something about a relative and I’d say, “I didn’t know she’d been married before.” It became this give-and-take conversation.

I think it can feel a little selfish to say, “I want your memories so I can have a family history.” It doesn’t feel as personal. A lot of the women I talked to were in nursing homes or were homebound. I think it was the act of having the conversation that was more significant to them. It was seeing my reaction and seeing my genuine interest — that’s what sparked them to keep going with the memories.

Make sure you have permission to be looking at stuff. My grandma had been a historian for organizations and her church so she had a lot of notebooks. I said, “Can I come over and go through this?” We went through everything and sorted things into manila envelopes – here are newspaper clippings about my dad, here are clippings about me. That was also very generative because it would bring up stories she remembered.

She had a box of valentines. I said, “Can I look at these?” They were high school valentines, very benign, from 1927. I found wonderful stuff like letters my granddad had written to her.

People shouldn’t assume only some stuff really matters. There might have been people who opened her drawer and thought it was only junk because it was things that didn’t feel official, but there was a lot of information in the informal things, particularly for women because the work they did was deemed side work – it’s just club minutes. But there was important information there. In the garden club minutes, these women really worked to know their stuff. They did a lot of research. If I hadn’t seen those notes, I would have had the assumption they just sat around and chatted and gossiped and it wasn’t very substantial, but they worked very hard in this club. I wouldn’t have known that had I not read through the minutes.

Being open to the kind of materials you assess and go through it with the person. If I’d asked my grandmother to go through all this and find the good stuff, that wouldn’t have been very satisfying for her or for me.

I was always amazed at how much people wanted to talk. I wasn’t asking pointed questions. I was asking about their reading and writing lives, not “who broke your heart.”

I’d recommend if there is a friend of your relative you want to interview, send an e-mail or letter about why you want to have a conversation so people don’t think something suspicious is going on.  You never know who is going to try to swindle you or steal your identity. Write a letter saying ‘my mom knew you and I’d really like to collect stories about her and her life. I’d like to visit with you over the phone or the next time I’m in town.’ You can suggest meeting at a local restaurant just so there’s not a stranger coming in their home.

I always felt like no matter what, you have to ask permission to go there. That’s another assumption people make about older people —  “you’ve got these stories and I’d like to take them.” That’s not the case. They’re a lot busier than we think they are and they might want to pick and choose who they share their stories with.

I always knew my grandmother wrote things up, but I never thought of her as a writer. But I learned to be really open about what was going to count. Once I started researching the women in this book, it seemed like everything was a kind of research. Look for what matters in their house, get a sense of what they’re trying to help us learn. Maybe it’s a box of recipes. For my grandmother, gardening was important to her and cooking was important to her and I just failed miserably at both of these. When I was younger, she tried to teach me how to make her cinnamon rolls and I just didn’t have the interest or ability to care. Now, of course, I wish I’d paid more attention.

For some people, their grandmas are going to be much younger than my grandmother was. She died at age 93. People may be online a lot or have a myspace account or have even created a family blog. And now there are a lot easier ways to share pictures – someone could compile a digital visual family history. I can imagine this is only going to continue to change.