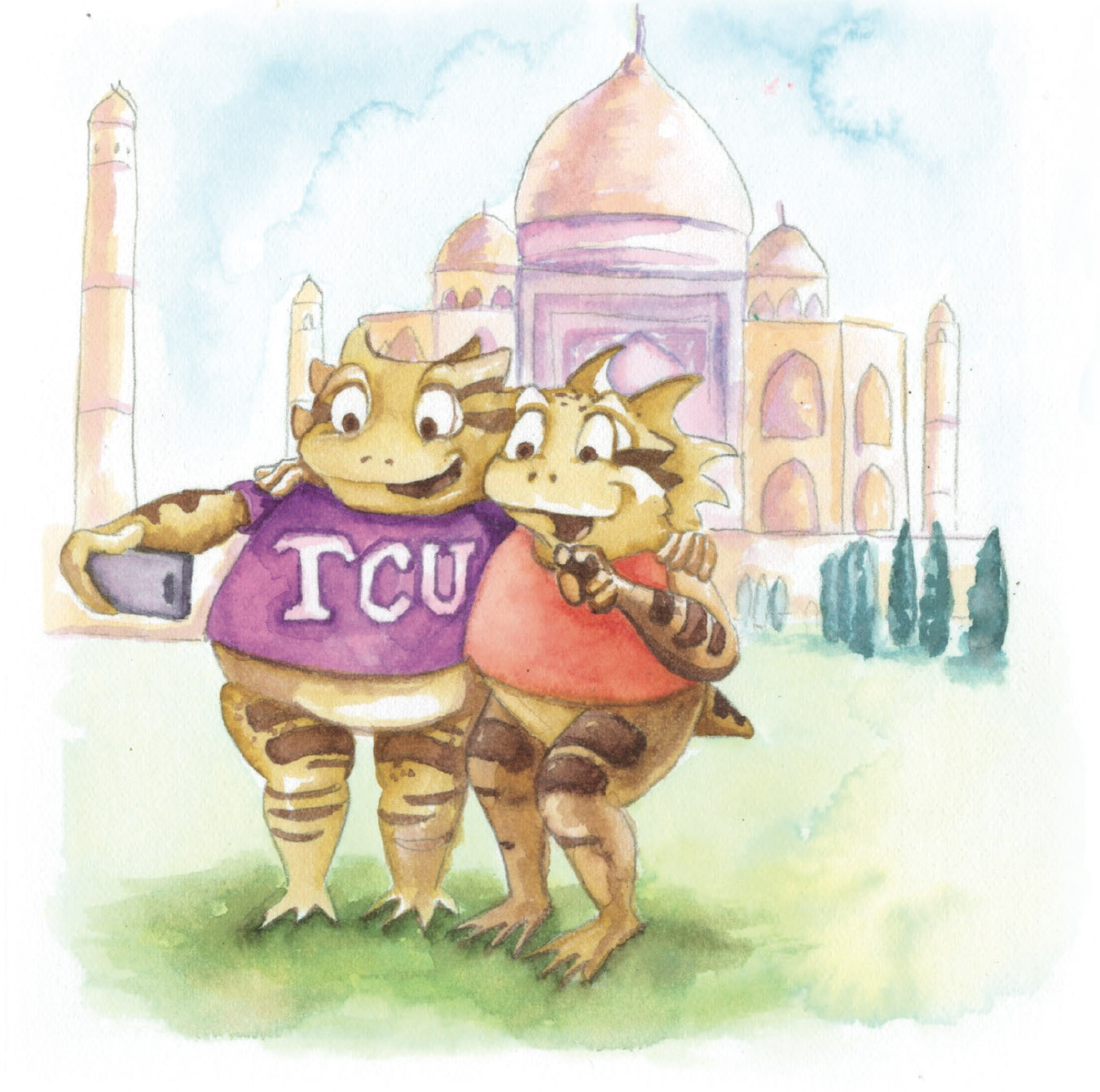 I was on a business trip in Tokyo, Japan, in November 2012 and met up with a TCU Supply Chain classmate, Nick Rew ’11, and his other half, Lauren Power ’10 (now married!), in the famous original Tsukiji Fish Market.
— Rowena Beasley ’11 Met alumna Molly Wilkinson ’09 through her virtual baking classes from France! A savior during all the lockdowns!
— Naomi Ekas, assistant professor of psychology

In Beijing at the Waldorf Astoria.
— Amanda Walker Taliercio ’98

Met Lee Winters ’98 sailing around the world. We were in Tonga at the time.
— Dana Lee Szucs Hayden ’03

Marissa and I were actually just talking about that! Chiang Mai and Bali! Too crazy.
— David Mishler ’07

We met some fellow Frogs in Florence several years ago!
— Carol Madeley Wilkerson ’82 I met a fellow Frog in London who got me an interview with a member of the House of Lords.
— Collin Yoxall ’13 (MS ’20)

We met Amanda Stallings ’97 (MLA ’01) a few years ago at Walt Disney World on the Monday before Thanksgiving at Hollywood Studios! My spouse, Michael ’00 (MM ’03, MDiv ’09), was in a TCU hat and shirt, and she had a TCU hat on and asked us if we went there and then pulled out alumni stickers from her bag to give us!
— Cassie Sexton-Riggs ’13 MDiv

At the dry cleaner’s in Zionsville, Indiana!
— Nancy Keller, mother of Grant ’19

Shoutout to the family I met at Canyonlands National Park this summer. I don’t have their names, but it was great to meet some TCU alumni! 🙂
— Merritt Coleman, environmental science senior

My sister Carol Lennox ’75 broke both her ankles but she was in excellent hands at Baylor Scott & White in south Austin, Texas, since her head nurse is Harris College of Nursing & Health Sciences alumna Michelle Phillips-Kinser ’10!
— Elaine Cole ’12 MLA

Joan ’69 and I went to Iceland. In Djupivogur, Iceland, before we all returned to the ship, we were hailed down by Austin Merkel ’21. He was a manager on the TCU football team and is going to the University of Texas for graduate school. He was always wearing TCU gear when we saw him.
— Roy Snodgrass ’69 We met this young man on the Victoria Falls bridge between Zambia and Zimbabwe. When we told him we were from Fort Worth, he busted out a loud “Go Frogs!” complete with the hand sign. Turns out he had recently met and guided some Frog fans. He was a truly good guy too.
— Ben Leonard and Stacy Emerson Leonard ’92

Went to Colorado in 2015. … An alum sold me my binoculars. I ran into another at a rest stop who ran up to me and gave me a hug. I met two more married alumni at a restaurant in the middle of nowhere. We are everywhere! Go Frogs!
— Sharra Blair-Kucera ’16 (MS ’21)

Editor’s Note: Answers have been edited for clarity and length.

When did you first know you wanted to be a Horned Frog? What was the biggest historical event to happen during your college years? People who knew the head basketball coach best reflect on the tough workouts and memorable moments.