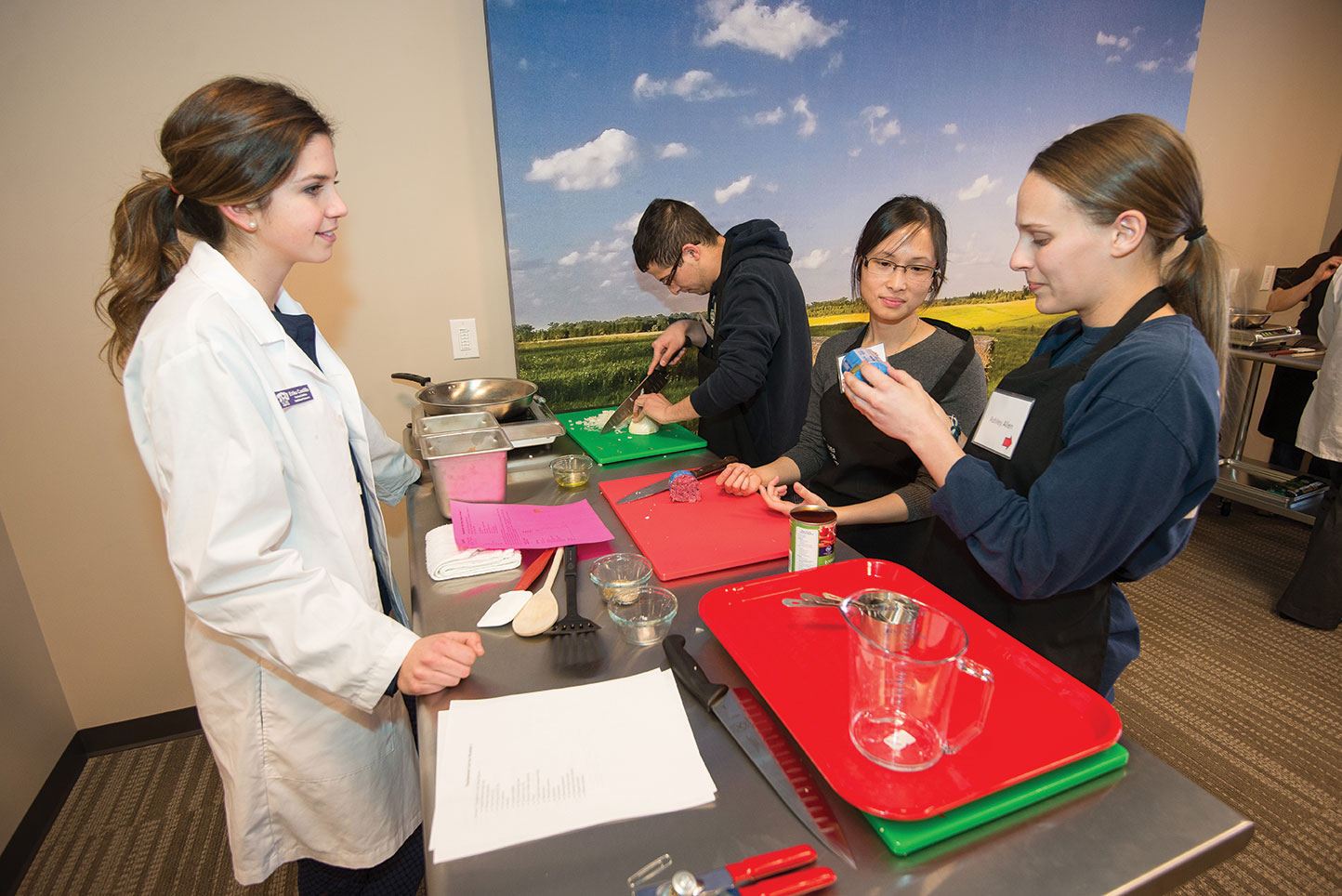 Students from TCU’s nutritional sciences program work with students from the Texas College of Osteopathic Medicine to prepare healthy fare as part of the Culinary Medicine class held at the Moncrief Cancer Center. (Photography by Glen E. Ellman)

Studies show there’s truth to the old saying an apple a day keeps the doctor away.

In fact, few would argue that eating a balanced diet that includes lean proteins, fresh vegetables and fruits – including apples – is an important step to improving overall health and lowering the risk of heart disease, diabetes and other chronic medical conditions that plague many Americans.

This spring, TCU Coordinated Program in Dietetics senior students are teaching medical students the benefits of healthier fare and ways to make it more palatable to patients.

The class, called Culinary Medicine, is a joint effort between the Tulane University Goldring Center for Culinary Medicine, the TCU Department of Nutritional Sciences/College of Science and Engineering, Texas College of Osteopathic Medicine (TCOM) at the University of North Texas Health Science Center, UT Southwestern Medical Center and the Moncrief Cancer Center.

“It’s not just about preparing a good meal,” says Dr. Keith Argenbright, director of the Moncrief Cancer Center.  “It’s about using science to create the recipes and lessons that these physicians can then translate to patients and their practice. It’s an extremely important and innovative concept.”

Dr. Anne VanBeber, professor in the TCU Department of Nutritional Sciences, says research shows the more doctors know about nutrition, the more they can help patients.

“Many of the students we’re teaching here from the TCOM go into rural medicine,” she says. “They may be the only health professional in an area of several miles. If they have a little bit better knowledge of buying food and cooking it and if they practice what they learn here, they can be better role models and their patients are more apt to make behavior changes.”

The idea of culinary medicine was developed a few years ago in New Orleans at the Tulane University School of Medicine by Timothy Harlan, M.D, a chef turned internist and Leah Sarris, a Johnson and Wales-trained chef.  The Goldring Center for Culinary Medicine debuted in 2012, and culinary nutrition information was incorporated into the curriculum to better address health issues, such as obesity, cancer, diabetes, heart disease and high blood pressure through better eating habits.

Argenbright, a 1984 graduate of Tulane’s medical school, wanted to bring the concept to Fort Worth and teaming up with TCU seemed like a natural fit.  Last spring, he and VanBeber along with Stacy Shappley ’00, an oncology dietitian at the Moncrief Cancer Center, made a road trip to New Orleans to observe Tulane’s program. Argenbright says they were struck by the hands-on approach of the class and how it was placed at the beginning of the medical school curriculum.

When they returned to Fort Worth, he met with Dr. Phil Hartman, dean of the TCU College of Science & Engineering, and Dr. Mike Williams, president of the University of North Texas Health Science Center, to begin devising a plan for initiating this program in Fort Worth. But Argenbright credits VanBeber with really getting things cooking.  “She pulled this together in a short period of time,” he adds. “She took the ball and ran with it.”

After returning from Tulane, Dr. VanBeber collaborated with TCU colleague, Dr. Lyn Dart to build on the Tulane program by developing a working model that enhanced interprofessional education competencies and included senior dietetics students to help lead the class.

“We get to actually work with the medical students and show them how it’s done in the kitchen and how nutrition can really impact your life,” says Jenn Heald, a senior TCU Coordinated Program in Dietetics major.

Shappley says it’s a win-win for everyone involved.  “I think these TCU students are really getting a great opportunity to facilitate the relationship between a nutrition student and a medical student, so there’s more collaboration,” she says. “In the long term, the one who’s going to get the best benefit is the patient.”

Mathew Pombo, a TCOM medical student in the class, says he’s enjoyed getting to work with the nutritional sciences students. “They certainly know and understand the nutritional component, and we can bring the medicine,” he says. “Bring those two together and we can do some good things.  “We get to cook, and we get to eat, that’s the best part,” he adds.

This semester’s pilot class has been so successful that TCU, TCOM, and Moncrief are looking for ways to expand the program.   “We have to figure out how to open this up to more medical students, to physicians doing their residency training, to physicians who are already practicing and ultimately, to patients as well,” Argenbright  says.