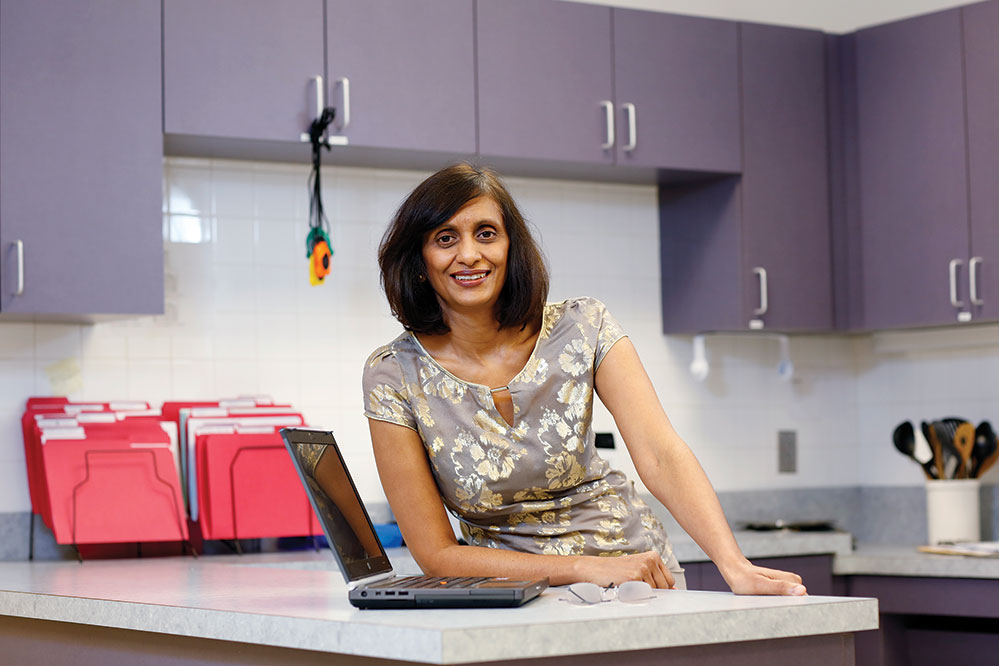 Professor of kinesiology Meena Shah has authored a study examining the link between eating speed and food intake in both normal weight and overweight and obese subjects. (Photography by Carolyn Cruz)

Ever notice how some people seem to take forever to finish a meal while others gulp it down almost instantly? And how those diners who eat with leisure tend to leave more food on their plates.

TCU researchers have been examining the link between eating speed and food intake in both normal weight and overweight and obese subjects.  In a study recently published in the Journal of the Academy of Nutrition and Dietetics, the researchers found that diners who took more time eating between bites tended to consume less food and fewer calories and felt less hungry later on.

“Slowing the speed of eating may help lower energy intake and suppress hunger levels and may even enhance the enjoyment of a meal,” said Meena Shah, professor of kinesiology and one of authors of the study.

The research findings were published around New Year’s Day, just as Americans typically resolve to embrace healthier habits and lose weight. Shah and her team were quoted in an array of media from Science Daily to U.S. News & World Report.

The actual research was conducted a couple of years ago on campus by Jennifer Copeland ’13 MS. Shah and Copeland, then a graduate student in kinesiology and now earning a nursing degree at Texas A&M University, were interested in the role eating behavior plays in how much food a person consumes.

Shah said only three studies had looked at how eating speed had an impact on calorie consumption in normal weight versus overweight and obese individuals. She said those studies had conflicting results.

“We noticed there were several limitations in these studies,” Shah said. “The sample size was small. The studies did not report controlling for physical activity and energy intake prior to the eating conditions or eating episodes, and two of the three studies did not randomly assign the subjects to an eating condition. We addressed all these limitations in our study.”

The researchers recruited 70 individuals – 35 normal weight and 35 overweight and obese subjects as defined by their body mass index, waist circumference and percent body fat. All the subjects ate the same meal of vegetable pasta in two different conditions – one at a leisurely pace where they were told to take smaller bites, chew longer and pause and put the spoon down between bites and one at a fast pace where they were instructed to eat as fast as possible.

“Once they finished eating, we measured how much they ate,” Shah said. “We provided them with a specific amount of food and weighed the food not consumed.”

Subjects were also asked to complete a questionnaire measuring their feelings of fullness and hunger both before and after the meal.

The investigators found that both groups consumed fewer calories when eating slower, but normal-weight subjects saw a significant decline.

Those in the normal-weight group consumed 88 fewer calories in the slow meal compared with the fast meal and overweight/obese individuals ate 58 fewer calories when taking their time.

Shah said the overweight/obese group actually consumed less food in both eating settings, which may have contributed to the smaller difference in their intake between the slow and fast condition.

“Other studies have shown that overweight and obese individuals tend to eat less food when they are observed by others compared to when they are alone,” Shah said. “Normal-weight subjects do the opposite.”

Shah said the difference in calorie intake between the slow and fast condition could add up over time. Consuming 88 fewer calories each day may result in a weight loss of nine pounds after a year. A 58 calorie-reduction may result in a six-pound weight loss, she added.

In addition, the difference in calorie consumption between the two meals may have been partly influenced by the amount of water they drank in each of the meals. Overall, participants in both groups drank 9 ounces of water during the fast meal compared with 12 ounces in the slow meal.

Normal-weight subjects drank 27 percent more water in the slow meals and overweight/obese individuals drank 33 percent more in the slow meal. This may have caused more stomach distention during the slower eating condition and a greater sense of fullness. The slower eating may have also allowed more mindful eating and greater awareness of fullness.

With obesity rates continuing to rise in the United States, information about how people can cut back on calories while still feeling satisfied can pinpoint healthy strategies to win the battle of the bulge.

“It all goes back to following what your mother said,” Shah said. “Eat slowly and enjoy your food.”