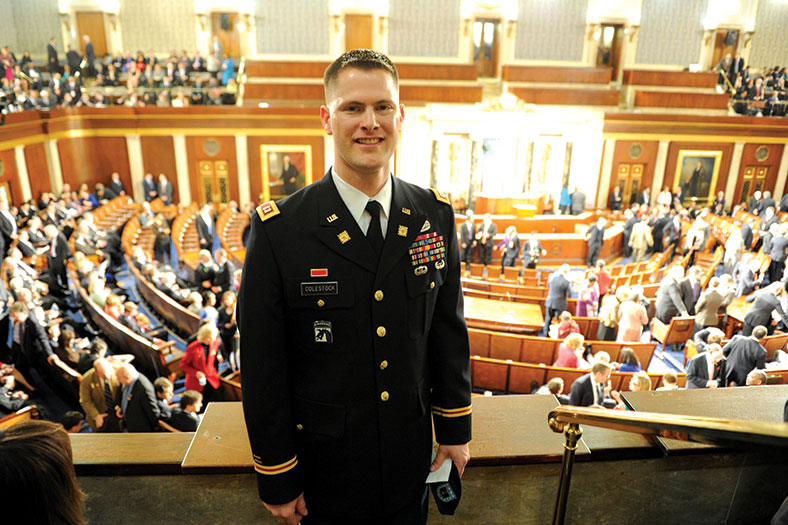 Army Cpt. Trent Colestock ’04, shown here at the State of the Union Address in Washington, D.C., is a military defense liaison for Rep. Mike Conaway, R-Texas.

Trent Colestock’s ’04 sense of duty seems to come naturally. He has been serving his county since before, during and after his years at TCU.

Most recently, Army Cpt. Colestock, shown below at the State of the Union Address, has been learning the ins and outs of congress as a military defense liaison for Rep. Mike Conaway, R-Texas, while rounding out his master’s degree in legislative affairs from George Washington University.

“Right now, it’s a very special time in Congress in relation to the armed services, and budget items that affect the military greatly,” Colestock said. “I’m glad to help [Conaway], and to tell him what we think about in the military and relay the word to him.”

Colestock, 34, enlisted in 1997, starting him on the path to civil service. After being  stationed in Fort Drum, N.Y., for four years, the Mineral Wells native took his military career to Fort Worth as part of the Horned Frog Battalion.

Service continued, and an Iraq deployment and Bronze Star later, he is now working as a voice for his fellow soldiers on Capitol Hill.

“Veterans who return home are facing issues, and I want to make sure I am there to take care of them,” Colestock said. “Every issue is a learning experience, but also I see every challenge to make sure I’m taking care of the person right away, effectively and successfully.”

Though being away from Cowtown tugs at his heart, Colestock keeps some future hopes for his college home, including a few long-term career goals.

One option he is eying is a return to TCU to work with the ROTC staff.

His other goal, however, might take the father of two a little longer to accomplish.

“I would say my top two dream jobs in the political arena are mayor of Fort Worth or governor of Texas.”