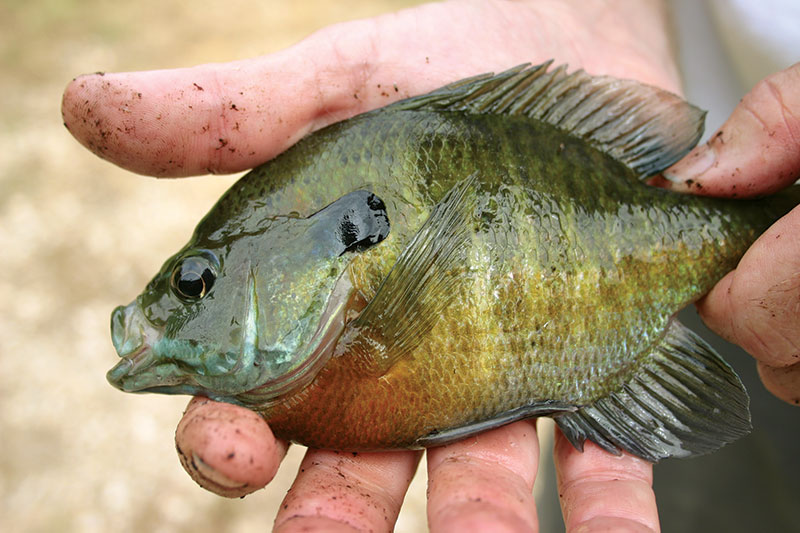 Trying to understand mercury contamination in the fish and insects of lakes and ponds in the South Central U.S. during the past 10 years has produced 19 scholarly papers and 93 scholarly presentations by TCU biologists Matt Chumchal ’03 MS and Ray Drenner, and five of their graduate students. Undergraduate students also participated, giving them a chance to participate in real-world research projects, something few undergraduates get to do. Chumchal is quick to note that this work could not have been done without many collaborators across the country who contributed data, expertise and access.

Intensively sampled Caddo Lake, Lake Meredith, Lake Amistad and the Rio Grande River with collaborators from Texas Parks & Wildlife (TPWD), Texas State University, Texas Tech University, University of Oklahoma and the University of North Texas.  Found that fish species, size of fish, sex, position in the food chain and habitat use all play a role in determining a fish’s mercury concentration. These findings are described in a series of seven publications.

Summer 2005
The TCU Magazine writes about the research, including how TCU researchers are looking into how mercury affects the fish populations and what steps can be taken to protect people from contamination.

2005-2008
Spatial patterns of mercury contamination studied. First collaborated with TPWD to collect largemouth bass from Metroplex reservoirs. Expanded the study across the state with TPWD sending coolers of frozen fish samples from around the state. Collaborated with Steve Wente at U.S. Environmental Protection Agency (USEPA), who developed a statistical model for comparing fish collected using different sampling techniques. Found that mercury levels in fish were highest in east Texas, where factors associated with mercury contamination problems are prevalent: including high mercury deposition and high forest and wetland coverage.

2008-2012
Expanded study of spatial patterns of mercury contamination to six states in the South Central U.S.: Texas, Oklahoma, Arkansas, Louisiana, Mississippi and Tennessee. Began collaborating with David Gay and Christopher Lehman, scientists at the National Atmospheric Deposition Program, and David Donato with U.S. Geological Survey (USGS). Found that mercury deposition modified by conifers explains most of the regional variation in mercury concentrations of largemouth bass. It is the first study to show this.

2011-2012
In a first of its kind experiment, found that fish regulate mercury flux out of ponds by invertebrates. More mercury is transported by emergent invertebrates out of systems without fish than systems with fish.

The future
Examine the mercury-related risk of different sizes and species of fish to humans, birds and fish.

Related stories:
Mercury rising — What you don’t know about mercury contamination in our environment, but should
What is mercury and why is it a concern? — The basics of the element
The TCU Magazine Summer 2005 cover story — Safe to eat?