The doctors are in . . . a century of Pre-health Professions at TCU 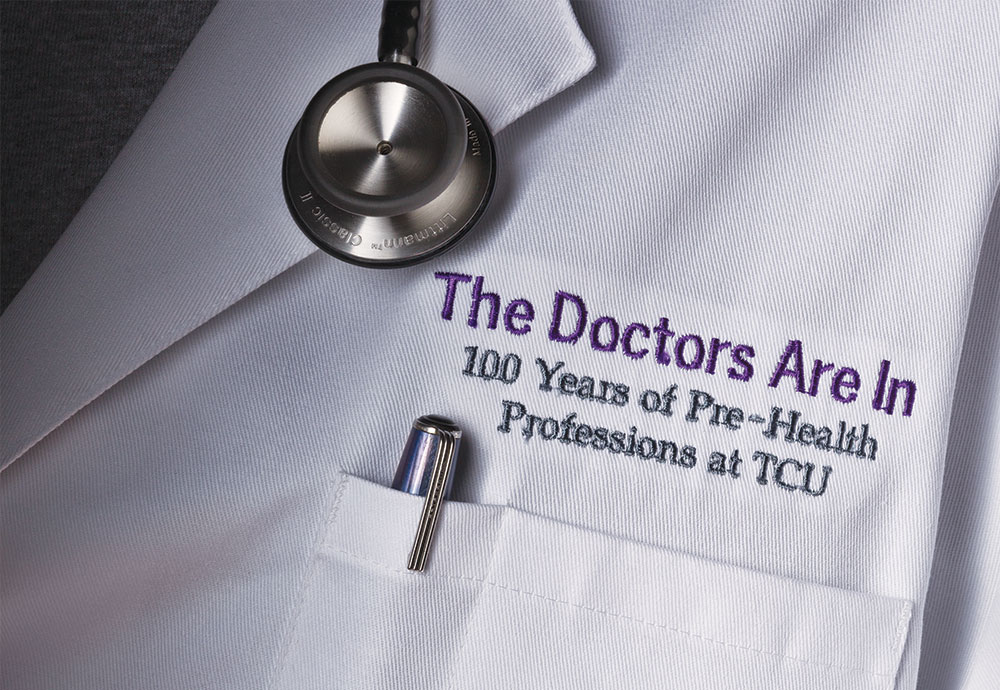 In September, TCU renamed its pre-med and pre-dental program to the Pre-Health Professions Institute. "We are confident [it] will become even more distinctive," said Chancellor Victor J. Boschini, Jr. at Convocation. (Image by Gary Logan)

The doctors are in . . . a century of Pre-health Professions at TCU

As a high school senior in Michigan, Chris Kim knew he wanted to be a doctor but was trying to decide which college would best prepare him for medical school.

“I was looking for good financial aid and a top-notch pre-health program and was deciding between TCU and Vanderbilt,” he said. “I decided to go to TCU because it offered small classes and a good chance to connect one-on-one with the professors.”

Kim graduated from TCU’s pre-health program in 2011 and is now in the third year of a dual M.D.-Ph.D. program at the University of Texas Medical School in San Antonio. He credits the hands-on opportunities he had to conduct research alongside TCU professors with his desire to earn a doctorate in microbiology then go on to medical school and residency.

For more than a century, TCU’s Pre-Health Professions Program has prepared students to go on to post-graduate schools, putting them on the path to medicine, dentistry, pharmacy and other health professions through rigorous coursework, access to high-quality clinical experiences and personalized academic and pre-professional advising delivered by faculty mentors.

Now the program is poised to enter a new era, evolving into the Pre-Health Professions Institute, aimed at raising its profile nationwide.

“Because of this added prestige, we are confident that pre-health professions education at TCU will become even more distinctive,” Chancellor Victor J. Boschini Jr. said in making the announcement at the university’s annual Convocation on Sept. 10.

Over the past 30 years, approximately 1,000 pre-health alumni have been accepted to professional schools around the country including Harvard, Johns Hopkins, NYU and all 13 medical and dental schools in Texas.

“TCU’s 80 percent acceptance rate into medical school over several decades is double the national average and a testament to the quality of the program,” said Matt Chumchal ‘03 MS, associate professor of biology and director of the institute.

While medical school is the most common destination for pre-health graduates, it’s not the only one. Alumni go on to a variety of medical professional programs and eventually begin careers as dentists, physician assistants, veterinarians, optometrists, pharmacists and podiatrists.

This fall, the institute has 577 students including 184 freshmen, about 10 percent of the class. They must complete a demanding curriculum that includes at least two years of coursework in biology and chemistry and a year of physics.

“The program is rigorous, but they make sure that you are not only prepared, but that you are overprepared for med/dental school in order to help ensure your future success,” she says.

The deans at medical, dental and other professional schools see the quality of TCU’s program in the performance of its graduates. For example, at UT Southwestern Medical School in Dallas, the average medical school GPA of TCU graduates in the program is 3.52, higher than the 3.37 average.

In addition to a challenging curriculum, students also get honest advising and faculty counseling to let them know if they are measuring up to the demands they will likely face in medical school. Prior to applying to professional school, they undergo three mock interviews to prepare for the actual interview process.

TCU’s Health Professions Advisory Committee (HPAC) is the heart and soul of the Pre-Health Professions Institute. HPAC consists of faculty members who teach pre-health courses and advise pre-health students, and Chumchal said that means they get to know the students very well.

“Our advisors have an open door policy and care deeply about their students,” he said. “Committee members help students select courses and assess each student’s academic progress at least once a semester. In addition, faculty members provide counseling regarding the health professions and evaluate, both for the student and for the professional schools, the student’s suitability for entering the profession.”

“Advisors have a personal knowledge of the applicants and hence can advocate for them separate from simply grades and entrance exams,” said Dr. David Jones, senior associate dean for admissions at the University of Texas School of Medicine at San Antonio.

Even alumni who have been out of school for many years say their TCU education made all the difference when it came to getting into and surviving medical school. Dr. Stephen L. Brotherton ’78, an orthopedic surgeon in Fort Worth and president of the Texas Medical Association, says the intimate size of TCU’s program allowed students to forge close ties with professors.

“There was a big difference between what I experienced at TCU and what my friends experienced at larger schools,” Brotherton said. “At TCU, you knew your status; they would try to guide people to the right place.”

Manfred Reinecke, professor emeritus of chemistry who led the program from 1972 to 1991, said it’s important for graduates to be academically prepared for the rigors of medical school, but it’s also important to let them understand the demands on doctors, dentists and other medical professions.

“When we’d first get pre-med students, we liked to get them into an amphitheater looking over an operating room,” he said. “Getting access to those firsthand experiences is important for students to know if this is for them.”

Exposing students to real-world medicine remains an important goal of the program. Its student-run clinical observation program has arrangements with 20 clinics and hospitals where students observe doctors, dentists, physician assistants and also interact with patients.

A rigorous curriculum combined with ample faculty advising has always been a hallmark of TCU’s pre-health program. Joan Hewatt Swaim ’56, whose father Willis G. Hewatt ran the program from to 1950 to 1972, remembers her father issuing very strict requirements for students interested in going on to medical school and by junior year most knew if they had made the cut.

“He made a lot of kids cry who wanted to be pre-med or pre-dent, but he said, ‘You need my recommendation or you’re not going to get in.’ He would recommend other careers. It was a tough field then and it’s tough now.”

“They said if you made it through Hogan, Hewatt and hell, you’ll get into medical school,” Swaim said. “But by golly they knew something when they got out.”

TCU’s pre-health program’s intimate size makes it feel like a family. Swaim, whose mother also worked in the biology department, says students were treated like part of the family and her parents regularly hosted students at picnics in their backyard. That tradition has carried on through the years with Hewatt’s successors – Reinecke and Phil Hartman, who headed the program from 1991 to 2013, –  also hosting parties at their homes and will continue this fall with a holiday get-together at Chumchal’s.

Thanks again to TCU’s intimate setting, students often get hands-on research opportunities not always possible at larger schools. For example, Ashley Bolin ’13 was able to conduct her own research project under the guidance of Michael Chumley, assistant professor of biology and pre-health advisor.

“Not only did this give me research experience and strengthen my medical school application, but I also gained a mentor during my TCU years and for the rest of my life,” adds Bolin, now in her first year of medical school at the Medical College of Wisconsin.

The tight community connection with the medical professionals in greater Dallas-Fort Worth is also a source of strength for the program. Many area physicians teach biology seminar classes and offer guest lectures.

Since 1995, TCU students have participated in a scribe program, working alongside doctors during patient evaluations, recording patient history, complaints and test results and preparing plans for follow-up care.

Whitney Summers ’12 says her work as a scribe in the emergency department of a local hospital solidified her decision to become a doctor.

“This was much more than a job; it has been a realistic glimpse into medicine. From learning the terminology to managing the workflow, working firsthand with medical professionals provided me with a wealth of knowledge and experience that cannot be taught in a lecture hall,” says Summers, now studying at Tulane University School of Medicine.

Another avenue for students to get hands-on training and leadership opportunities is through Alpha Epsilon Delta, the national honor society for pre-professional health students. TCU’s chapter, Texas Zeta, sponsors a speaker series, an extensive hospital observation program and multiple service and social activities throughout the year.

TCU’s AED chapter dates back to the 1970s and was named best chapter in the nation in 2010. Students organize and lead chapter meetings, which regularly draw more than 100 students.

To become an official member of AED, students must have a 3.2 GPA or higher in science courses and sophomore standing, be fully CPR certified and complete several hours of volunteer work.

AED’s service projects include Heroes for Children, which provides support for families with children diagnosed with cancer. At its annual holiday event, families receive gifts and get to make crafts with Santa Claus and SuperFrog.

Students can also volunteer to play games and make crafts with children who are patients at Cook Children’s Medical Center. For Thushara Galbadage ’07, this opportunity was a highlight of his time at TCU.

“We were given the opportunity to spend time and care for patients and their siblings on a weekly basis,” Galbadage says. “This experience showed me the caring aspect of medicine and increased my desire to serve patients.”

All these strengths have helped the Pre-Health Professions Institute attract top students. One-third of all TCU Chancellor’s Scholars are in the pre-health program and more than 37 percent of this year’s freshman pre-health majors had SAT scores topping 2,000, up from about 20 percent in 2007.

Even though the program is widely viewed as the best in Texas, campus leaders wanted to make it even better. In 2011, Demitris Kouris, former dean of the College of Science and Engineering, formed a committee to evaluate the Pre-Health Professions Program. That committee made a number of recommendations, including the formation of an institute and appointing an external advisory board made up of alumni of the program, as well as former professors and parents of current and former students. Provost Nowell Donovan approved the plan in spring 2012.

But as far as the student experience, the recommendation was simple — don’t change a thing.

“Our goal is to make an already strong program even better — without sacrificing the personalized nature of the program that characterizes TCU in general,” said Shauna McGillivray, assistant professor of biology and associate director of the Pre-Health Professions Institute.

Hartman, who was named dean of the College of Science and Engineering earlier this year, is proud of the program’s accomplishments and optimistic about the future.

“As the Pre-Health Professions Institute, we will continue our longstanding tradition of excellence in providing a rigorous education with one-on-one faculty advising to more than 500 students each year. Our 100-year-old program has much to celebrate and a remarkable opportunity to plan thoughtfully for an even brighter future.”

In celebration of 100 years of pre-health education, TCU is collecting recollections from students of various eras. Send your thoughts and memories to tcumagazine@tcu.edu.