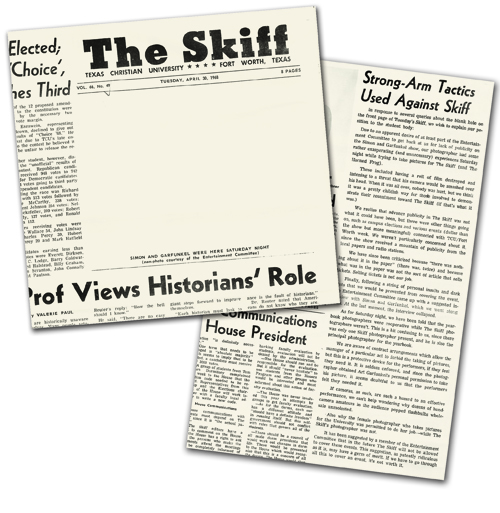 In one of the more unusual displays in the history of the TCU Daily Skiff, the newspaper printed a three-column hole of white space on the front page of its April 30, 1968, edition.

The caption below read: “Simon and Garfunkel were here Saturday night (non-photo courtesy of Entertainment Committee).”

According to an explanation three days later, the Skiff claimed that the Entertainment Committee, which organized the concert, ruined a roll of film and threatened to break the camera of a Skiff photographer as revenge for a lack of coverage in the paper leading up to the show.

The paper alleged that students on the committee lobbed insults at the photographer and pulled a promised interview with the band because “there was nothing about it in the paper.”

The Skiff claimed it printed two stories about it, along with TCU/Fort Worth Week, and the show was getting mammoth publicity on the radio. “Selling tickets is not our job,” the paper wrote in a scathing recap in its May 3, 1968, edition.

In the end, no one was hurt, but the paper’s editorial stand was talk of the campus the first week of May.

The Horned Frog yearbook did manage to snap photos that live on today (see photo, left), though the quality was a bit suspect.

Related story:
TCU/Fort Worth Week was a real town and gown mixer