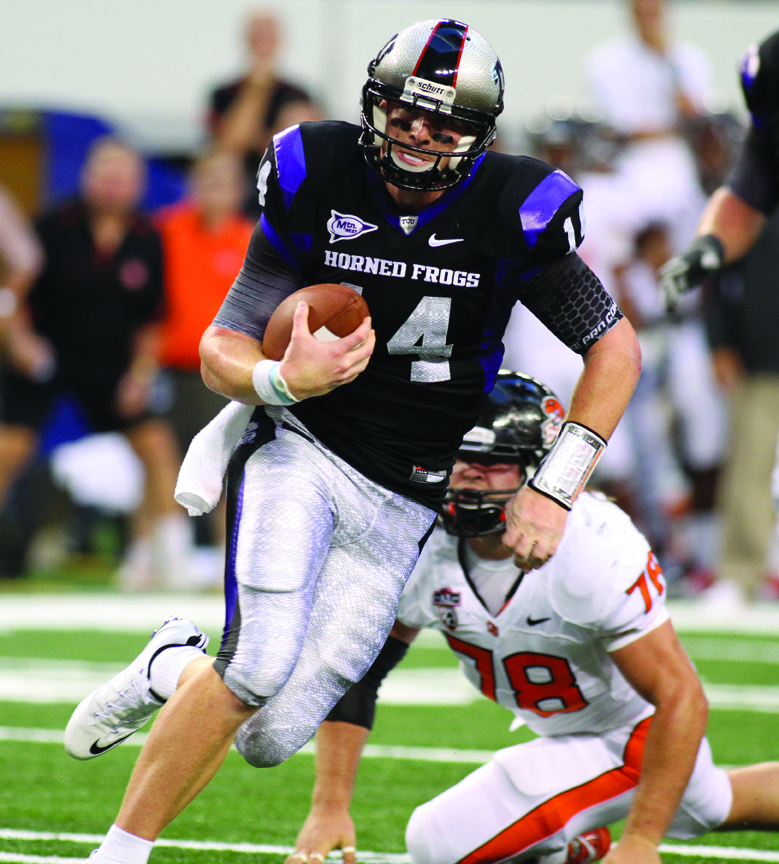 As much as Gary Patterson appreciates Andy Dalton today, he’ll hold his senior signal-caller in higher esteem when fall 2011 creeps around.

“Am I excited that he’s a fifth-year quarterback, and next year I’ll be back to a freshman, sophomore, or junior?” the TCU coach says. “Yes, I’ll really think this was a great time in my life every time I change over quarterbacks.”

Whoever’s next replaces a legend. The fiery competitor with flame-red hair is on pace to rewrite most — if not all — of the major school passing records. Dalton now owns the all-time passing yardage mark and entered 2010 one victory shy of breaking Sam Baugh’s record 29 wins. He’s also a shoo-in to overtake Max Knake’s mark of 49 career touchdown passes, and with the Frogs’ short passing game, Dalton could surge ahead of Jeff Ballard for the highest career completion percentage (61.1 percent).

“It’s an honor just to be mentioned with Sammy Baugh,” Dalton says. “It’s something that I haven’t done by myself. It’s been with the help of all my teammates.”

Dalton’s most impressive feat? Elevating the Horned Frogs into the elite. TCU earned its first BCS berth in January and, ranked sixth, enters the 2010 campaign with the highest-ever preseason spot in the polls.

“He’s raised his game a lot as far as being a leader out there,” receiver Jeremy Kerley says. “I’ve seen a major change in him just over the years that I’ve been here playing with him.”

Success hasn’t always come easily for Dalton, who struggled at times as a redshirt freshman. He showed greater consistency as a sophomore, leading the Frogs to an 11-2 record and a Top-10 ranking. As a junior, Dalton earned Mountain West Conference Offensive Player of the Year honors as the Frogs rolled to a 12-0 regular season.

“The big thing I took from my sophomore year to my junior year was to be more efficient,” Dalton says. “That’s something that I’m taking from my junior year to this year: to be even more efficient, the high completion percentage, making quick decisions, being smart with the ball, not turning the ball over.”

The 17-10 loss to Boise State still bothers him. “We didn’t play as well as we did the whole season,” Dalton says. “So we really took that through the spring and summer and used it as motivation for this year.”

Dalton’s focused on making the most of his final season – and savoring every minute of it: “I’m going to go and have a lot of fun. That’s one of the big things — to enjoy every day and cherish these opportunities because they’re numbered.”