Getting a jump on life: Neidra Covington 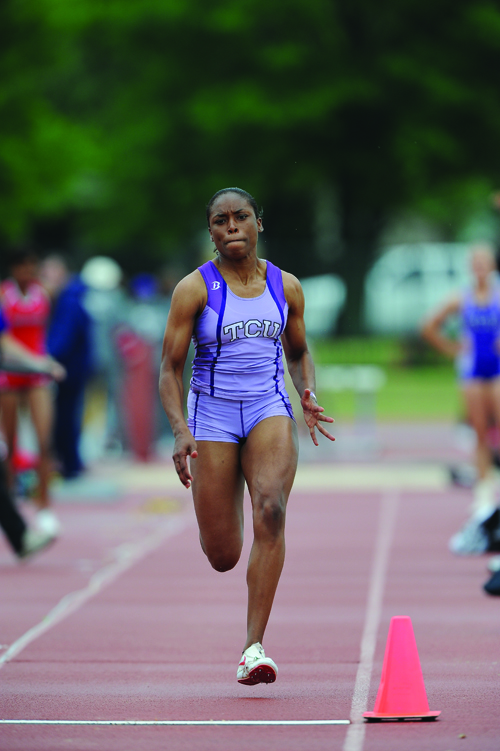 Getting a jump on life: Neidra Covington

Neidra Covington has had much success as a jumper for the TCU track team.

Now she’s hoping to help youngsters get a leap on getting ahead in their own lives.

Covington, 22, will graduate in December with a bachelor’s degree in sociology and a minor in social work.

“I love working with children. I want to be a medical social worker and a counselor,” said Covington.

Covington had done some volunteer work with children in years past, which whetter her desire to help them have a better life.

“Children are easier to work with than adults,” said Covington. “I love the idea of helping them get a head start before society gets ahold of them.”

However, Covington isn’t ready to give up her track career. The six-time All-American in the triple jump and long jump, and 2010 South Central Region Field Athlete of the Year would love to have a shot at every track athlete’s dream.

“The Olympic Trials are a possibility,” said Covington. “I know I’d have to work even harder than I have been, but it’s okay because I’ve never had a problem with hard work.”

TCU coach Daryl Anderson said such a goal is within Covington’s reach, with work and dedication.

“Her skill set is there, but she’s going to have to put in the time,” said Anderson. “She’s got the skill set to do it. She hasn’t capped her ability yet.”

Anderson also believes Covington’s experience on the TCU track team the past four years will help her find success in her off-track career.

“She can be successful in whatever she does,” said Anderson. “Track gave her a four-year platform, an opportunity to evolve.

“But even more help was the competition. She knows how to perform on a competitive day, but also how to prepare for that competition, be it on the track or in the workplace.”

Covington said participating in TCU track the past four years gave her more insight into others, and it certainly helped when it came to staying organized.