Brewing up a career change

Fritz Rahr ’89 (MBA ’93) gets back to his roots with new microbrewery.

Brewing up a career change

Fritz Rahr ’89 (MBA ’93) gets back to his roots with new microbrewery. 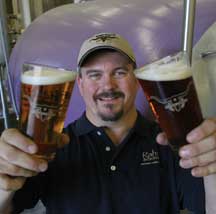 Frederick “Fritz” Rahr ’89 (MBA ’93) grew up in the brewing industry. Migrating from Germany in the mid-1800s, his family brewed until the Prohibition, and today the family business is the world’s fifth-largest malt producer. “I was a home brewer since I was 13,” Rahr admitted.

Rahr’s plan post MBA was to get back to beer, but he was sidetracked for 11 years by the transportation industry.

Now Rahr is back on track with his own microbrewery. Rahr & Sons Brewery opened this fall in Fort Worth to rave reviews. Its Rahr Blonde is a clean, crisp traditional southern German lager with lots of body and flavor, while Rahr Red is a Vienna style with more body and character. Ugly Pug, a German schwarz, is due out this fall, taking the Red a “few steps further in color and in body.” And on tap just in time for TCU football next fall is the Hoppin’ Horned Frog, an India pale ale. “That one will be our first true English style ale,” Rahr said.

But it won’t likely pour purple.

Rahr’s beers are brewed in strict accordance with the German Purity Law of 1516, have a higher malt content than most and are kept at a crisp 38 F. “And because we are in Fort Worth, we can guarantee the freshest beer in town,” Rahr said.

The brewery’s first bottle sales are slated to hit stores in December. “As soon as we can make sure we have enough product to meet the demand of the Metroplex area, we’ll start expanding into the Houston, Austin, San Antonio markets.”
Rahr said building a brewery from the ground up has been a lot of work, “but so far it’s paying off.”