Light through the clouds

In English Professor Jim Corder’s classroom, asking the right questions was more important than knowing all the answers.

Light through the clouds

In English Professor Jim Corder’s classroom, asking the right questions was more important than knowing all the answers.

When I came to TCU in the late 1960s, my friends in the Tom Brown-Jarvis Living/ Learning Experiment regaled me with stories about the greatest professors. They steered me to the exceedingly gracious Betsy Colquitt, who exuded a thorough knowledge about absolutely everything in Western art, humanities and music, not to mention life. They also enjoyed John Bohon, who paced relentlessly in his classroom, head bobbing, staring first at the floor, then at the ceiling — never at the students. His lectures were so compelling that no one laughed, even when he unknowingly strolled into the hallway before returning with another point about the Russian Revolution.

Tom Brown-Jarvisites ordered me to take Rhetoric and Literary Criticism from a genial man who wore a slightly loosened tie and whose bandana poked out of his hip pocket. Jim Corder’s homegrown stories about dust-choked farmers during the Depression illuminated Aristotle’s emphasis on ethos, or character, in persuasion. Talking about a hoe in a 1930s Sears Roebuck catalogue helped elucidate the overarching importance of rhetorical invention. Describing the Double Mountains of West Texas (where God lives) helped explicate rhetorical structure, style and memory.

By the time the course ended, Corder had convinced me that rhetoric enabled one to understand almost any discourse, from 18th-century British poetry to current magazine ads and television shows.

In 1980, Corder helped me return to TCU. Now occupying the dean’s office, he exuded cheer while sipping endless cups of coffee and constantly relighting his pipe. I used his state-of-the-art textbook to teach freshman English. Written in a down-home style that eschewed jargon, his essays kept appearing in the best national journals. His aw, shucks narrator closely resembled the immensely likable person I knew. Not only did Corder know rhetoric, Corder was rhetoric. Although he took a mysterious leave of absence while I was writing my dissertation, Gary Tate, Betsy Colquitt, and David Vanderwerken steered me toward graduation.

After I got a job at Ohio State University, I continued to read Corder, who kept pouring out essays for scholarly venues, plus columns for this magazine. I cherished his reflections on ethos and invention and his conception of rhetoric as the study, theory and practice of every form of discourse.

But gradually I decided that he had fooled me badly. Far from being the heart of rhetoric, his writing seemed exceedingly idiosyncratic. I discerned reasons that no one else wove anecdotes about childhood, regional geography or pipe smoking into their scholarly research. I learned, painfully, that I could do scholarly writing only by refusing to imitate him. After I embraced a more orthodox approach, editors finally began to publish my essays. Corder and I met at conferences and held long, friendly conversations. But I stopped reading his homespun prose. It seemed far too simple, yet not exactly clear and anything but a model.

Still, he had pulled me into my career. In 1998 my 2-year old son, Andrew, and I flew to Fort Worth to visit him on his deathbed and to see Gary Tate, Betsy Colquitt and Corder’s wife, Roberta. When she asked me to retrieve unpublished manuscripts in his office at Reed Hall, the aroma of pipe smoke hit me as soon as I opened the door.

Months after his death, I decided again that Corder had seriously fooled me. Not only was my first version of him wrong, so was my second. I had to replace two layers of illusions and reconstruct Corder and myself.

The process occurred gradually. About a year after his death, I picked up books he had written in the 1990s. In Chronicle of a Small Town, an account of his hardscrabble boyhood, his narrator interrogates memory, a major element of ancient Greek and Roman rhetoric. The autobiographical Corder maintains that his recollection of the 1930s — and all memory — is as inaccurate and illusory as it is indispensable. Hunting Lieutenant Chadbourne treats similar issues while analyzing the brief life of a virtually unknown lieutenant in the Mexican War. Yonder explains Corder’s mental breakdown in the 1980s — when I was writing my dissertation — and his psychiatric treatment for severe depression. Each of these volumes is a highly readable and complex exploration of loss — not what I expected when I opened them.

Then I began rereading Corder’s simple, yet cloudy essays from the 1980s. To my chagrin, I realized that they had deceived me. Both when I loved them and, later, when I dismissed them. I kept rereading. The charming informality of his personality and writing, I decided, was a disguise. As with his 1990s books, the narrators of these essays constantly reversed and corrected themselves as they went along. That strategy violated the procedures advocated in every writing textbook, including Corder’s own. 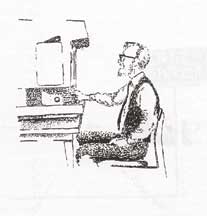 Why did he do that? I think he sought to spur readers to puzzle through problems by following an often errant narrator, who makes highly sophisticated but often unsuccessful attempts to resolve complicated issues. Orthodox scholarly prose was far too conclusive for Corder. The search was the point.

By the late 1990s, many other scholars in English were blending personal and scholarly writing. Even though they usually failed to cite Corder’s example, they were vindicating his method. One of his idiosyncrasies had become, in certain circles, de rigueur.

Another of Corder’s former students, Theresa Enos, and I co-edited a book of essays related to Corder: Beyond Postprocess and Postmodernism: The Spaciousness of Rhetoric (recently published by Lawrence Erlbaum). Contributors include 15 well-known scholars from around the nation. Last spring, at the University of Arizona, Theresa taught an entire graduate seminar on Corder. His former colleague and sometimes co-author James Baumlin and I decided to edit Selected Essays of Jim W. Corder, which the National Council of Teachers of English recently published. This book includes substantial, posthumous excerpts from the unpublished volumes that he left behind at his death.

Theresa, James and I undertook these projects because we consider Corder’s vision and practice of rhetoric and writing still ahead of its time. A number of people nationwide who teach composition — some of whom never met Corder — strongly agree. Why? Well, for one thing, every other rhetorical theorist will tell you what rhetoric is. Corder invites you to join him in discovering it.

At the moment I’m trying to write a book about Martin Luther King and the Bible. I’m stymied by prophets whom King liked to quote. Amos and Micah present metaphors of a great, harmonious community but quickly reverse themselves by offering images of utter doom. Most of the rhetorical theory that I know seems useless in explaining this powerful contradiction. Perhaps Corder’s self-reversing and self-correcting rhetoric — and his themes of harmony and loss — can help me understand.

I’m still reconstructing myself. I expect that five years from now I will read his work very differently than I do now. Even though I don’t want to rebuild myself yet again, I might not have a choice.

Jim Corder was never the simple teacher or writer that he pretended to be.

Keith Miller ’71 is a Professor of English at Arizona State University. Members of his family earned a total of eight degrees from TCU, having attended the university in every decade from the 1940s to the 2000s. They include his father Ernest Miller ’49, mother Doris Miller ’50, brother Kirk ’85 and his wife Diane, and their daughter Jessica Miller Garcia ’01 and her husband Simon Garcia ’02.