The president of a company turned into an internet cooking celebrity overnight.

When Urvashi Pitre ’89 MS (PhD ’94) arrived from India to attend TCU in the mid-1980s, settling into a new culture and her graduate studies left little time or inclination for cooking. Urvashi Pitre prepares butternut squash soup with ginger, a popular recipe from one of her Instant Pot-endorsed cookbooks. She is a popular blogger and posts cooking videos on her YouTube channel. Photo by Carolyn Cruz

Fast-forward to 2017: Urvashi Pitre (pronounced ERV-uh-she PIT-tree) was becoming an internet cooking celebrity, known to her fans as the Butter Chicken Lady.

Late one night in March 2017, Pitre posted a recipe for butter chicken in the Instant Pot Community Facebook group, which has about 1.8 million members. It wasn’t the first time she had posted, but the easy 30-minute recipe captured the attention of time-pressed cooks who had eaten only the mildly spiced Indian-style curry at restaurants.

Why did this recipe turn her into an overnight internet sensation? “That’s the $64 million question,” said Pitre, who studied experimental psychology at TCU.

She had inadvertently cracked the code to faster Indian cooking.

“Cooking Indian food can be intimidating and exhausting to even read [a recipe],” Pitre said, let alone allowing a day for the dish to simmer.

By September 2017, Pitre had created and tested recipes for the first authorized Instant Pot cookbook for Indian cooking, and her suburban home in Keller, Texas, had morphed into a test kitchen and photo studio. She has since written five more cookbooks, with recipes for low-carb and ketogenic (low carb, moderate protein and high fat to control insulin release) dishes.

Stories about the home cook-turned-internet sensation have been featured in The New Yorker, The Dallas Morning News, the Chicago Tribune, Food52 and, in October, The New York Times’ Food section as her culinary influence grew with her blog, several Facebook groups, how-to videos and culinary tours to India and Belize.

“I can’t do something just casually,” Pitre said about her deep dive into the food world. “I totally made it my second job.”

Not that Pitre needed another job. She is president of Dallas-based Tasseologic Inc., a data-driven customer-relationship management company. Her career has her globe-trotting to pitch to the CEOs of Fortune 100 companies. Don Dansereau, professor emeritus of psychology, describes his former student as “very articulate and a very good thinker” as well as “prolific” in her work. But he recalls that she often spoke so fast that he’d ask her to slow down in presentations.

Dansereau, who calls himself a “fueler rather than a foodie,” was surprised to learn of Pitre’s culinary fame. After watching some of her online cooking videos, he was impressed. “I sure liked the way she presented,” he said, adding that her cadence has slowed.

Pitre is driven to succeed in whatever she decides to tackle. Her husband, Roger Gorman, points out that “all this has happened in 12 months because she worked 17 hours a day.”

But Pitre is the first to admit her breakout recipe also intersected with the meteoric rise of the kitchen appliance with the most cultish following since the Crock-Pot.

“I can’t do something just casually. I totally made it my second job.”
Urvashi Pitre

“People weren’t leveraging the pressure cooker to do everything they are capable of,” she said of the Canadian-designed Instant Pot, known generically as a multicooker. The Instant Pot functions as a pressure cooker, slow cooker, yogurt maker, dessert maker and more. The NPD Group, a market research firm, began tracking sales in 2015. By 2017, sales of multicookers had increased 79 percent to nearly $300 million, and the appliance is predicted to achieve “exponential” growth since only 11.5 percent of U.S. households own one.

A few of Pitre’s 2018 greatest Instant Pot hits include South Indian chicken curry, Indian pulled pork tacos and cioppino seafood stew. A self-confessed gadget geek, Pitre has added the air fryer — an appliance she describes as “a convection oven on steroids” — to her repertoire.

Although she has no professional culinary training, Pitre has the rare ability to know what something will taste like before she cooks it. She tests a recipe once, and 9 times out of 10 it works, said Gorman, her in-house taste tester and a former professional photographer.

As a couple, Gorman and Pitre underwent vertical-sleeve gastrectomies, a weight-loss surgery available in Mexico. Pitre lost 80 pounds. She started a diary and began sharing the keto-based recipes on her blog, Two Sleevers (twosleevers.com), which has about 750,000 views a month.

Pitre, who has rheumatoid arthritis, finds opening cans challenging and chopping difficult during flare-ups. Instead, she uses pre-diced tomatoes and doubles the recipe so the excess sauce can be used for another night’s meal. She even suggests using frozen chicken thighs — a lifesaver for busy cooks who don’t plan for dinner until 4 p.m. Pitre’s tips and tricks interested Fabiha Kumari, who has been known to subsist for long stretches on popcorn and whose local pizza place recognizes her phone number. The native of India also is not much of a butter chicken fan.

“Butter chicken is gateway food for Americans,” she said. “It’s mild. The flavor profile is not that deep or complex.”

But Kumari, a Northern Virginia-based technology and logic expert, was attracted to the “hands-off, speedy nature” of the Instant Pot. Kumari joined the Instant Pot Community Facebook group but realized that while some of the recipes were good, others lacked precise measurements and yielded inconsistent results.

By contrast, every recipe Kumari made from Pitre’s blog or cookbooks worked like a charm. “She is America’s Test Kitchen and then some,” Kumari said, noting Pitre’s reliability has earned her the hashtag #trusturvashi.

Kumari wound up buying an 8-quart Instant Pot, a professional vacuum sealer and a stand-alone freezer to make her favorite Pitre recipes for kheema, lamb rogan josh and seekh kebabs, “because if I’m going to be in, I’m all in.”

Kumari may qualify as Pitre’s biggest fan, often giving friends, family and even the UPS delivery guy copies of her cookbooks.

Accessibility is another key ingredient to Pitre’s success. If a group member tags her with a question, she answers, unfailingly courteous and prompt with her responses. 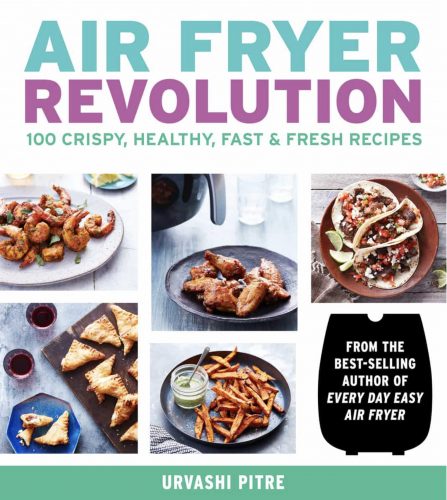 “She genuinely likes people, and she spends hours and hours answering their questions,” Gorman said. “She remembers names, what they are doing. She has their background in her head.”

But in return, Pitre also expects her food followers to use their best table manners when interacting within the community she leads: no negativity, no bad-mouthing other people’s recipes and no puke emojis.

The Butter Chicken Lady is expanding her cooking moniker with the addition of internationally inspired recipes, such as Turkish shish kebabs made in the air fryer, Instant Pot Brazilian pão de queijo and low-carb chicken shawarma.

“I feel like it opens doors to cultures, and we live in an age where we need to be culturally aware,” Pitre said.

Creating a civil discourse online — one with a depth that can expand to face-to-face interactions — is important to Pitre. “The point is to enable a community of like-minded people to get together and be inspired to do things together. Recipes are not the end goal,” she said.

So what’s next — a cooking show, a spice collection, a new appliance, a line of cookware or even a vacation?

“I don’t know. It’s really unclear,” Pitre said in a very un-Urvashi moment. “I’ve got to let the universe unfold, which is foreign to me.” In a large bowl, stir together the Greek yogurt, garlic, tomato paste, oil, lemon juice, salt, cumin, paprika, cinnamon, black pepper and cayenne pepper until the spices are well-blended into the yogurt.

Add the chicken pieces and mix until the chicken is well-coated with the marinade. Allow the chicken to marinate for 30 minutes or up to 24 hours in the refrigerator.

Test with a meat thermometer to ensure the chicken has reached an internal temperature of 150 degrees before serving.

Topics: Alumni, College of Science & Engineering, Friend in the Business Where to Eat in Fort Worth Students learn to plan, prepare and present gourmet food, with a focus on nutritional value and visual appeal.