From Latin America to Asia to Europe, Germán Gutiérrez has traveled the globe to teach or conduct orchestral music. But when he was invited to direct the Lebanon Summer String and Orchestra Workshop in 2014, friends and family worried about his safety.

“All anyone hears about Beirut is how unsafe it is,” said Gutiérrez, director of orchestras at TCU, “but that is where we need to go. We need to go to the areas with problems and see how we can help elevate the spirit.” 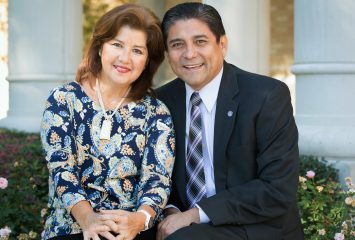 Germán Gutiérrez, right, and his wife, Silvia, outside of Landreth Hall. Photo by Beatriz Terrazas

The globe-trotting Gutiérrez had humble beginnings. The fourth of eight children, he grew up in Ibagué, Tolima, the musical capital of Colombia. “He comes from a family with not too many monetary resources,” said his wife, Silvia Gutiérrez.

But Gutiérrez did not let finances deter his musical ambitions. At 9, he was accepted as a violin student into Tolima’s music conservatory. At 20, he urged his parents to quit working, and he began supporting them. “When he was not studying, he was working,” at a music store, performing at weddings or giving music lessons, Silvia Gutiérrez said.

The couple came to the U.S. in 1988 so Gutiérrez could study with his eventual mentor, Panamanian composer Roque Cordero, at Illinois State University. In 1996, Gutiérrez was hired to lead TCU’s orchestras and brought his Latino musical roots to Fort Worth.

Gutiérrez’s orchestras perform music from many cultures but especially pieces by Latino composers. He said he believes the musical diversity will enrich the lives of both students and audience members.

“We need to broaden our horizons,” Gutiérrez said. “The world is connected today. It’s not like 30 years ago that to go to Europe, you [needed] to take an airplane. … We need to know each other. And by getting to know each other, that eliminates the prejudice and the stereotypes.” When Gutiérrez first arrived in Texas, he was impressed with Fort Worth’s large Latino population, which as of 2010 composed more than a third of the city’s population, reports the U.S. Census Bureau.

“I suggested, ‘We are in a very large Latino community,’ ” Gutiérrez said of his early conversations with administrators at TCU. “ ‘I would like to propose to you to create a Latino-American music center. … But I don’t want this center to be for theory or musicology, but to make Latin American music.’ ”

Rather than a brick-and-mortar building, the center is a virtual network, he said, the focus of which is the Latin American Music Festival, a biennial series of free concerts, which started in 1998.

Gutiérrez said he hoped the center and festival would attract “the best students from Latin American countries … and at the same time we give the opportunity to our faculty and our students to get in touch with the best from Latin America.”

Each iteration of the festival is valuable because it’s “great for our students and great for our community,” Gutiérrez said. “We have people living here for years and years, decades, and they might not get a chance to hear … symphonic music from Latin America.”

The October 2017 festival was a tribute to Gutiérrez’s late mentor Cordero. The TCU Symphony Orchestra and Concert Chorale premiered Cantata Para la Paz (Cantata for Peace), an ambitious 1979 Cordero composition that was commissioned by the National Endowment for the Arts but languished unperformed.

Conducting the cantata’s premiere was “very emotional,” Gutiérrez said. He promised Cordero the song would one day be performed before live audiences. “I said, ‘Don’t worry. I will premiere it someday,’ without knowing that that was going to be a possibility.”

For the Love of Music

Gutiérrez shares his passion for the world’s music with both listeners and aspiring musicians. He has been music director for the Youth Orchestra of Greater Fort Worth since 2000. “For me, working with the kids is number one,” he said. “I know that with them, I have to work harder. I don’t have the same result that I have with a professional orchestra.” Germán Gutiérrez speaks to the audience before conducting the TCU Symphony Orchestra in Roque Cordero’s Eight Miniatures for Orchestra. This performance was one of several during the 2017 Latin American Music Festival. Photo by Beatriz Terrazas

But the reward is more personal because what they learn will carry over into any career, he said. “A child in the orchestra learns to respect others. He learns to listen. He learns to speak when he has to speak, when he has the solo. … So when I am working with kids, I’m not just thinking I’m going to have a great concert. I am producing a better human being.”

Gutiérrez, on sabbatical for most of 2017, worked in Hong Kong, Ecuador, Colombia, Peru and Mexico. He frequently teaches at Mexico’s Vicente Fox Center of Studies, Library and Museum in San Francisco del Rincón, Guanajuato.

Eddie Airheart ’16 MM, a doctoral student in conducting at TCU, also traveled to the Fox Center to work with students and conductors. “I’ve had friends that have gone and have worked specifically in Mexico,” he said. “All of them have just come back changed. They’re invigorated with passion for music; their worldview is broadened.”

Airheart shares Gutiérrez’s view that music can build bridges. “An orchestra, a band or a choir are the only organizations on earth where people come together to do one thing, and that is to agree,” he said. “And what happens when we agree is called beauty. And that resonates so deeply within me.” Gutiérrez “has a way of simplifying instruction to a level that can transcend any experience and any idea,” said Marla Ringel ’08 (’10 MMEd), a doctoral student in conducting at TCU. “It speaks to his ability to look at a student, at a musician, instead of looking at the background. … He has such a global sense of what teaching means in that capacity.”

The cultural collisions are intentional, Gutiérrez said. He cited Israeli conductor Daniel Barenboim, who, with the late Palestinian writer Edward Said, formed the West-Eastern Divan Orchestra in 1999 as a way to address the Israeli-Palestinian conflict.

“They respect each other,” Gutiérrez said of Barenboim’s musicians. “They are talking with their souls and forget about political difference. … As human beings, there is more that we have in common than what we disagree with.”