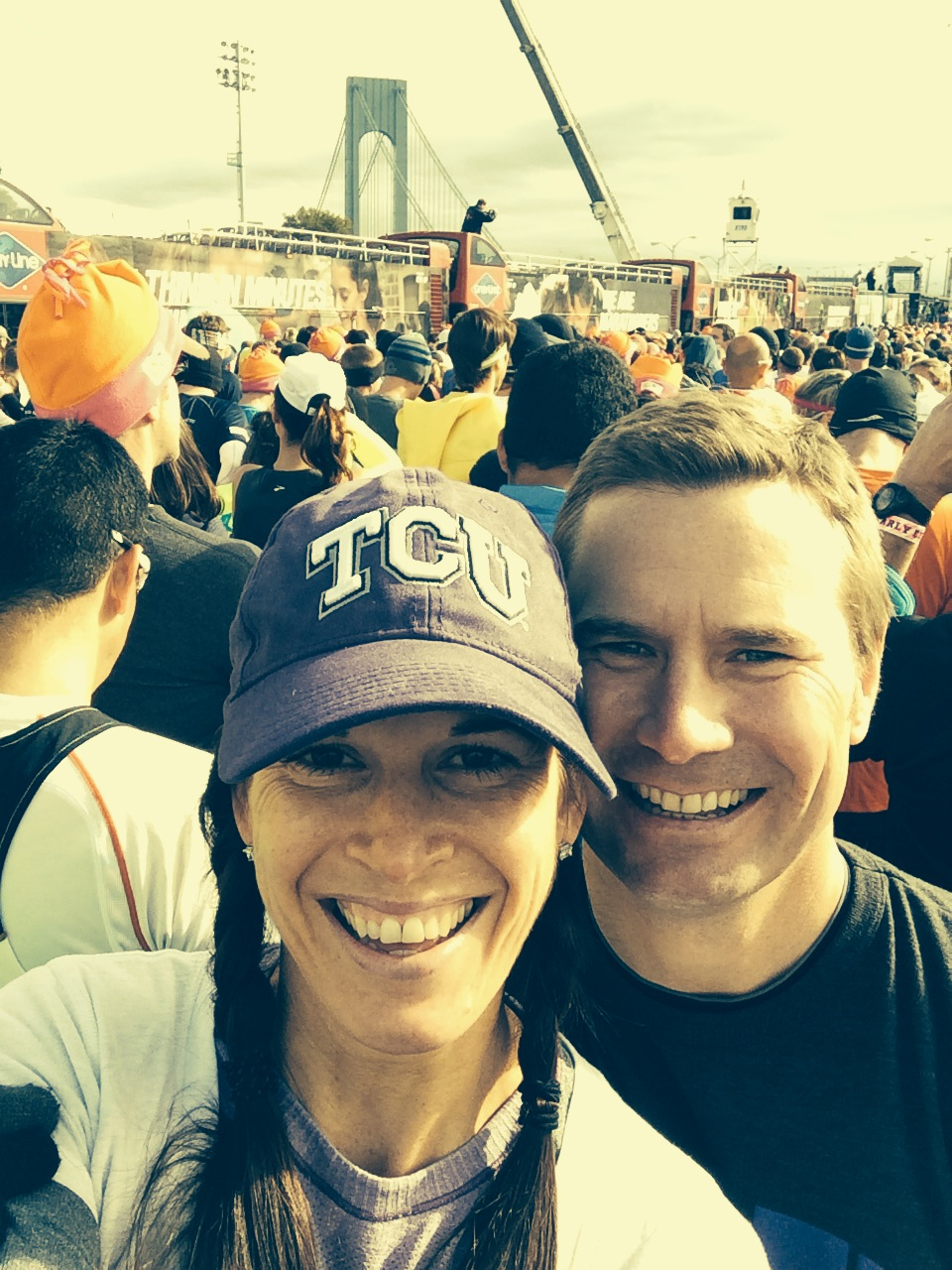 Shannon King Cave ’95 and husband Jonah take a photo before the start of The 2013 New York City Marathon, which they ran in honor of her TCU roommate Betsy Anne Clement, who passed away their freshman year.

Shannon King Cave ’95 and Betsy Anne Clement grew up together as best friends in the Spring Branch area of Houston. They went to the same schools, shared the same clothes and whispered similar dreams. Even their parents were friends.

Despite Clement moving away during her junior high school years, the pair dreamt of going to college together and being roommates. And so they were, ending up together at TCU in the fall of 1991, pledging Kappa Kappa Gamma and living in Colby Hall.

Then tragedy struck in November of their freshman year. Clement had gone to see Cave in a play and gone out to celebrate with her afterward. She accepted a ride back to campus but never made it home. A car accident on University Drive killed Clement and another student.

It began a life of tribute to her friend. At Cave’s wedding, friends carried Gerbera daisies – Clement’s favorite flower. Later, she and husband Jonah purchased a pipe for their church’s organ in Clement’s honor. In New York City, where they live, the couple sponsors a teacher through The Go Project, an educational charity that runs an academic enhancement program for public school children in lower Manhattan who are at academic risk. (Betsy was an education major.) In 2002, when Cave gave birth to a daughter, her first child, she named her Betsy.

Last year, Clement would have turned 40. Wanting to do something special, Cave began training for The New York City Marathon. She shared her plans at the Kappa Kappa Gamma Founders Dinner, and many sorority sisters agreed to help her in fundraising efforts.

Cave hoped the endeavor would yield $15,000 in scholarship money. Friends, family and fellow Frogs helped push the total to more than $18,000.

Then Hurricane Sandy flooded the Big Apple and washed out the race.

Undeterred, Cave decided all the training and donations should be carried over to the following year’s marathon in 2013.

Earlier this month, the Caves followed through on the tribute to Clement, donning “This One’s For Betsy” t-shirts, given to them by some Fort Worth friends. The couple held hands for the last mile, crossing the finish line in 3 hours, 47 minutes.

“It was an amazing experience,” Cave said. “People along the route would see the TCU on our shirts and yell out, ‘Go Frogs!’ ”

The fundraising would continue too, and the tribute tally would climb to $23,785, which goes to the Betsy Clement Memorial Scholarship at TCU, created by her parents.

“I think Betsy would have loved it,” Cave said weeks after the race. “The fact that we had a setback and kept on going would have made her prouder still. She loved to live life to the fullest. She wasn’t afraid. Her smile would light up a room and she just made the world a better place.”

Cave sensed her friend was with her, especially when the marathon started taking a toll on her body.

“It was an incredible experience. Wearing a shirt with my alma mater on it and hearing strangers in the crowd cheer for TCU was exhilarating. But best of all, I had Betsy’s name on my back. I know it was a fundraiser in her memory, but it was almost like she was giving me a push.”
To help:
Contribute to the Betsy Clement Memorial Scholarship by contacting Samantha Suttle at 817-257-5726 or c.s.suttle@tcu.edu. Or make a donation through Cave’s CrowdRise site: