Mike Cocanower ’04 and his company Inside Image Design do more than light parties. They create magic. 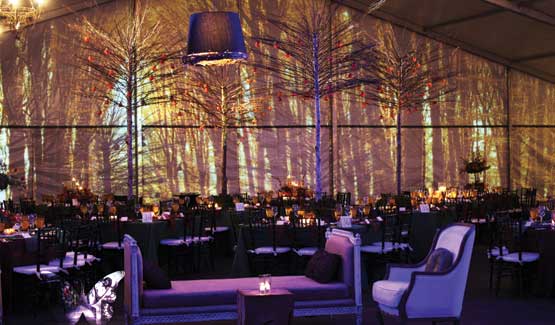 Fort Worth-based Inside Image Design created a wooded backdrop with amber daylight glow for this March of Dimes party. The company was started by Mike Cocanower ’04 (below).

Mike Cocanower ’04 and his company Inside Image Design do more than light parties. They create magic.

In the center of the Worthington Renaissance Hotel’s grand ballroom floats a 12-foot-by-12-foot-by-12-foot cube created by six projectors, six plasma televisions, computer software and other gear. A foot off the carpet, it pulses with live, fractalized visualizations of electronica music coursing from the house speakers.

It’s 2009 and Marriott International is hosting a client appreciation event, presenting their Renaissance brand as an edgy fit for young professionals interested in nightlife. The creator of their centerpiece cube is Mike Cocanower ’04.

Cocanower is more than a lighting designer. He creates magic-like environments for people to experience at events. With his company Inside Image Design, the 31-year-old Fort Worth native has created environments for boxing matches at North Texas convention centers, car dealership openings, the 2012 Freshman Orientation dance at TCU, the Texas Ballet Theater 2012 Gala, weddings, and more.
“When I was really young,” Cocanower says, “I tried to understand how I was going to create these things that I had in my head. It just seemed like magic to me — people creating things with technology. It’s taken me years to figure out how it all works.”

At TCU, Cocanower studied printmaking and chemistry as he worked toward his unique combination of art and technology. Since then, he’s picked up tricks at Burning Man and in the Dallas underground art scene. He’s learned to use Chuvet color tubes, tricolor LEDs, different control systems (his favorite is a Hog3PC), MIDI interfaces, wireless devices, software to map digital projections, and a great deal of other equipment.

To evoke emotion with his high-tech tools, he incorporates into many of his pieces an element of surprise. In 2011, March of Dimes set its Fort Worth Signature Chefs auction in a nondescript barn. But Cocanower spoke with the organization about animating their sunset theme. The evening of the auction, guests were surrounded by the amber, daylight glow from the 40-plus LEDs he’d hidden in trees and on the ceiling.

Once the family whom the nonprofit had helped came onto the stage to share their experience, the light slowly faded: orange, then red, then purple. The light dropped to a night blue, and his aleko fixtures switched on, sprinkling the walls with stars: the sunset was complete.

“Art takes people out of the mundane,” Cocanower says. “Creativity is freeing, whether it’s something traditional or something that’s been created with technology. Art starts people thinking about their own lives; it inspires their own creativity. It gives them a sense of wonder.”