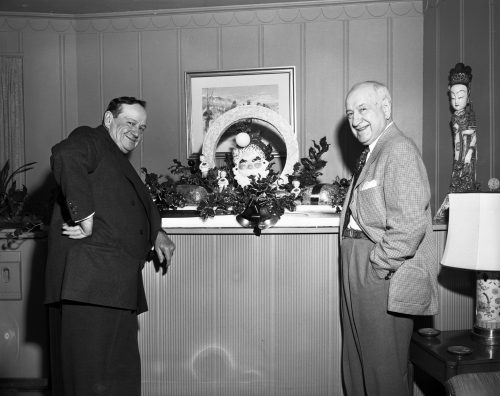 Sid Richardson, left, was an oil wildcatter with a keen talent for making deals. Courtesy, Special Collections, The University of Texas at Arlington Libraries

The man for whom TCU’s Sid W. Richardson Physical Sciences Building is named was an oil wildcatter whose cattleman father taught him early how to make deals. Annie Richardson Bass, his sister, was a civic leader and advocate for women’s education. Her name adorns the building that houses the Harris College of Nursing & Health Sciences.

Neither attended TCU, but how their names came to be there reflects the intertwining of Fort Worth history.

Sid Richardson was particularly close with Annie, his older sister. As siblings do, the two occasionally fought: Once on a train to California, he changed his ticket midtrip so he could get out of sharing a car with her. He also bought two DC-3 planes so he wouldn’t be forced to fly with her.

But the relationship between Richardson and his sister’s husband, E.P. “Doc” Bass, proved life-altering. In his late teens, Richardson was driving a buggy that overturned and crushed one of his legs below the knee. Doctors wanted to amputate, but Bass persuaded surgeons against that. Author Bryan Burrough, in The Big Rich: The Rise and Fall of the Greatest Texas Oil Fortunes (Penguin Press, 2009), quotes Richardson as saying: “I practiced me a walk that wouldn’t make me limp. … That swingin’ walk of mine is my own invention.”

Doc Bass also steered Richardson toward becoming an oilman. Richardson worked his way up from a laborer who hauled pipe and shoveled coal to an oil scout to president of his own companies.

Widely regarded as one of the great oil tycoons in Texas history, Richardson amassed a fortune through Sid Richardson Gasoline Co., Sid Richardson Carbon Co. and Sid W. Richardson Inc. Throughout the 1920s and 1930s, Richardson began to shape what would become a Fort Worth dynasty.

As Richardson’s fortune grew, he began a private art collection. He was particularly interested in Western art by Frederic Remington and Charles M. Russell. Today, his personal collection is displayed in Fort Worth’s Sid Richardson Museum, which opened in 2006. Annie Richardson Bass and her husband had one son, Perry, born in 1914. Richardson spent time with his nephew riding horses and took him under his wing after Doc Bass died in 1933.

The bachelor Richardson lived in the Fort Worth Club for decades. His sister moved into an adjoining suite.

The oilman asked his nephew, by then a Yale graduate, to build him a house on St. José Island, just off Corpus Christi, Texas. Richardson also made Perry Bass a 25 percent partner in his oil business.

Perry Bass became the director of the Sid W. Richardson Foundation. He had four children and named one Sid for his uncle. Sid Bass married philanthropist and art collector Anne Hendricks.

Just as Richardson and his sister lived in hotel suites by each other for so many years, the buildings etched with their names at TCU are mere paces away from each other on West Bowie Street.

The Sid W. Richardson Foundation largely funded the buildings. TCU is not unique in facilities named after the oilman. At least 10 colleges and universities in Texas, including Rice University, the University of Texas at Austin and Baylor University, have a building or college named Sid Richardson.

At TCU, the prominent Sid W. Richardson Physical Sciences Building is well-known to students. Directly south of the library, the building holds the largest lecture halls on campus, along with science labs and offices for the College of Science & Engineering. The building’s numerous hallways and twisting staircases are notorious among students for being tricky to navigate — so much so that “Got Lost in Sid Rich” was one of the squares on a student bingo card that circulated on social media.

The $7.6 million building includes a conjoining section with the newly remodeled Winton-Scott Hall. The Sid W. Richardson Physical Sciences Building more than tripled the university’s space for science research and instruction. But many people criticized the brutalist design, calling it a “drastic, unnecessary departure from traditional TCU style.” At the 1968 cornerstone laying ceremony, architect Paul Rudolph addressed the controversy by saying, “I know of no other campus which has attempted to house the best sciences in what is, hopefully, a work of art.”

Perry Bass also spoke at the cornerstone ceremony. He said the building fulfilled Richardson’s promise to do “something significant” for TCU. The Annie Richardson Bass Building expanded in August 2014 to include an additional 33,000 square feet with new faculty and staff offices and high-tech classrooms for the Harris College of Nursing & Health Sciences, the School of Nurse Anesthesia and the departments of Social Work and Nutritional Sciences.

The Sid W. Richardson and Annie Richardson Bass buildings ensure that the family’s legacy will live on, shaping the education of TCU students for years to come.