Topics: Alumni, Schieffer College of Communication, What I Learned Since Graduation The oldest of three siblings, Angelia “Angie” Coffman Holbrook ’91 saw ROTC as a good means to pay for college without burdening her parents. Both of her grandfathers were retired U.S. Army soldiers, and she said she liked the respect and noble causes the military represented.

“At that time I didn’t know I would come right on active duty and spend the next 27 years of my life doing it,” she said of her career in the Army. “It was a vehicle in the beginning, but it became a passion as I went forward.”

The Little Rock, Arkansas, native wanted to spread her wings a bit by going to college in Texas. TCU seemed just the right size. “A lot of things came together to make it the perfect opportunity for me,” she said. “I got to play on the varsity soccer team as a walk-on. I was a news editor at the TCU Daily Skiff. And the ROTC program really set me up for success when I came on active duty right as Desert Storm was taking off.”

After serving the four years her scholarship required and earning a bachelor’s in journalism—news editorial, Holbrook decided to remain enlisted.

“The people are just amazing. The privilege of leading sons and daughters is very near and dear to my heart. That’s probably what kept me in,” she said. “I drew a lot of strength from getting to lead them.”

During her military career, Holbrook achieved the rank of colonel, commanded at battalion and brigade levels, served two combat tours in Iraq, and earned two Legion of Merit awards, two Bronze Stars and other honors.

She most recently served as garrison commander at Fort Belvoir in Virginia, a base with more than 50,000 employees, but her favorite post was as battalion commander at Texas’ Fort Hood from 2012 to 2013, where she led about 1,400 soldiers.

“We were a special troops battalion, so we could be pulled into any kind of mission,” she said. “My focus was on the development of young officers. Being part of investing in the next generation of leaders was one of the most gratifying things I got to do in service.”

After retiring on Jan. 3, Holbrook took a position with a defense contracting firm in Virginia. As she reflected on her military career, she shared some of the life lessons she learned in times of war and in times of peace. 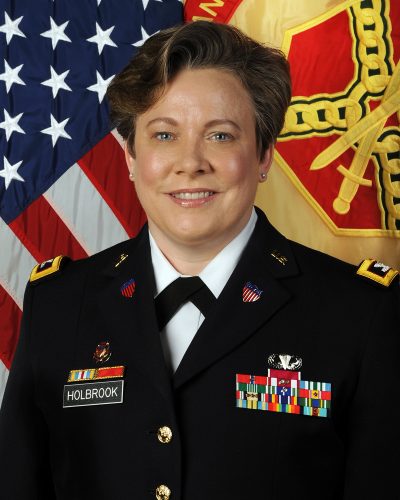 One of the biggest things I’ve taken from the service is that how I spend my time equates to what value I assign to things. I can talk a good game, but if I’m not actually scheduling time on my calendar to do these things, then it’s just talk. Leading up to one of my commands, we did an exercise where we had to list out our values and then take out our calendar to see how we actually spend our time. It was really telling for me.

It’s important that you learn how to listen. The Army has a lot of type-A folks and go-getters. As a young officer I just wanted to go charge the hill instead of listening to counsel. Fortunately, I had a lot of good leaders who took my strong points and helped me with my weaknesses. I learned to listen to all the conversations at the table. You need to talk less so you can hear more. It’s not waiting for your turn to talk — it’s really listening and hearing what they’re saying and picking up nonverbal cues. That’s still a work in progress for me.

You can’t be the Lone Ranger as a leader and be effective. You need to give people boundaries and then let them employ their skills. When I took over an organization, I would share my 10 guiding principles and say, “If you adhere to these, we’ll all be on the same sheet of music and get where we need to go.”

Take personal responsibility. Own your choices.

There’s always a way. Persistence is the secret sauce to reaching success. Angelia Holbrook learned many lessons through her 27 years in the military, including the realization that leading others is harder than it looks. Courtesy of Angelia Holbrook

Make time for white space daily. If you load your calendar up every hour of the day, you know what’s going to happen — you’re going to start running late and somebody’s not going to get their due. You have no flex. So when crises arise, you’re overscheduled and don’t have the ability to step back away from the problem and address it in a thoughtful way. You need to take time to read, think strategically or just take some deep breaths.

Vulnerability is not a weakness. When we are transparent with our vulnerabilities we give ourselves space to grow. It also makes people want to work with you. Being willing to put it all out there and say, “Here’s where I’m struggling,” or, “I’m not quite understanding the situation. Can you help me?” has always aided me in connecting with others. Millennials and those who come after are a little bit more willing to say they need help. I think that’s going to be one of their greatest strengths.

My words have meaning. The use of “we” and “us” has to be greater than the use of “I” and “me.” Whether we are getting ready to do a mission or it’s standard day-to-day business, I have to remember that I can’t do it by myself. It’s a collective group of people pointed at an objective. When I’m hiring, during the interview process I listen very intently to how often someone uses “I” and “me” versus “we” and “us.” It’s been a very good barometer for team players versus superstars who are kind of out there by themselves.

Leading others is a lot harder than it looks. Play to your strengths. Make sure you’re not trying to emulate someone else’s leadership style. The people you are leading know right away whether you’re faking it or not, so you might as well lead from your strong suit. When determining discipline for subordinates, understand the difference between mistakes and misconduct. That’s not something they teach you in school. Sometimes you can get so focused on the mission that you forget that people are still learning and developing. Before you react, think about what their intent was and start from a place of trust. Usually the intent is righteous; maybe we just need to work on their approach. If we don’t crucify them but look at it as a learning opportunity, they’re more apt to respond better next time they’re in that situation.

Celebrate the little victories. We can really get worn down by the pace, especially when we’re going nonstop. Do a little ceremony for a promotion or if someone is getting an award. I always try to make a big deal out of that and make it special for that person.

Network, network, network. Networks work. It’s all about the relationships. When I was getting ready to retire, one of my old bosses called me and said he wanted me to come work for him. When he goes looking for people, he goes back to his Rolodex of people he could count on when he was in service. So your reputation and relationships can be catapults to get you where you want to go, both professionally and personally.