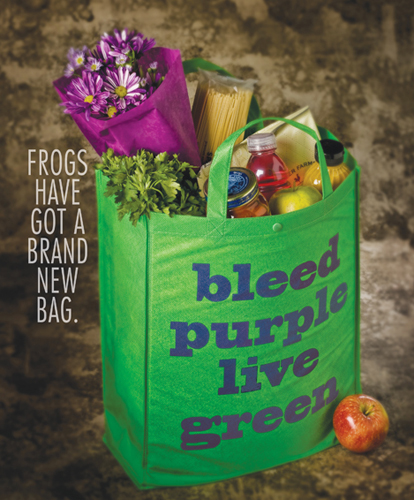 TCU has long been associated with purple, but in recent years the university has embraced green in a big way — and was rewarded in April for its efforts with inclusion into The Princeton Review’s Guide to 311 Green Colleges, 2011 Edition.

More than 2,000 colleges were reviewed for their environmentally responsible practices, from which the magazine’s editors and their partners at the U.S. Green Building Council selected the 311 best in the nation.

TCU began many of its “green” practices in the 1990s in an effort to reduce energy use, maximize efficiency and save money.

Five of TCU’s campus buildings meet Leadership in Environmental and Energy Design (LEED) gold standards, and two others are at the silver level.

Additionally, TCU students are directly involved in the school’s “green” accounting, which is one of the requirements of the American College and University President’s Climate Commitment in 2008 that Chancellor Victor J. Boschini Jr. signed in 1998.

Last fall, the TCU Energy Institute was given a 2010 Honda Civic GX — dubbed the Frogmobile — that is solely powered by natural gas and has emissions that are 30 percent cleaner than gas-powered vehicles. The car was a gift from select members of the Energy Institute’s Metroplex NGV Consortium, a group of nearly 60 companies dedicated to increasing the use of NGVs through education and research.

On the Web:
Read more about TCU’s “green-ness”