Department wins the General Douglas MacArthur Award as one of the top eight programs in the United States and commissions a record crop of lieutenants. 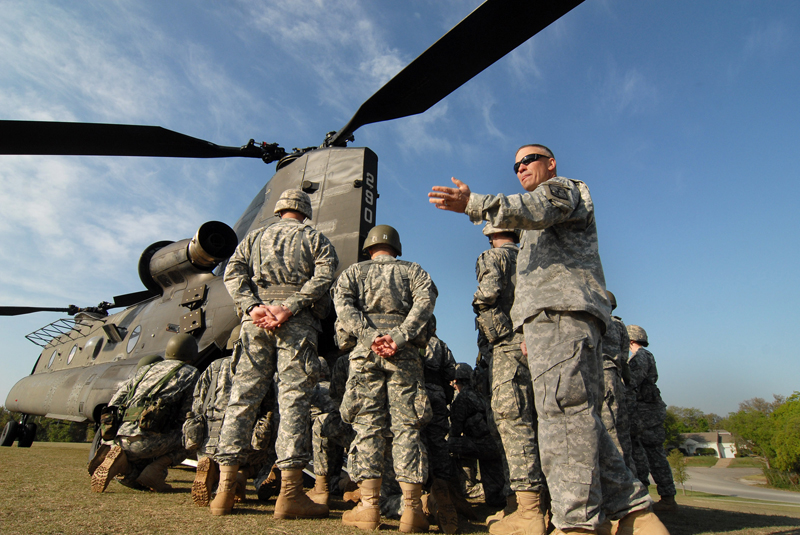 Department wins the General Douglas MacArthur Award as one of the top eight programs in the United States and commissions a record crop of lieutenants.

The Boeing CH-47 Chinook is a workhorse.

Since the 1960s, the twin-engine, tandem rotor heavy-lift helicopter has deployed America’s troops in Vietnam, Iraq, Afghanistan and other battlefields. With its wide cargo bay, it is also the ideal aircraft for rescue and humanitarian missions, including scores of hurricane relief jobs, fire fighting duty, food distribution and fuel transport. Three Chinooks were recently used to cool Reactors 3 and 4 of Japan’s Fukushima Nuclear power plant with seawater after recent earthquakes and tsunami.

In March, 30 cadets from TCU’s Reserve Officers’ Training Corps program rode one to Fort Hood, Texas, for three days of military training as part of the biannual field training exercises.

“These freshmen and sophomores are fortunate to get to experience this opportunity,” said Lt. Col. Chris Talcott, chair of the military science department and TCU’s ranking ROTC professor. “The rest of our cadets are taking a 2 1/2 hour bus ride. So needless to say, this is pretty special.”

The “lucky 30,” as Talcott called them, assembled in the early morning for regular physical training and then greeted the Chinook as it landed in a field north of Lupton Stadium on the campus’s west side.

Helmets and fatigues strapped on, the cadets huddled just outside the rear cargo hatch as Col. Frank Y. Rangel, Jr. of Fort Hood presented a tutorial on the Chinook’s capabilities.

“Top speed is 170 knots, fastest in the military,” Rangel said. “It will smoke a Blackhawk.”

The Chinook is also the Army’s safest aircraft, he said, although it requires 10 times as much maintenance. The helicopter’s three hooks underneath can haul up to 2,000 pounds of water, which is useful in containing fires. During the winter’s ice storms, a Chinook functioned as a mobile gas station, transporting fuel to the Amarillo area.

Rangel also described what the cadets could expect once they touched down at the Army post in central Texas.

“You will exit the vehicle quickly at a near 90 degree angle and fall in position,” he instructed. “Left side first, single-file line.”

Cadets practiced the maneuver a half-dozen times before cramming in ear plugs for the real thing.

Field exercises are a testing ground. Cadets will be transported to one of Fort Hood’s training areas, dropped off and left for three days – essentially, a practice air assault. Over the weekend, they’ll face military tasks to assess leadership, decision-making and teamwork skills.

“They’re going to land quick, get out and get down,” Talcott said. “It’s like a pretend war.”

Classwork, girlfriends, boyfriends, parents all will have to wait til Sunday.

The helicopter ride is a bonus. Talcott says the program views it as a retainment tool.

“A lot of what we do is very difficult,” he said. “We get up at 6 for PT [physical training] four days a week. They take extra classes on top of their normal university workload. Many of them are involved with fraternities or sororities or other campus organizations. The ‘military stuff’ is the cool, exciting part. We use it – especially for the freshmen and sophomores – to keep them invested in the program.”

TCU’s ROTC program is among the nation’s best. In February, it was honored with the General Douglas MacArthur Award as one of the top eight programs in the United States. The 305-cadet unit, which includes students from Texas Wesleyan, Baylor, North Texas, Columbia College, Tarrant County College and Weatherford College, make it one of the country’s largest units. About 150 are from TCU.

In May, the program commissioned 35 lieutenants, a TCU record.