TCU football coach Gary Patterson discusses the mathematics of fourth down – as he sees it. 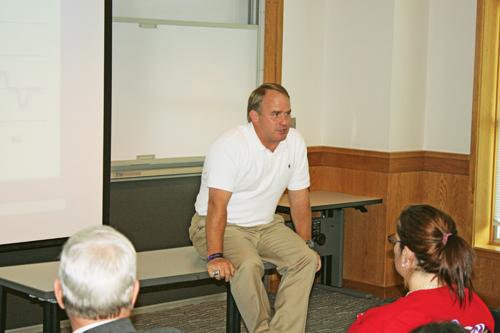 TCU football coach Gary Patterson discusses the mathematics of fourth down – as he sees it.

When it’s fourth and short in a tight game, seasoned football coaches rely on their years of experience to make the call.

Mathematicians get out their calculators.

In 2002, California economist David Romer created a sensation when he crunched the numbers from more than 700 NFL games to determine the statistical probability of teams making it on fourth down. He found was that by relying on their gut, many coaches probably played it too safe. Just looking at the numbers, he found coaches were better off going for it most of the time.

Efton Park, professor of mathematics, thought the study could provide fodder for an interesting discussion.

“I love math and I love football, so I thought why not bring them together,” he says.

Park’s wife Rhonda Hatcher, associate professor of mathematics, sits on the TCU Athletic Council where she got to know head coach Gary Patterson. She suggested bringing in the coach to discuss whether Romer’s theory added up.

“I knew it would be a big draw if we could get him to participate,” Park says. “He graciously agreed.”

So on April 13, Patterson and Park addressed a crowded room in the Tucker Technology Building. Park examined when it was mathematically best to punt, kick a field goal or go for a first down, depending on the line of scrimmage in a football game, all based on Romer’s research, which is explained in depth on advancednflstats.com.

After Park’s presentation, Patterson agreed that math does play a role on the sidelines.

“We use statistics all the time,” Patterson said in a story of the lecture by the TCU Daily Skiff. “Football is the same as any other business. We use computers, and we use numbers. We run [numbers] to find out if there are any advantages.”

But the coach also said other factors come into play, like the experience level of his players, the timing in the game and momentum.
“Some games you have to take more chances for an opportunity,” Patterson added.

Students said the lecture definitely had a ‘wow’ factor.

“I’m a football fan so I thought it was really interesting,” said math junior Daniel Shedd. “Anyone who watches football can tell you that making the decision on fourth down isn’t just about the math, obviously there are many other factors involved. But it was entertaining.”