The 164-member Froggie Moms Club in Houston began as an attempt for TCU parents to get connected. Now, the group is planning social outings and bringing in thousands of scholarship dollars. 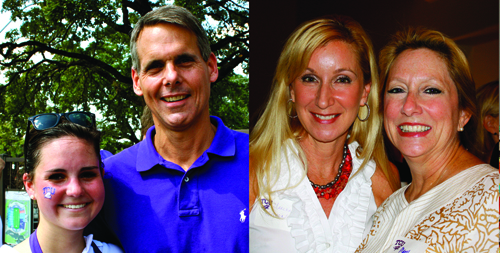 Parents in the Froggie Moms Club of Houston helped raise four $1,500 scholarships for TCU students in 2010.

The 164-member Froggie Moms Club in Houston began as an attempt for TCU parents to get connected. Now, the group is planning social outings and bringing in thousands of scholarship dollars.

But they didn’t really feel connected to the other parents, so mom Marilyn McDowell changed that. She contacted other Frog moms in the area, and by January 2006, the Froggie Moms Club of Houston held its first meeting.

“It just kind of mushroomed on its own and took a life of its own,” said McDowell.

Ann Johnson Wooldridge ’84, current president, has been a member from the beginning. She and husband John Wooldridge ’80 have three Frogs — a graduate, a senior, a sophomore — and a high school sophomore.

“The mission is to promote and support awareness of TCU in the Houston area,” Wooldridge said.

Froggie Moms has 164 members. The fun begins in May with a freshman mom orientation that includes a Q&A with moms who have kids in sororities and fraternities, tips from The Container Store and a resource directory of places Froggie Moms would recommend — from dry cleaners to doctors.

“This makes the parent’s life a little easier to have the resource book available,” McDowell said.

Social events this year included a bus trip to Marburger Farm Antique Show in Round Top, a couples’ wine-tasting party and a painting social. They also have “finals survival package” packing parties.

The group’s biggest accomplishments, however, are its scholarships.“We’ve given scholarship money every year we’ve been in operation,” McDowell said.

But the group is also a boon to the moms, especially moms of freshmen. “I think when you move from high school — when you’re so in touch with your child and the school — it’s hard, and this kind of keeps the moms feeling like, ‘OK, I kind of know what’s going on and know what to expect,’” Wooldridge says. “I think that’s really helpful for freshmen moms sending their babies away.”

In addition to the Houston Froggie Moms, there are Parent Clubs formed or forming in Austin, San Antonio and Oklahoma City. “Houston’s Froggie Moms, or any city’s Parent Club, adds enthusiasm, positive support and energy in the local community which ultimately benefits the university as a whole,” says Kay Higgins, TCU’s associate dean of student development and director of Parent Programs.

“In the case of Houston’s Froggie Moms the scholarships, in particular, have allowed four Houston students to attend TCU with lessened financial difficulty.”