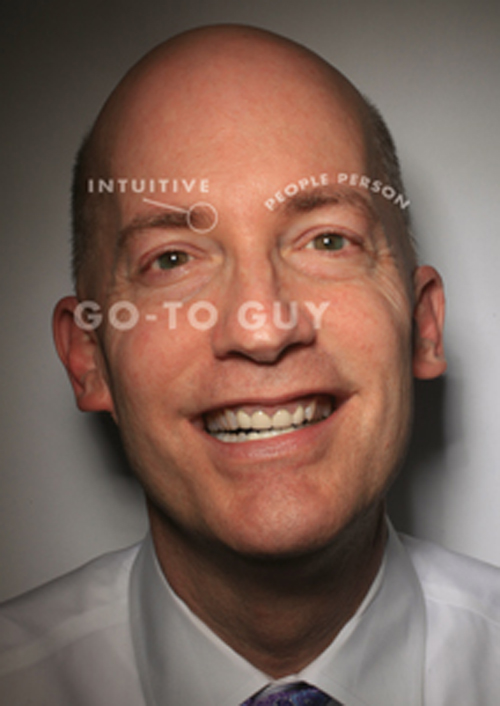 He is brilliant as shown by both his ears and his forehead. His dominant forehead belongs to a person good with logic, theory and planning; he can take on problems that might overwhelm others.

The vertical access hairs at the start of his right eyebrow reveal an intuitive intelligence, a capacity for tapping into his internal pattern recognition to know quickly if something is going to work or not. He would call it trusting his gut.

Small ears say he is visual and takes in information best when he sees it. They also indicate that in his experience, most things usually work out better when he does it his way.

Close-set cheeks and small ears say that he has limited patience with people who are stalling or dragging things out. The cheeks also make him the go-to guy. In a crisis or on a deadline he can kick it into high gear and run circles around most people.

Visionary eyebrows also show he is good at seeing potential. Low ears and high eyebrows are the mark of a strategist who is good with long-range planning and goals. But low ears say he will not be rushed into a decision; it needs to feel right.

Abundant eyelids and round eyebrows are the mark of a people person. His eyelids make him approachable and reveal his capacity for making lasting connections with people. These eyelids also mark his loyalty in relationships. The round eyebrows tell me he puts people first and is compassionate.

His broad nose indicates that he is a natural provider and those under his umbrella of support are covered for life. Large nostrils announce that he is generous to a fault with those he bonds or connects with.

This same personality characteristic is echoed by the fact that when he smiles his gums show, revealing a person whose approach in relationships is not, “what can I take?” but rather, “what can I give?”

Boschini’s reaction to Fulfer’s analysis:
“I went into the whole “process” with a very skeptical attitude……until I sat and watched him as he read the faces of several couples I knew.  These were people I knew fairly well.  In every case I felt like he was right on target.  He definitely made a believer out of me.”