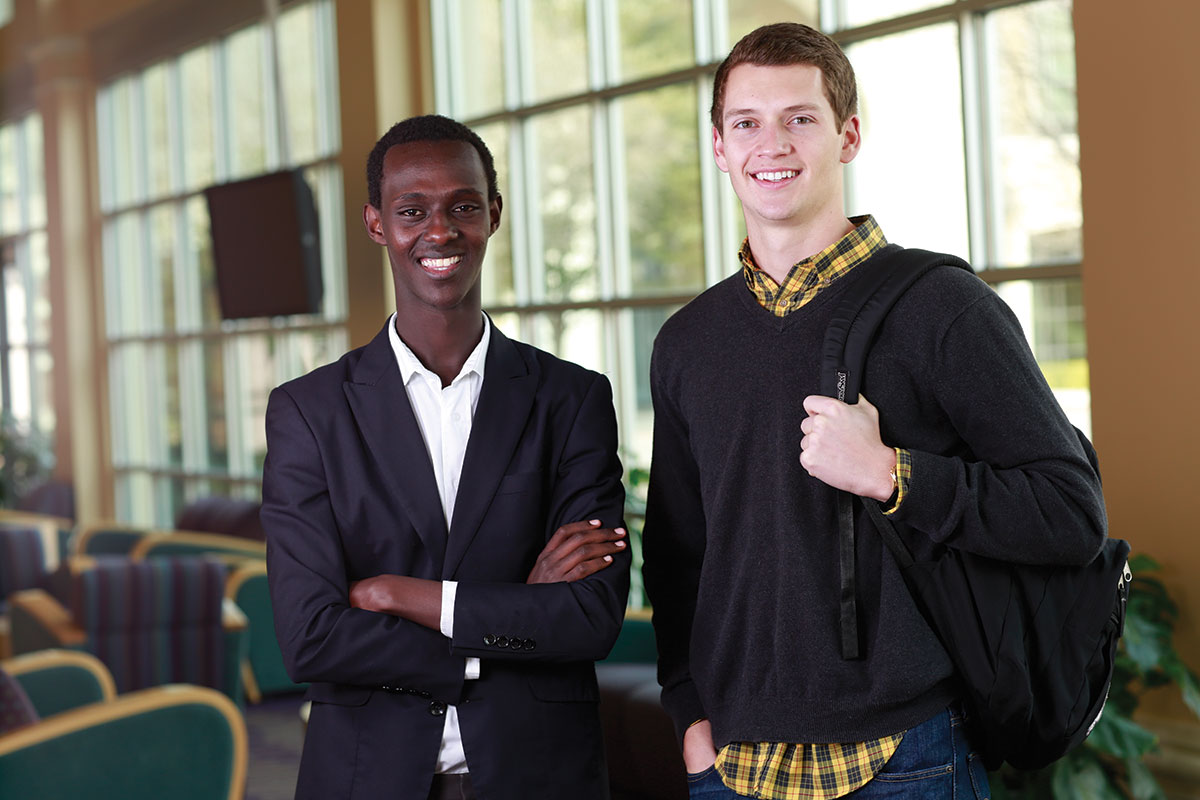 In April 1994, Yannick Tona was 4-years-old, hiding in a bush, trying not to be killed.

His family had gathered at his grandmother’s house in the southern Rwandan town of Butare. They wanted to face whatever was coming together, and the militia was getting closer.

They heard the screams of people running down the street, fleeing the men and their machetes.

“We decided to divide up,” Tona says. “I went with my mother. My sister went with my uncle, and my younger brother went with my grandmother. We hid in a school. Then my mom learned that they were going to come kill that night in the school so we left. That night, most people in that school were killed. We hid in bushes. We survived.”

Tona lost more than 80 members of his family during the Rwandan genocide, a three month-period from April to July 1994 when government-backed extremist Hutus called for the mass slaughter of Tutsis and moderate Hutus.

The ethnic conflict took a country that appeared unified by a common language and culture and turned it into a bloodbath, pitting neighbor against neighbor, husband against wife and parent against child. Nearly 1 million Rwandans – 20 percent of the population – perished.
Tona and his mother walked for three weeks, without food, to neighboring Congo. By mid-July, a peace agreement ended the killings, and mother and son returned to Rwanda.

“I remember asking my mother, ‘Why are we going back to a country that tried to kill you?’ But people are passionate about their country,” he says. “She wanted to come back home and help.”

“I wanted to discover why this happened. I was a kid, and I didn’t understand. The more I learned, the more I hated people. These were people I had grown up with. People who were close to my family; people I knew.

“Then one day I discovered: Hating people doesn’t really do anything about it. I want to make a difference. If I’m going to be different from these people, then I have to do something.”

Since that realization, Tona has been on a mission to promote global understanding by connecting young people across cultures, serving on the boards of different youth organizations in Rwanda, Canada and the United States. He gives frequent talks, speaking around the world, about his experience to encourage action against genocide, discrimination and bullying.

Tona entered TCU’s Intensive English Program (IEP) in 2012 so he could hone his English skills and take his message to a wider global audience. He was the first recipient of TCU’s Carl and Teresa Wilkens scholarship to support rebuilding efforts and English education in Rwanda. The scholarship, made possible by the Office of Scholarships and Financial Aid, was named after the American couple who aided Rwandans in hiding during the genocide.

Kurk Gayle, director of the Intensive English Program, decided to enlist other students to help Tona make the adjustment to American campus life. He helped form the Rwandan Student Committee to provide a support system for Tona and future scholarship recipients. Zack Siegert, who had come to TCU from Castle Rock, Colo., was among the recruits.

“We got to meet Yannick and heard his story,” Siegert says. “We were just there as a resource for him to take him to lunch or learn how to operate the washer-dryer, just basic things like that.”

The two young men hung out a few times, and Siegert helped set up a speaking event featuring Tona in December 2012. After that event, Tona asked the Colorado native: “Do you want to come to Rwanda?”

Siegert loved traveling and was planning to spend the 2013 spring semester in Seville, Spain, through TCU Study Abroad.

“I said sure,” Siegert recalls. “I’ve always wanted to expand my horizons, continue traveling to new places, especially after working with him. He said, ‘OK, if you’re serious about it, let me know.’ ”

Why did Tona make the offer?

“After I see all TCU has done for me, the great experience I’ve had, the scholarship, I was interested in what I could do to give back,” he says.

While studying in Spain, Siegert followed up with Tona. He told him that he really wanted to visit Rwanda but not just as a tourist. Together they developed a plan: Siegert would stay with Tona and his family in the capital city of Kigali for a month. During the first week, the young American would work in an orphanage on the outskirts of the city, and then he would spend three weeks interning at a bank.

At the end of June 2013, Siegert arrived in Kigali. Tona helped his American friend buy a suit (as a native Rwandan he could negotiate a better deal in the markets) and introduced him to his family and neighbors.

“They all knew me, way before I ever knew them,” Siegert says. “I was the first Westerner to ever live in their neighborhood, so they’d come up the first week and say, ‘Are you OK? Are you supposed to be here?’ I’d say, ‘I’m fine; I’m with this family’ and they’d say, ‘Oh, I remember.’ They’d heard all about me, that was nice.”

Siegert loved the warm welcome he received from Rwandans and was surprised the capital city was so large and well-kept, but also noted some vast disparities.

“There was also a huge gap in what was developed and what was not,” he says. “I was sitting in my office in the fifth floor of this skyscraper, and I could see on the other side of this hill there were shacks on dirt and no running water.”

In high school, Siegert saw the film Hotel Rwanda, but he wanted to learn more about the genocide before his visit. On Tona’s recommendation, Siegert watched the documentary Ghosts of Rwanda, which details the genocide and the West’s slow response, and also read the book, Left to Tell: Discovering God Amidst the Rwandan Holocaust by Immaculee Illibagiza.

But nothing could prepare Siegert for his visit to the Kigali Genocide Memorial Center, which is built on a site where more than 250,000 people are buried. There he met with Yvonne Umugwaneza, a communication officer at the center who now is in the Intensive English Program at TCU.

“It almost feels like it could have been prevented,” Siegert says. “When you’re there and you come from a country that could have influenced the genocide, it’s very difficult to have that feeling and know it still occurred.”

But Siegert says Rwandans are more focused on the future than the past. “They love to talk about post-genocide development,” he says. “They’ll always be very positive, saying, ‘Look at how far we’ve come and look where we’re going.’”

During Siegert’s stay in Rwanda, he and Tona were busy with their duties and work during the day but reunited at night and talked about their experiences. By the end of the month, they were like brothers.

“We really didn’t know each other that well before, but now I’d consider (Tona) one of my very good friends,” Siegert says.

Back at TCU, Tona and Siegert are part of a group of students working to educate others about the Rwandan genocide.
On April 7, the 20th anniversary, the two friends will be among a group of 12 students traveling to Washington, D.C. to visit the Rwandan embassy and participate in events commemorating the ethnic atrocity.

In what’s being called “Commemorating to Change the World: A Virtual Voyage,” the TCU contingent plans to bring their experience to the classroom by using Skype to connect students in Washington to classes that are studying Rwanda and genocide in general this semester.

Also, Carl and Teresa Wilkens have offered to Skype in to campus from the capital of Rwanda as they attend events there marking the anniversary. The project is part of TCU’s Quality Enhancement Plan, or QEP, focused on providing international experiences and awareness of global issues.

Siegert says he hopes his fellow students will get involved in these and other events on campus and learn more about Rwanda and its people. He also hopes students will reach out to other international students and get to know them better.

“They are just like we were when we came to campus as freshmen, eager to meet people and share where they come from,”  he says. “The opportunity is there. It’s just a matter of taking advantage of it. That’s the key.”

Tona, who is working toward a degree in political science at TCU, hopes to one day become president of Rwanda. He has used opportunities on campus, such as the Vicente Fox Forum of World Leaders, to meet and question former heads of state.

He’s encouraged by his generation’s interest in global issues and their embrace of social media to be more politically engaged.

“In Rwanda, it can’t happen again, but globally I’m scared,” Tona says. “It looks like people don’t learn. The Holocaust happened and people said never again, but then we had the genocide in Rwanda. With the development of technology and a well-informed society, I feel, I hope that we never let something like this happen again.”

They may be separated by more than 8,000 miles, but TCU and Rwanda are growing closer every day. Kurk Gayle, director of TCU’s Intensive English Program (IEP), says the ties that stretch from campus to the east-central African nation, go back many years and involve people from all over campus. “I’m excited because this really