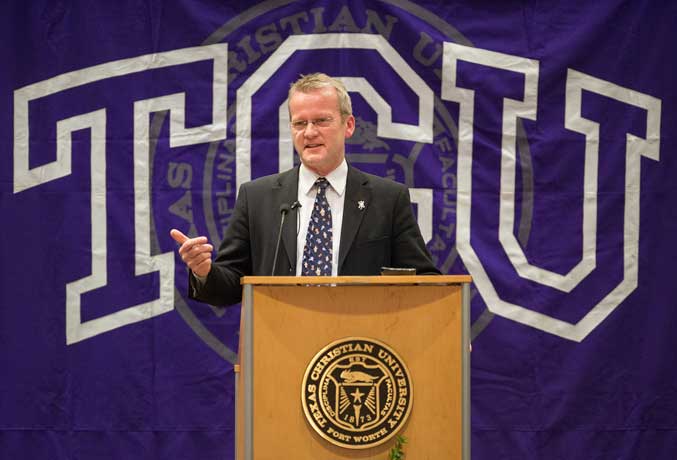 Finnish educator Pasi Sahlberg is director general of the Center for International Mobility and Cooperation in Helsinki. (Photography by Glen E. Ellman)

The key to improving education in the U.S. may be decreasing class time, handing out less homework and having fewer standardized tests.

That was one of the messages offered by Pasi Sahlberg, a Finnish educator and author who was on campus this week to stimulate a discussion rethinking education.

“If you teach kids less, they actually learn more,” says Pasi Sahlberg, director general of the Center for International Mobility and Cooperation in Helsinki.“It’s a paradox, but it’s something we have experienced in Finland.”

Over the last few decades, the Scandinavian country — perhaps best known for reindeers and saunas — has leapt atop the world rankings in student performance. The nation of 5.5 million managed the accomplishment while also delaying formal education until age 7, scorning all standardized testing until age 16 and keeping the school day to less than 6 hours — including 75 minutes of recess. The Finns also manage to spend around 30 percent less per student than the United States.

Sahlberg has become the face of Finnish education reform and has been featured in news outlets from Smithsonian magazine to The New York Times. He was on campus this week as the Cecil H. and Ida Green Honors Chair in the Department of Kinesiology and Harris College of Nursing & Health Sciences.

Sahlberg came to TCU thanks to Debbie Rhea, professor and associate dean for health sciences and research in Harris College of Nursing & Health Sciences, who recently returned from a sabbatical to Finland where she studied the nation’s educational strengths. She shadowed a program in Finland designed to offer a more focused educational experience in the classroom by adding 15 minutes of outside games and recess after each hour of classroom instruction. Rhea returned to Texas with passion to implement a simular structure in Texas schools and is working to establish pilot projects in several North Texas school districts.

On Wednesday night Sahlberg gave a lecture in the Brown-Lupton University Union ballroom and signed copies of his book Finnish Lessons: What can the world learn from educational reform in Finland?

His lecture detailed how education reforms launched about 40 years helped Finland enhance its educational system. He said the nation focused on providing equity for all students, from providing meals to children from lower-income families to making sure children with learning disabilities got the extra resources they needed to succeed.

He said the system also empowers local officials and teachers to design curriculums that meet the needs of each individual student instead of designing one curriculum everyone must follow.

“For our student assessments, we rely on teachers, we trust teachers,” he added.

Sahlberg said many Finnish primary schools don’t have homework at all, and if they do assign it, the time commitment is typically less than 30 minutes.

“I’m a strong believer in children’s playtime,” he said. “Play is a child’s job. You should give them time to play so they can learn what play means. For me, playtime is when you realize you have imagination, where you learn to create wonderful new ideas.

“This is the heart of the American spirit, to innovate, to create and design new things,” he said. “But if you are not allowing your children to have this playtime, to practice this play and to realize their imagination, then not everyone will be able to do this.”

He said some Asian countries have focused on lengthening the school day and drilling students to better perform on high-stakes tests. He pointed out that in South Korea, students typically go to school from 8 a.m. to 4 p.m. everyday then go to another school from 5 p.m. to midnight.

He said those students may post better test results on some academic measures, but that countries like the United States and Finland, which he noted was home to the creators of the popular “Angry Birds” video game, still have an edge in less measureable areas such as innovation and creativity.

“That’s where we can still be competitive, in creativity, in play, in using our imagination to invent and design new things,’” he said. “That’s where I think our hope is.”

In addition to fostering creativity, he said other countries could learn from Finland’s deep respect for educators. All teachers in Finland have to hold a master’s degrees and getting into the nation’s educational degree programs is just as, if not more, competitive than its law and business schools.

Sahlberg noted that his own niece, who graduated from high school with straight As and dreamed of being a teacher all her life, still couldn’t get into her desired college degree program at the University of Helsinki, which receives about 2,000 applications each year for 120 spots.

After spending a year as a teaching assistant, his niece was able to gain admission and is now about to graduate and become a primary school teacher, he added. But he contrasted the Finnish system with other nations struggling to fill teaching positions and keep its experienced teachers.

“What Finland is doing is keeping our teachers a long time and we have these great teachers with experience and passion for teaching and it makes a world of difference. That’s why we have a strong basis to do the things we are doing.”

He also said education shouldn’t be about competition and criticized high-stakes standardized testing.

“You are testing things too much,” he said of the United States’ obsession with standardized testing. “You need more focus on the well-being of children from early on and less on outside accountability that just brings more stress and anxiety.”
On the Web:
For more about Sahlberg’s research and writings, go to pasisahlberg.com.