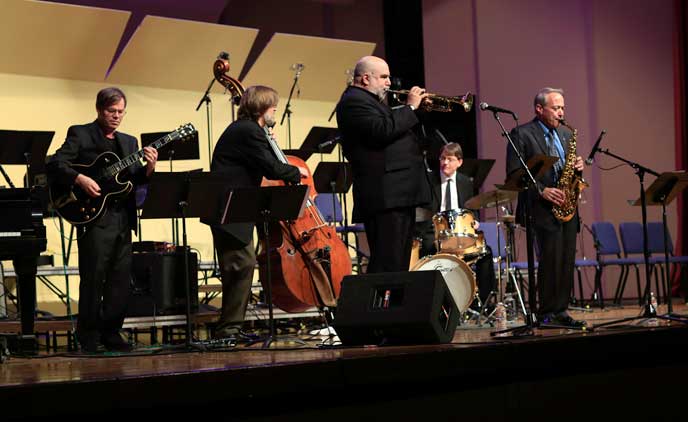 Trumpeter Randy Brecker has played with Sinatra, Springsteen and Zappa. In March, he jammed with the TCU Faculty Combo.

Brecker headlined as the featured artist of the 36th annual TCU Jazz Festival, belting out soulful sounds to a mix of genres – funk and swing to bebop and big band.

“He’s a tremendous talent who has been playing all over the country and world for four decades,” said Joe Eckert, director of jazz studies. “We were honored to have him here.”

By festival tradition, the TCU School of Music also welcomed a cadre of high school jazz bands and ensembles from across the state for competition and a first-hand look inside a premier college jazz studies program. The festival also serves as a recruiting tool for TCU.

Current TCU jazz musicians relished the weekend festival, too, performing for Brecker and receiving feedback from a music industry pro.

“As a jazz musician, just getting to hear this guy live is a once-in-a-lifetime thing,” sophomore music education major Jesse Rajabi told TCU360.