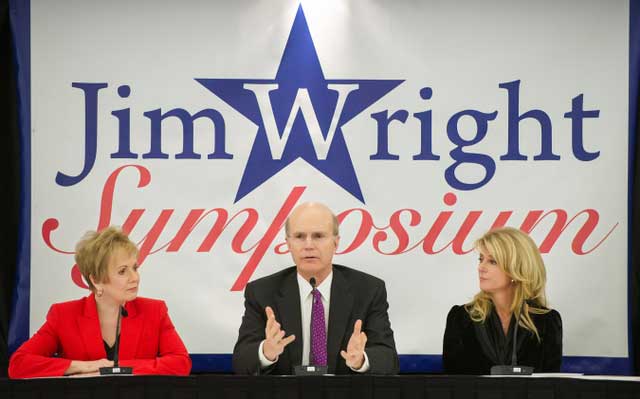 An inability to overcome party lines and form non-partisan relationships is creating more gridlock among national and state lawmakers, a panel of Tarrant County political leaders said in front of a crowd of nearly 300 at the 12th annual Jim Wright Symposium.

U.S. Rep. Kay Granger, Texas Sen. Wendy Davis ’90 and former U.S. Rep. Pete Geren all agreed that the contentious culture in Washington, D.C. and Austin is as sour and polarized as the public believes.

“The sad thing is that we elect people to find solutions to problems, but instead they’re looking for someone to blame,” said Granger, a Republican, who has served the 12th Congressional District since 1997. “In the days after 9/11, we came together as a nation, but we haven’t done that during the financial crisis.”

Granger, who served as Fort Worth’s mayor from 1991 to 1995 after two years on the City Council, recalled that during her years as a public servant at the city level, community leaders of both parties worked to solve problems rather than bicker, noting how the city was successful in steadying itself after the closing of Naval Air Station Fort Worth and reducing crime.

“Somehow we have to do that as a nation,” she said. “This is more a crisis of not coming together.”

Geren, who retired as a Democratic U.S. representative in 1996 when Granger won the seat, agreed.

“What’s happening today is tearing at the social and political fabric of this country,” said Geren, president of the Sid W. Richardson Foundation in Fort Worth and a former Democratic U.S. representative and secretary of the Army. “The ideological divide is greater than ever. I have always been a political optimist, but I’m concerned that the opportunity to find common ground with the current makeup” of officials is waning.

Granger, Davis and Geren all began their political careers in Fort Worth, where leaders are known for working to find common ground, they agreed.

Fort Worth has a political culture in which elected officials strive to live up to the expectations of others, Granger said, and citizens and neighborhood groups worked together to address problems.

Now, in Congress, “instead of finding solutions, it’s ‘don’t blame us,'” she said.

Davis, a Democratic senator for Texas District 10, said it’s no better at the state Capitol, where she is in her third term.

“It’s an evolution of what has happened through redistricting, on both sides of the aisle,” she said.

“We have created these very partisan districts … and we lost the ability to have a conversation in the middle — where most people are.”

Davis said she has seen a shift in Republican Lt. Gov. David Dewhurst’s approach this legislative session after he lost his U.S. Senate bid last year.

But she remains optimistic about bipartisanship because of state leaders such as House Speaker Joe Straus and state Rep. Charlie Geren, R-Fort Worth, Pete Geren’s brother.

“I do still have some hope,” she said.

She said she is trying to partner with Republican House members on bills and to find GOP legislation in the Senate that she can support.

Granger said there’s “some hope” that members of Congress will work together on issues such as immigration reform.

“Both parties believe it’s important to address this,” she said.

“The last time, the extremes took over.”