Three-time All-American doubles player for men’s tennis from 1992-96, Roditi now is back with the program as head coach after five years as the lead national coach for the United States Tennis Association. 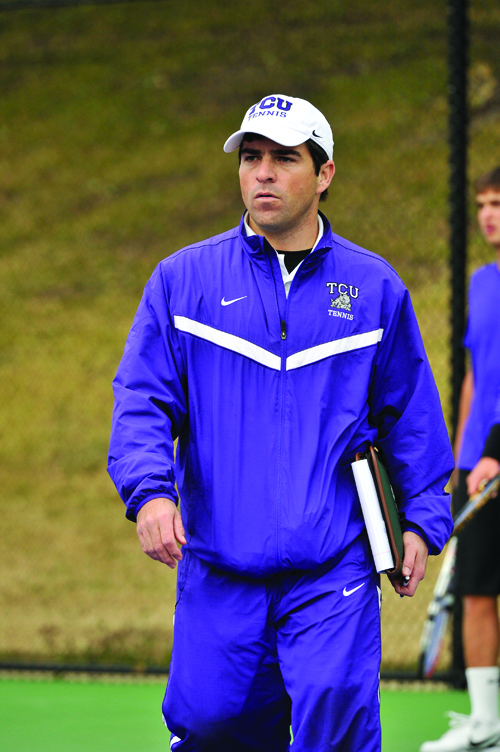 David Roditi '96 took over Men's Tennis in the fall and has them competing for a MWC crown this spring.

Three-time All-American doubles player for men’s tennis from 1992-96, Roditi now is back with the program as head coach after five years as the lead national coach for the United States Tennis Association.

What made you decide to return to TCU as the coach of the men’s tennis program? My heart and how I feel about TCU. It’s my home away from home. I spent the best moments of my life here and developed some of the best relationships I have in tennis here. I was happy in California. The USTA is a great place to work, but this was the one job that really means a lot to me. Now, I want to influence my alma mater in a positive way.

How would you assess the program you have taken over? It’s not like it was when I was here. We have beautiful, first-rate facilities. There are lights and a big scoreboard. Extra uniforms. We didn’t have that. The players we have are good, but the tennis is not where I think it should be. I think we’ve lost our edge. It’s a culture. You have to create a mind set that you have to prove yourself to the rest of the nation every time you go out. You have to train like that. You have to compete like that.

You are doing all kinds of things to connect better with fans, and it’s translated into some good crowds. When I played here, we used to play a lot of our matches at 1 p.m. on Wednesdays or Tuesdays. Not a lot of people can make it at that time. So, this year, we moved a lot of our matches to the evenings. We had a record crowd for the Texas A&M match, and I heard a lot of positive comments about that. It’s going to grow the more we do it. Fans will get to know the players and support them. We have a good tennis community here, and they’re going to enjoy college tennis. It’s not like watching Wimbledon. It’s team tennis. There’s more excitement with players and coaches cheering on each other during matches.

Have you reached out to your old coach, Bernard “Tut” Bartzen? I meet with him over lunch once a week. He’s not a fan of the music we play between matches. But he’s an icon for the program, and he’s still like my coach. He is a great resource to have as the program continues to grow.