New-fangled iClicker used by some faculty members to replace paper tests. Students give it mixed reviews. 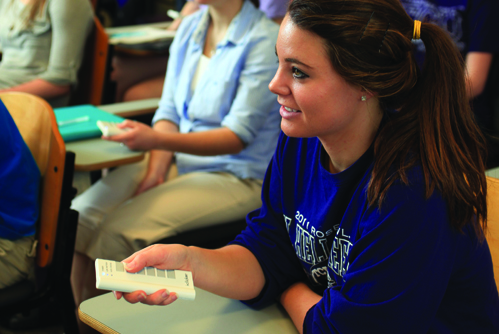 Mary Elizabeth Osborne, a sophomore business major, uses the iClicker to check in at the beginning of Mark Dennis’ World Religions class. Dennis also uses the devices for periodic quizzes in the class. (Photo by Carolyn Cruz)

New-fangled iClicker used by some faculty members to replace paper tests. Students give it mixed reviews.

Professors are embracing a new handheld device they can use to take roll, test students’ comprehension and save a few trees in the process.

Religion professor Mark Dennis was among the first to use the device, called the iClicker, for his Introduction to Religion class, in part because it reduces paper consumption. For example, using the device for 20 quizzes throughout the semester in the class of 40 students saves an estimated 800 sheets of paper.

Jeff King, director of the Koehler Center for Teaching Excellence, said faculty who are interested in trying out iClickers can check out a set for a “test run.”

“If the test is successful and instructors decide they want to begin using clickers in a subsequent term, they have enough lead time at that point to include in the syllabus the requirement that students have clickers for future classes,” he says.

Developed by a team of four University of Illinois physicists, the device is now being used by more than 500,000 students in North America. Currently the device can only be used to record responses to multiple-choice questions, but a new model is in the works that can record text.

Students have given the device mixed reviews. Some enjoy the ease of use, but others have complained about having to purchase the device, which costs around $40 at the TCU Bookstore.

“It’s important to note that the same iClicker can be used in all classes in which faculty use the device,” King adds.