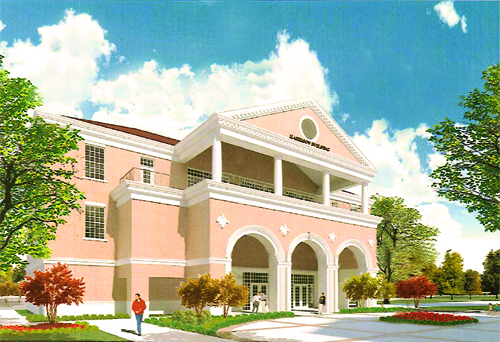 he $11 million Oliver and Nell A. Harrison Building is expected to be completed in January 2012. (Courtesy Brite Divinity School)

The three-story building will be designed to complement the Georgian, salmon-bricked style of the chapel, and will feature nine multimedia-equipped classrooms, office space, a graduate reading room and a technology-rich preaching laboratory to be named for Granville and Erline Walker.

A conference center on the first level will provide a setting for large lectures, receptions, dinners and musical events. Divisible by three units, it will also serve as space for breakout sessions and additional classroom areas. It is expected to open in January 2012.

“We outgrew the Moore Building a good while back,” said Newell Williams, Brite’s president. “The Harrison Building will fulfill a long-term need for us.”

Built in 1952, Moore was constructed with six offices for about 50 students. Brite now enrolls more than 240 and has 23 faculty members. Operating out of only three classrooms, the school has converted closets and rest rooms into office space and shifted some classes to University Christian Church.

The addition will also include a garden plaza between Moore, the chapel cloisters and the new building and will feature a limestone sign moved here from the regional southwest office of the Disciples of Christ.

“It’s a symbolic linking of Brite and the Christian Church of the Southwest,” Williams said.

Brite’s Board of Trustees approved the project in November after a five-year campaign had generated $12 million. In August, the school received a $1.5 million challenge grant from the J.E. and L.E. Mabee Foundation, which offered the money contingent on the school raising $1.2 million in matching funds. The school is just over half way to that goal, Williams said.

The new building is named after Oliver Harrison, who served on the school’s board when it voted unanimously to admit African-American students.