Students followed Tim Halperin on reality show and took on his cause as part of a class project on social media. 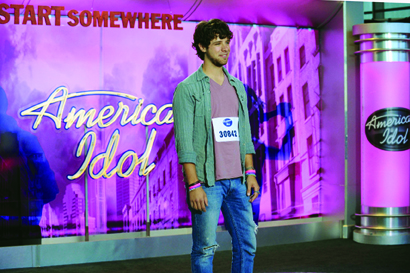 Tim Halperin said he will release a CD in September and play shows this summer as he begins his career after "American Idol." (Photo courtesy FOX)

Students followed Tim Halperin on reality show and took on his cause as part of a class project on social media.

He flashed the Frog sign on “American Idol” on the night he was eliminated, as upbeat as he’d been the entire reality show journey. Tim Halperin ’10 reached the hit show’s top 12 males before failing to advance in March.

Halperin’s run on the show garnered broad backing of the TCU community, including students who took on his cause as part of a class project on social media.

But Ann Louden, TCU chancellor’s associate for external relations, said Halperin was honored by the support from fellow Frogs.

“Tim is very grateful for all the support from ‘Team Tim’ and TCU,” she told the TCU Daily Skiff.

Louden was among Tim’s supporters in the audience who were cheering him on.

“On commercial breaks I saw the true Tim,” she said. “He was going over to all of the contestants and giving them hugs, being supportive.”
“Team Tim” also included students in an advertising class; senior marketing major Mike Vosters, a close friend of Halperin’s; and other student supporters who worked to build a fan site to promote his chances.

“It was great to have everyone united under a common cause,” Vosters told the Skiff. “We all came together and created a whole website in 36 hours. We were trying to start a movement and really wanted to make a difference in his life. Now, I can’t wait to see Tim come home and start working with him again.”

Halperin said the experience validated that he’s justified in pursuing a music career.

“Performing in front of 20 million people on television does wonders for one’s fan base,” he said. I got my name out there for several weeks. It’s a great launching pad.”

Halperin plans to release an album in September.