Joshua “Josh” Simpson ’13 has a career mission: to help organizations merge financial success with social impact. At 27, he has already helped rebuild a company’s culture after a sexual harassment scandal, aligned leaders on big volunteer-based projects and advised a health care organization on how providing child care could solve its employee absenteeism problem.

Now, as manager of external affairs strategy and engagement for Capital One Financial Corp. in Virginia, he is developing the financial giant’s social responsibility initiatives, including how it engages stakeholders. Josh Simpson said he believes in empowering people to grow and give them decision-making authority over their work. Photo by Lisa Helfert

“I believe in empowering people to grow and give them decision-making authority over their work,” said Simpson, who lives in Washington, D.C. “For me, leadership doesn’t have to flow from a specific title or position.”

His quiet leadership style belies the fast track he has traveled since leaving TCU with bachelor’s degrees in political science and entrepreneurial management. In 2016, Simpson earned a master’s in comparative social policy from the University of Oxford in England.

Although Simpson, who grew up in Sherman, Texas, began TCU as a pre-business major on a full-tuition scholarship, he was more interested in people than portfolios. A chance encounter with the late Jim Wright, the Fort Worth congressman who served as speaker of the U.S. House of Representatives and later taught at TCU, prompted Simpson to delve into political science and enroll in Wright’s last class in 2010.

“Having personal experience with someone who influenced government policy made me realize leaders are normal people and accessible,” Simpson said. “[Wright] was adept at politics and wielding power, but his time in Congress came from a position of service and wanting to improve society.”

Simpson took his first job with tech giant Google. Hired to do recruiting and data analysis, he focused on reaching former Google employees (Xooglers) to ask why they left and try to recruit them back.

“At tech companies like Google, there’s often flexibility in how a role will evolve,” Simpson said. Google also reinforced his belief in culture as he learned how a large company views employee volunteerism and social responsibility. (Its Loon balloons deliver emergency connectivity to places such as Puerto Rico after Hurricane Maria devastated the island in 2017.) 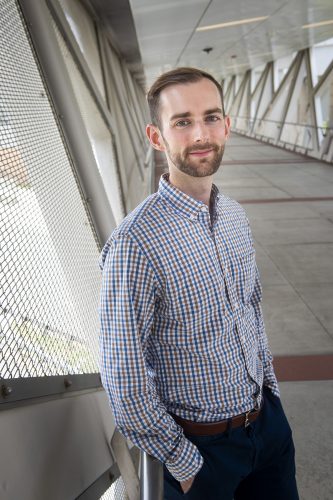 Josh Simpson’s first job was with tech giant Google. He was hired to do recruiting and data analysis. Photo by Lisa Helfert

Although Google was a “great first place to work,” Simpson said, it was a detour from his social policy goals. After two years, he enrolled in graduate school at Oxford, resuming an interest in poverty — his TCU senior thesis delved into reducing poverty through entrepreneurship. A trip to Uganda between TCU graduation and his Google job spurred him and a friend, Graham McMillan ’14, to bicycle 850 miles from Dallas to Atlanta in 2014, raising almost $25,000 to help build a church and community center in that country.

Simpson continued to pursue social policy as a consultant for FSG, a Washington, D.C., company that promotes the shared value concept, helping organizations such as General Mills, Lululemon Athletica and Toyota meet community needs while growing their businesses.

At FSG, Simpson learned the importance of uniting leaders on a social impact strategy, such as reducing poverty. There, Simpson worked on a project in New York state with nonprofit organizations, business and civic leaders, and universities to reduce racialized poverty, aligning them on improvements in social services, outreach and support services.

His next step was to join Thruue, a Washington, D.C., consulting firm that focuses on culture change, as a senior consultant.

Thruue manager Eve Kager recalls how Simpson last year took control of a tense meeting after a client reacted strongly to cultural findings. Simpson accepted the client’s perspective, talked the person through the experience and tied it to the data, she said.

“It was a moment that as a group we could have lost credibility,” Kager said. “He gained trust with that person.”

Simpson first practiced such skills at TCU. As president of the Student Government Association, he heard some student groups felt excluded. He appointed a commission on diversity to create a report about the situation and challenged TCU leaders to create a university task force to focus on inclusion.

“For me, leadership doesn’t have to flow from a specific title or position.”
Josh Simpson

“Josh knows how to bring people to the table,” said Kathy Cavins-Tull, vice chancellor for student affairs at TCU and one of the university leaders whom Simpson challenged. “He was super thoughtful about what would make an impact and not just throw spaghetti at the wall.”

The technique revolves around listening and empathizing — skills that Simpson said he learned while studying leadership theories, especially servant leadership, at TCU.

“I’m fine with observing rather than being the first to speak,” Simpson said. “I’d rather listen, synthesize what others have said and then help create a way forward.” In a Q&A, the vice chancellor for student affairs talks about how TCU’s safety net stands to help students succeed.