Like a real-life Atticus Finch on a quest to correct an injustice, defense attorney John Thomas ’93 worked nearly 10 years to free an innocent man convicted of murder and rape.

Thomas inherited Christopher Tapp’s case when Thomas became a public defender in Idaho Falls, Idaho. Even with an annual caseload in the hundreds, Thomas immersed himself in Tapp’s appeal, ultimately winning the man’s release from prison in March 2017. “John truly believed in my innocence, and he believed in me,” said Tapp, who spent 20 years in prison for a crime that remains unsolved. “He stood his ground against judges and against prosecuting attorneys when it seemed like there was no way we were ever going to win.”

Angie Dodge was killed in 1996, and her mother, Carol, worked alongside Thomas to advocate on behalf of Tapp. “John is a one-of-a-kind individual with unbelievable integrity, the kind of person you just don’t see in a profession like his,” Carol Dodge said. “He cares about his clients and fought against the system. He is truly a good man.”

As a child in Hattiesburg, Mississippi, Thomas had visions of standing before a judge and jury arguing cases, similar to the trial scenes depicted in To Kill a Mockingbird.

“I inherited my passion for the law from my father, who was in the U.S. Air Force for 22 years and felt it was too late to go to law school when he got out,” said Thomas, the seventh of nine children. “But there was no one more thrilled that I got into the practice I did.”

After a stint at a junior college in Florida, Thomas transferred to TCU in 1991 as a student-athlete in diving. “It was an incredible experience to be on the swim team and be a part of that tradition,” said Thomas, who was all-conference in 1991 on the 1-meter springboard.

A political science major with a minor in English at TCU, Thomas spent several years after graduation as a high school diving coach in Utah and working at a law firm in Salt Lake City.

In 1999, Thomas graduated from what became the Western Michigan University Thomas M. Cooley Law School. He had an affinity for court proceedings thanks in part to his participation in the law school’s award-winning trial team.

When his wife, Jolyn Thomas, was hired as a news anchor for a TV station near Flint, Michigan, Thomas found a job as an insurance attorney, a position he never enjoyed. His wife paused her career for a year after the birth of their first child together, Jacklyn, now 17. The couple also has two sons: 13-year-old Jordan and 30-year-old Marcus McDade, whom Thomas raised.

Upon re-entering the job market, Jolyn Thomas was hired at a TV station in Idaho Falls. She began hosting a radio talk show in the eastern Idaho city the same year her husband joined the Office of the Public Defender in Bonneville County, Idaho.

Even though Thomas knew almost nothing about the Tapp case when he started looking into his client’s previous criminal appeal, the defense attorney began to question the police department’s conduct during the investigation. In his office in Idaho Falls, public defense attorney John Thomas, who worked with the Idaho Innocence Project, shows some of the boxes of legal files he used to mount multiple appeals in Christopher Tapp’s 20-year criminal case. Photo by Otto Kitsinger

When 18-year-old Angie Dodge failed to show up for work at a beauty supply company on June 13, 1996, two of her co-workers went to the apartment she had moved into three weeks earlier. The young woman’s body was lying on the floor of her bedroom in a pool of blood resulting from 14 stab wounds.

Investigators spent months interviewing local men who knew the victim, including Tapp. After his best friend was arrested in Nevada for rape, police zeroed in on Tapp as a way to get to suspect Ben Hobbs. Investigators sought a warrant for Hobbs’ DNA to see if it matched the semen found on the victim.

DNA testing already had proved that Tapp — one of many local men to volunteer a sample — had not sexually assaulted Angie Dodge. Hobbs’ DNA was not a match either, but by that point Tapp had confessed to holding down Angie Dodge during the rape and murder.

In December 1998, a jury found Tapp guilty based on his confession. The conviction carried a prison sentence of 30 years to life.

“The polygraph evidence was really incredible,” said Thomas, who noted that during a three-week period authorities interrogated his client between 120 and 150 hours, often without the presence of his court-appointed defense attorney. “The police had convinced Chris that he did this crime and then repressed the memories, and Chris had really come to believe that this polygraph machine was testing his subconscious to tell him if he was there or not.”

State prosecutors also withheld some of the interrogation videotapes, a situation that hamstrung Tapp’s first public defender at trial. In 2002, Tapp’s attorney appealed the conviction, but a judge dismissed the petition.

In March 2009, Thomas filed a second appeal. While awaiting a decision on that motion, Thomas filed another appeal in September 2012. Both appeals were dismissed.

“What’s really amazing about this whole case is how John never gave up, even in spite of the setbacks,” said Jordan Crane, the public defender in Bonneville County and Thomas’ boss.

“It didn’t sit well with him that an innocent man was in prison,” Crane said. “I cannot even imagine the amount of personal time he spent working to free Chris Tapp.”

“What’s really amazing about this whole case is how John never gave up, even in spite of the setbacks.”
Jordan Crane

For his part, Tapp knew the losses were discouraging for the appellate attorney. “Over the years, we would go to hearings and we kept on losing,” Tapp said. “It didn’t matter what we would bring up as evidence, we would still lose. But John truly put his heart and soul into this case. He wasn’t going to stop if there was even a chance.” 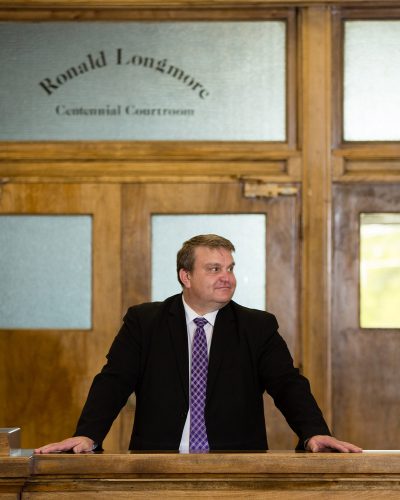 John Thomas, an attorney with the Bonneville County Public Defender’s Office, represented an Idaho man for a decade before securing his release from prison at a final hearing in March 2017. Photo by Otto Kitsinger

After losing two appeals, the defense attorney went back to the evidence and developed a new idea based on emerging technology. “There’s something called touch DNA, which is DNA that gets left behind by even the lightest contact,” Thomas said.

“In his confession, Chris told police that he held Angie down. We were able to have swabs of her hands tested for his DNA, and it wasn’t anywhere,” Thomas said. “I knew in my heart that my guy had not done it, and, in fact, we showed that Chris Tapp’s DNA was nowhere to be found in that apartment.”

Thomas reached out to Mike Heavey, who founded the nonprofit Judges for Justice in the aftermath of the controversial conviction of his neighbor, Amanda Knox. The University of Washington student was convicted of the 2007 murder of her roommate, a British exchange student, in Italy. Eight years later, the Italian Supreme Court cleared Knox of all charges in a case that garnered worldwide attention.

Two weeks after retiring as a superior court judge in the Seattle area, Heavey had dinner in Idaho Falls with John and Jolyn Thomas and Carol Dodge. After returning home, Heavey spent numerous hours reviewing the police interrogation videos. Pausing along the way, Heavey told Thomas that he thought Tapp had grounds for a new appeal based on the prosecutors’ failure to turn over several of the videotapes to the public defender at the first trial.

“John has strength and courage and the integrity to keep representing his client even when there was pressure not to,” Heavey said. “But despite the ups and downs, he and I shared a faith that the whole thing was going to work out for Chris, that we were going to find a way, which eventually happened. It was extremely rewarding.”

Thanks in part to Heavey’s assistance along with Dodge’s continued advocacy, national news media including CBS’ 48 Hours and NBC’s Dateline aired episodes about the case.

“I was not — am not — going to let this drop,” Dodge said. “I want justice for my daughter, and that meant getting Chris Tapp out of prison for a crime he did not commit.”

Thomas filed a new post-conviction relief petition based on two issues: the interrogation videos and the absence of touch DNA.

“John does mainly trial work,” Heavey said. “But he did an excellent job with the post-conviction relief petitions, identifying all the right issues.”

Around the time of that fourth appeal, various TV news crews were hiring experts in false confessions while also talking to experts including Dr. Greg Hampikian, a DNA authority who founded the Idaho Innocence Project to help free the wrongfully imprisoned.

“The prosecuting attorney and police were getting calls from these media entities, which put the pressure on and was becoming a problem for them,” Thomas said.

In spring 2017, some 30 witnesses were poised to appear at Tapp’s appeal hearing, 10 of whom were arriving from across the country. With the national media descending on the Bonneville County Courthouse, Thomas made the pre-emptive move to bring Tapp early to Idaho Falls from the state prison in Boise, about four hours away.

“The prosecutor knew that he had already lost in the court of public opinion,” Thomas said.

A negotiation between the prosecution and the defense saw Thomas and Tapp walking away from the table in despair, thinking an agreement would not be reached. Then came an eleventh-hour resolution.

The prosecutor’s office would withdraw the rape charge so Tapp wouldn’t have to spend his life on the sex offender registry. The murder conviction would remain but with an amended sentence of a 20-year fixed term, which Tapp already had served. Also, when freed, he would not be on parole.

A few days after the hearing, Thomas and Tapp were greeted with the cheers of hundreds of supporters as they walked from the courthouse. Carol Dodge was the first to throw her arms around Tapp, with Thomas’ wife and younger children looking on.

“It was the greatest day as an attorney I ever had, ever thought of having,” said Thomas, who is working on two death penalty cases. In his role as chief deputy public defender in Bonneville County, he tackles his office’s high-profile cases.

Tapp, meanwhile, has married and works for a company in Idaho Falls that makes potato bags. (In July 2018, the Starz documentary series Wrong Man featured the Tapp case in two episodes: “The Confession” and “Flawed Freedom.”)

“Sometimes [public defenders] get a bad rap because of the immense caseload we have. Sometimes people have a negative impression of public defenders and what we do,” Crane said. “But what John did shows how dedicated we can be and how we fight every day in the trenches for justice.”